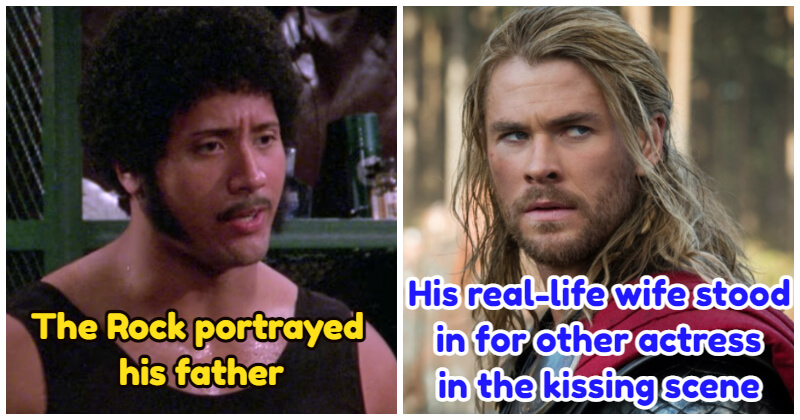 Acting is a unique profession because it demands specific skills such as understanding the part of the play and performing it in the movie. The great movies are just a part of the experience. There is a lot of interesting stuff that happens behind the scenes or even in actors’ careers. Most of us don’t notice or have no clues about them. However, lucky for us, some curious viewers managed to dig up these secrets and share them with the world.

For example, Daniel Radcliffe, star of the “Harry Potter” films, knows first-hand about the discomfort caused by nickel allergy. Throughout the movies, the images of Harry Potter are attached to the glasses, but many might not know that Daniel Radcliffe suffered for a long time with bumps around his eyes. The actor overcame the difficulty during filming and Harry Potter became an iconic role in his acting career.

We discovered some interesting facts about actors’ careers that certainly make you shock. Dwayne Johnson portrayed his father, Rocky Johnson, in an episode of “That ’70s Show”. Johnson followed in his father’s footsteps by becoming a professional wrestler under the name “The Rock”.

#2 Daniel Radcliffe was allergic to the Harry Potter glasses Daniel Radcliffe revealed that he was allergic to the glasses he had to wear when portraying Harry Potter. His glasses gave him a rash around his eyes and it took the filmmaker a week to realize that it was the glasses. During the audition for Rocky, Carl Weathers criticized Sylvester Stallone’s acting. His insult helped the actor land the role of Apollo Creed. When “Twilight” first entered its preproduction and casting stages, plenty of actors were listed for the part of Bella. Kristen eventually got the part; however, Jennifer Lawrence originally auditioned for the role. Oscar-winning actor Tom Hanks has revealed that he paid for Forrest Gump out of his pocket. The actor shared that some scenes were so important but the budget wasn’t enough. He and the director had to pay for them.

#6 Chris Hemsworth’s real-life wife stood in for Natalie Portman in the kissing scene at the end of “Thor: The Dark World” Chris Hemsworth and Natalie Portman shared a passionate kissing scene at the end of “Thor: The Dark World”. Hemsworth’s real-life wife, actress Elsa Pataky, threw on a wig and filled in for Portman because of the conflict of her schedule. Robin Williams amassed over 100 acting credits and one of his roles was Mrs. Doubtfire. The director set up a lot of cameras to make sure that his reactions were captured. In an interview, Pratt revealed that he stole pieces of his Star-Lord costumes so that he could visit sick children in the hospital. The costumes included a jacket and some of the wardrobe.

What Is The Best Cartoon Bear So Far? 5 Best Animated Bears

10 Times Actors Took Method Acting Too Far And Shocked Everybody