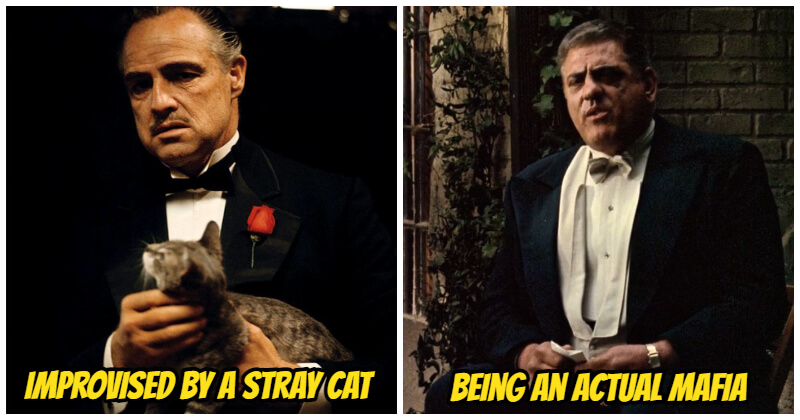 Although it’s been half a century since The Godfather of 1972 was released, the movie still be the best movie of all time (according to the ultimate list of IMDb). Needless to say, it contains every factor which contributes to a “perfect movie”, including a talented director, a successful script, and dedicated actors. They all did an excellent job in giving us not only a movie but a masterpiece.

However, not everyone can pay attention to all the details in the movie. They are so excellently implied that we cannot realize their meaning the first time we see them. Indeed, these incredible details, which are related to the movie, will have you scrolling all the way down to the end.

Thanks to the Reddit community, we would celebrate the 50th anniversary of the 1972 Godfather with 17 incredible details. And let us know which one impressed you the most in the comment section!

#1  Watched the remastered “Godfather” (1972) and noticed for the primary time the Visual Foreshadowing of the famous “Sleeps with the Fishes” line.

I know this is all about movies but if you get a chance, read Puzo’s book. There’s not many movies that does a book justice but this certainly does. Luca Brazi is fearsome. – Undiecover22

#2 In “Get Shorty” (1995), Jimmy Capp was holding glasses while getting a massage. The actor, Alex Rocco, played Moe Greene in “The Godfather” (1972), in which he is in an iconic scene getting a massage and putting on his glasses to see who comes confront of him. #3 A reference to Micheal Corleone, Sollozzo and Capt. McCluskey in the famous restaurant scene in The Godfather (1972) can be spotted in Hot Shots! 2 (1993) And in Annie Hall which came out the same year, Woody Allen says to her, “I’m standing with the cast of The Godfather.”- 48crash

#5 The “kiss of death” (In Italian, “Il Bacio Della Morte”) was a sign used in the Mafia that signifies that a member of the crime family has been marked for death, commonly as a result of betrayal. The signal also symbolically used in this scene of The Godfather Part II (1974). #6 In The Godfather (1972), Marlon Brando wanted Vito Corleone to look like a bulldog so he stuffed his cheeks with cotton during rehearsal, but in the actual movie he wore special dentures. Robert De Niro had a smaller version made to wear in Part II.- FlintRockpunch

#7 Lenny Montana, who portrayed Luca Brasi in “The Godfather” (1972), was a real mafia enforcer sent by the Colombo family to oversee the filming. Coppola cast him, but Montana was too nervous about acting with Brando and kept forgetting his lines, which was later included as a character trait. And may their first child be a masculine child- used_to_be_a_niceguy

#8 When James Caan broke an FBI photographer’s camera and then threw money on the ground in ‘The Godfather’ (1972), that was improvised. James Caan was so powerful as Sonny he could knock people out with punches that didn’t even connect.- TooShiftyForYou

#9 The Godfather (1972)- the cat Marlon Brando was holding in the opening scene was a stray found on the Paramount studio lot. Its clang was so loud that they had to repeat most of Brando’s dialogue. I would do this. I love cats.- LazyTheSloth

#10 When filming The Godfather, Marlon Brando would often read his lines off cue cards, sometimes even stuck on other actors, whose backs were to the camera. My favorite Brando story: David Thewlis, his ‘The Island of Dr. Moreau’ costar, said he had to be fed lines through an earpiece, and the earpiece would occasionally pickup other frequencies.

“He’d be in the middle of a scene, and suddenly he’d be getting police messages. Marlon would repeat, ‘There’s a robbery at Woolworth’s.”’- [deleted]

#11 In “The Godfather”, Michael’s fiancée stumbles. This moment reflected to Mario Puzo’s book. She did that intentionally since she’s good at climbing and walking on such surfaces, she simply wanted him to touch her before marriage. Their relationship was really about to blow up.- TooShiftyForYou

#12 In The Godfather (1972) Clemenza showed Michael how to cook spaghetti for a large group of people. In The Godfather Part III (1990), a large pot of spaghetti can be seen in the “They Pulled Me Back” scene, implying that Michael listened to Clemenza. You need a big pot and all the pasta ina da house.- 8bitbebop

#13 In The Godfather(1972) The smack that Vito gives Johnny Fontane wasn’t in the script. Marlon Brando improvised the smack and Al Martino’s confused reaction was real. According to James Caan, “Martino didn’t know whether to laugh or cry.” Look how they massacred by boy…- muffdyvermcgyver

#14 In the Godfather (1972) every time there were oranges on the screen, death was coming. Here is just an example.

Orange is the color of death in the Italian organized crime world.- Davge107

#15 In the final interaction of Marlon Brando and Al Pacino in the movie Godfather, let’s notice the eyes of Marlon Brando. His eyes kept peering off in different directions. That was because he was reading his lines in those directions. Brando refused to memorize the dialogues in the later part of his career. He did the same thing during filming for The Island of Dr. Moreau. He required an ear piece so he didn’t have to memorize anything. Supposedly the ear piece kept picking up radio chatter as well so he’d say random things he heard instead of the lines and they had to keep re-filming scenes because of it.- angela0040 That’s the Hearst Mansion and it’s up for sale for $165,000,000. Randolph Hearst and Marion Davies lived there. The main house is 50,000 square feet and has Bullet proof glass windows. The guest houses and main house have a combined 28 bedrooms and 38 bathrooms.- darrellmarch

#17 In the infamous baptism scene at the end of The Godfather, it was actually Sofia Coppola that played the infant nephew of Michael that was being baptized. I imagine some would say her performance here is better than in the third film.- MrCaul