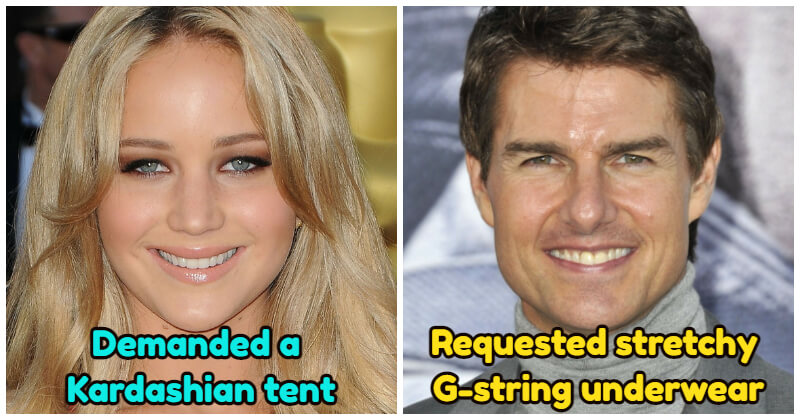 Acting is a job, but sometimes it is called show business. Before an actor is officially cast in a movie and has signed on the dotted line, a wealth of negotiations take place behind the scenes. Some famous actors use their star power to make particular demands before accepting roles.

Sometimes, the demand is about the way a character is portrayed, adding a scene or more, and even proposing to increase salary. While many of those are reasonable, some are downright ridiculous, giving us a glimpse into the mindset of actors who think showing up to work deserves a reward.

Below are 10 actors who made mind-boggling requests to appear in a movie. The Daily Star reported that Tom Cruise required custom-made G-strings for him to wear during the filming of stunt scenes. They needed to be made from soft and stretchy material so that he felt comfortable and flexible when performing some action sequences. The crew members on the set of “Mother” made Jennifer Lawrence a “Kardashian tent” to help her decompress after intense scenes. For the actress, the refuge was her happy place. David Fincher, the director of the film “Gone Girl”, asked leading actor Ben Affleck to wear a New York Yankees cap in a scene. The actor straight up refused because he was a fan of the Yankees’ rival. Many might not know that when filming the comedy horror “Vampire’s Kiss”, Nicholas Cage insisted on having a real bat on the set. He wanted to make the scene more realistic but his demand was refused.

#5 George Clooney requested a beach hut and a private garden When shooting the new film “Gravity” at London’s Shepperton Studios, Geo Clooney requested a luxury chill-out complex. The actor asked the filmmaker for a custom-made beach and a private landscaped garden. Lea Michele admitted that she refused to scream while filming her horror series “Scream Queens”. The actress was afraid of hurting her voice.

#7 Will Smith asked for a $2 million trailer While filming for “Men in Black III”, Will Smith requested two luxurious trailers. One of them was used just to accommodate his gym equipment and the other had a fully-equipped kitchen with Italian cabinets and arched windows.

#8 Will Ferrell requested a mobility scooter The title for the most bizarre requests goes to comedian Will Ferrell from his promotional comedy tour for “Semi-Pro”.  He asked for an electric scooter, a painted rainbow on wheels, and a 15-tall fake tree. Daniel Day-Lewis was in the role of a man, diagnosed with cerebral palsy in the 1908 movie “My Left Foot”. He wheeled around the set in his wheelchair and asked crew members to spoon-feed him. A source said that Bruce Willis was offered 3 million dollars for four days of working shooting in Bulgaria for the movie “The Expendables 3”, but he wanted to get 4 million dollars. The demand was refused. The actor didn’t act in the movie and his character went to Harrison Ford.