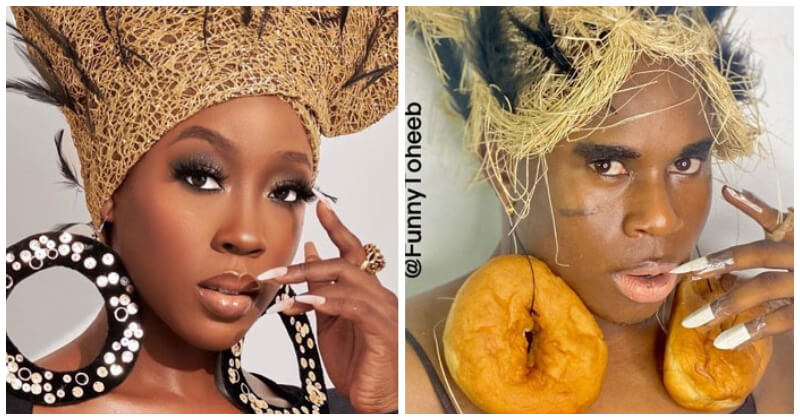 Celebrity fashion is always an interesting topic to be discussed by the media and public. Celebrities spend a fortune on their fancy designer dresses to show off luxury outfits. However, a funny guy proved that it doesn’t necessarily take a fat wallet to recreate the dazzling, fashionable, and sometimes bizarre looks of your favorite celebrities.

The guy called Funny Toheed, from Nigeria, takes the most ridiculous celebrity fashion wins and fails and brings them to the next level with common materials available at home. He gently pokes fun at the super strange clothes that stars wear to prestigious events. His hilarious pictures have received tons of thousands of likes and comments from fans. The noodles are definitely better than hair. A nice snack if you are hungry. (Danielle Wigger) The excess lipstick is killing me. (Auntriarch) The original is so not-good that recreating it is overkill. (Stephanie Wittenberg) This could also be handy for grocery shopping. (Nunya Business) The recreation is just the end of the night. (ohjojo you/your’s) I actually think the one on the left is really pretty. It almost looks historic, but from an alternate timeline. Or something you’d see in a movie when they land on an alien planet. (Izzy Curer) I have something cooking in the oven litterally. (dream of delusion) Nana appears as if afraid to take a deep breath. But her dress is magnificent. The recreation is inspirational. (ohjojo you/your’s)

The first is a work of art, the recreation is inspired. (Kayjunmoon) The original headpiece looks like a cardboard cutout. I prefer the aloe. (xolitaire)

I bet the Statue of Liberty is jealous. (Barbara Cochrane) You could have tried to spray paint them black at least. (Rachel Benge) There is no difference. (Autistic apricot)

I think the recreation was better. The dress has no dents. (Tilly) It’s bread! Laughing to the point of tears. You can make sandwiches after the event! (Stephanie Wittenberg) The original is so cool though, I love it! And I laughed so much at that rake, the guy has a great sense of humour. (Random Panda)

Funny Toheeb’s dress looks much prettier and more elegant than the original! And the rake tops it all! (Stephanie Wittenberg) The paper on the nails. (Autistic apricot) The attention to detail is insane, even the nails! (Momogi)

Come in handy if you run out of silver ware. (Kristine Phillips) This was the best original outfit so far, actually beautiful, would be great at a big Hollywood event. But I gotta say, the CDs on the recreation are pretty hilarious. (Stephanie Wittenberg)