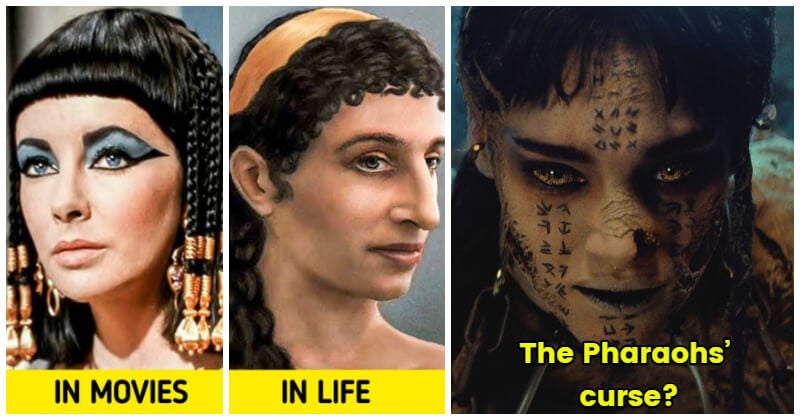 Movies are one of the most powerful propagators of pop culture, so whatever they show us in the form of images or ideas stays with us. In most cases, movies introduced us to the outside world, along with many clichés, myths, and stereotypes that can be found in almost any film. For example, Russia is the villain; any language that is not English is an alien language; surviving a fatal car crash, and more.

The cinema business is not only a vital reflection of our culture, but it also teaches us the different myths that we learned and believed in from numerous movies. This time, we addressed seven such myths from one of the world’s earliest human civilizations, Ancient Egypt. People often remember Queen Cleopatra of Ancient Egypt for her beauty. According to historians, however, her depictions vary by region, meaning no conclusion can be made for what she actually looked like.

#2 Traps and treasure in the pyramids There is a certain kind of satisfaction in witnessing the main characters experience the filmmakers’ favorite: traps and treasure. But here’s the thing: Although tombs in real life do have traps, they are usually very simple and cannot kill. To add insult to injury, you may be disappointed to know that most items have little-to-no-monetary value unless you’re an archaeologist or a historian.

#3 The Sphynx doesn’t have a nose thanks to Napoleon. To this day, what happened to the nose of the Sphynx remains a mystery. Some speculate that during Napoleon’s campaign in Egypt, soldiers practiced shooting at this particular piece. This theory, however, has been denied, due to the fact that the Sphynx had lost its nose even before Napoleon was born, with some works depicting this as early as 1755.

#4 Pyramids were built by slaves. The construction of pyramids was not to exalt the glory of the pharaohs who built them, but rather to glorify life after death. According to PBS, death is only the beginning of another one in the afterlife. There is a common belief the pharaohs hired slaves en masse to help with the construction process, though there has been proof that says otherwise. Source: Gods of Egypt/Summit Entertainment, Letter of the Mayor of Thebes Sennefer/Egyptian Museum of Berlin/Wikimedia Commons

Through movies, we know that the main writing language of Ancient Egypt is hieroglyphs. What we may not know is that there were multiple writing systems for various purposes. Ordinary people would use the more common demotic writing, whereas the hieroglyphs we see in movies were mainly used by priests in rituals and for inscribing stone monuments.

#6 The curse of the pharaohs When archaeologists discovered Tutankhamun’s tomb, people spread rumors of “the pharaohs’ curse” being unleashed onto the world. Thanks to The Mummy (1999), the curse became a very popular misconception, despite there being no proof of anyone having been affected by the curse. Nonetheless, it became a filmmaker’s favorite. Being one of the earliest civilizations of humanity in Ancient Egypt, life was tough for those who lived in it. Even pharaohs are no exception. Filmmakers, however, actively avoid discussing these hardships, which is why historical inaccuracies are abundant and inevitable in any movie that attempts to depict the Ancient Egyptian culture. This is one of the many common misconceptions you may find: Movies often depict the pharaoh as a majestic and powerful figure, both feared and revered by the people. But this is simply not true. In fact, they can be quite obese, due to their meals often containing sweet dishes, and therefore unattractive.

Which of these facts did you unexpectedly find to be false? Are you aware of other myths about Ancient Egypt in movies? If you are, please share them with us.