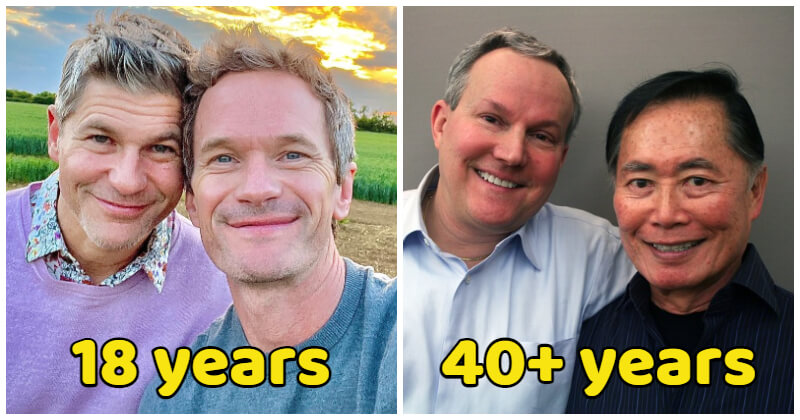 Being married to the love of one’s life is a true sign of fortune, especially if you are in a same-sex relationship and must deal with society’s prejudice and animosity. People who are in LGBTQ+ relationships have to deal with discrimination constantly. This is made even more difficult if you are a Hollywood personality who is constantly in the spotlight. But, in the face of love, some people persevere so that their love for each other can last. Here are 13 LGBTQ+ Hollywood superstars whose relationships have stood against the test of time. Decades, to be exact. These actors, comedians, musicians, authors, producers, directors, and executives are expanding opportunities and paving the way for representation. Lance LePere, an intern at Kor’s office at the time, introduced the couple. In 2011, they married.

#2 It has been more than a decade since Matt Bomer’s and Simon Hall’s intimate NYC wedding. The Magic Mike actor and Hollywood publicist lead a private life. In 2011, the pair married in a private ceremony. “”It was quite relaxed,” said Bomer to Out magazine. “Only our closest friends and family were present. There is a sense of comfort and legitimacy in knowing that it is legal. It’s difficult to put into words. I guess it’s just a sensation, something about saying vows in front of people who love and support you. “I believe it was beneficial to our family.” The couple has three children.

#3 Modern Family star, Jesse Tyler Ferguson, and husband Justin Mikita have been together for more than a decade now. During the early days of filming Modern Family, Jesse Tyler Ferguson and Justin Mikita met at a gym. After being together for over two years, the couple got engaged in 2012. Surrogacy enabled the couple to have their first child in July 2020.

#4 It has been 15 years since Tan and Rob France met on a dating app. Tan France admitted in an interview with the New York Post, “It made it simpler to date someone who was similar to me. I don’t use alcohol or smoke.” The couple received their son, Ismail France, via surrogacy on July 10, 2021.

#5 Comedian Wanda Sykes and wife Alex Niedbalski have been married since 2008. “In 2008, we were fighting for marriage equality. We asked [our] friends in lieu of gifts to support #NoProp8. Although CA Prop 8 passed, we eventually won marriage equality for the country via the Supreme Court,” wrote Wanda Sykes in an anniversary note for Alex.

#6 Cynthia Nixon and Christine Marinoni have been a New York City power couple since 2004. According to Oprah Daily, the pair met in New York in 2001 while lobbying for a non-profit education organization. They began dating after Nixon’s divorce from ex-husband Danny Mozes in 2004. The couple married in 2012 after getting engaged in 2009.

#7 It has been 18 years since Neil Patrick Harris and David Burtka went on their first date. In an essay co-written by the couple for Out magazine, they spilled the beans on their meet-cute, first date, and more. While Burtka was in a long-distance relationship in the 2000s, the pair met through a mutual acquaintance. They originally met in April 2004 and have been together ever since. “We started hanging out every single night, and it was simply relentless after three months,” Burtka writes. “We call at least eight times everyday and text at least 25 times per day.”

#8 RuPaul and Georges LeBar met on a dancefloor in 1994 and are still going strong. #9 George Takei and Brad Altman have been together since the ’80s. In the 1980s, George Takei and Brad Altman met at an LGBT club called LA Frontrunners. “Brad and I were both runners, and we both belonged to a gay running group. He was the club’s best runner. In addition to being attractive, “George Takei gushed to Oprah. In 2008, the couple married.

#10 It has been more than half a century since Lily Tomlin and Jane Wagner fell in love. Lily Tomlin narrated an interview with Variety, saying, “I fell in love with her in two minutes after a buddy brought her to my hotel room. She was dressed in hot trousers, stretchy boots that reached her knees, and a small rucksack. I’m not sure what it was, but I was head over heels in love.”

#11 Elton John and David Furnish have been in love with each other since 1993. According to The Guardian, the couple entered into a civil partnership in 2005 and married in 2014, once same-sex marriage became legal in the UK. “Our civil partnership was a huge step forward for people who had been campaigning for a long time — all the way back to the 1960s and 1950s in England, when it was really difficult to be gay and open about it. And it was a criminal offense “Elton revealed this at the time.

#12 Ellen Degeneres and Portia de Rossi started dating after VH1’s Big in ’04 Awards Show after they met 21 years ago. Ellen DeGeneres and Portia de Rossi met at a party in 2000 and became friends. They began dating in 2004, following VH1’s Big in ’04 Awards Show. After California legalized same-sex weddings in 2008, the pair married.

#13 It has been 20 years since Jim Parsons and husband Todd Spiewak met on a blind date. After 15 years of dating, actor Jim Parsons and producer Todd Spiewak married in 2017. They met on a blind date in 2002, arranged up by mutual acquaintances. While appearing as a guest on the show to promote his new Netflix film, The Boys in the Band, “This was a blind date set up by two friends of ours, one that was very close to me, Tammy who I went to grad school with, and [Spiewak’s] boss,” Parsons explained on the HFPA In Conversation podcast. They just so happened to be buddies. This may sound ridiculous, but each of them had a gay friend who was seeking for someone to go on dates with. That’s how it went down.”