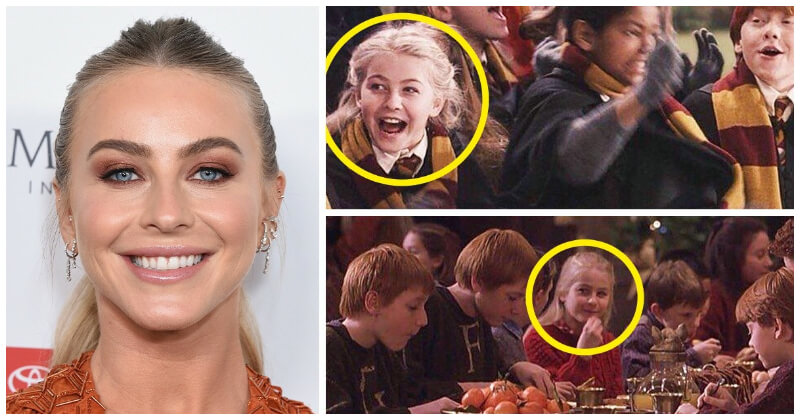 Everyone gets their start somewhere, and oftentimes, an actor’s first on-screen appearance happens way before they hit their big break. While these actors ended up becoming A-list talents, it’s still cool to think about how at one time, they were just performers at the beginning of their careers.

Believe it or not, many famous people got their start like other struggling actors in Hollywood – as an extra. They got a line or two, but most of the time, they stood in the background trying to be spotted, just wanting to make a few bucks and get their foot in the door of the film business. For example, George Clooney had a small role as a young man carrying in “Centennial”, and Channing Tatum was in the role of a boy in the church in “War of the Worlds”. Their characters are unrecognizable and viewers may have to look extremely hard to find them in the movie.

Below are 10 actors who used to be in minor roles in the famous movies, proving that we all start out small. Julianne Hough, who was known for winning “Dancing With The Stars”, played a minor role in the “Harry Potter” series. She was spotted cheering for Gryffindor in “Harry Potter and the Sorcerer’s Stone”. Julianne was trying her hands at acting initially but became successful as a dancer.

Regé-Jean Page rose to fame with his English drama “Bridgerton”, but many might not know, that he played an extra in “Harry Potter and the Deathly Hallows: Part 1”. Viewers can spot him in the background of Bill and Fleur’s wedding. Simu Liu is a popular Chinese-Canadian actor who made headlines by playing the role of Shang-Chi in the “Marvel blockbuster- Shang-Chi and the Legend of the Ten Rings”. Previously, he worked as an extra in some movies. He first starred in Guillermo del Toro’s Pacific Rim (2013) as a stuntman. Megan Denise Fox is an American actress and model who has built her brand by appearing in multiple major franchises. She began her career as an extra in Bad Boys 2 (2003) as a dancer in a club scene. Jesy Nelson, who was best known as a member of the girl group Little Mix, is a model and businesswoman. However, many might not recognize that Little Mix’s Jesy Nelson played a student in the movie “About a Boy”. Toby Jones achieved fame when playing Arnim Zola in “Captain America: The First Avenger”. Before that, he voiced Dobby in “Harry Potter films: Chamber of Secrets and Deathly Hallows – Part 1”. Source: © A Night at the Roxbury/ SNL Studios and co-producers

Eva Mendes made an appearance as a bridesmaid in the 1998 movie “A Night At The Roxbury”. Although she played a small role, her co-actor, Will Ferrell couldn’t stop staring at the image of her. Derek Hough had a tiny role, playing a Ravenclaw student holding an owl and heading home for Christmas in “Harry Potter and the Sorcerer’s Stone”. After that, he went on to compete in “Dancing With the Stars” and won the show a record-breaking six times. Channing Tatum got his start as an extra in the Tom Cruise/Steven Spielberg blockbuster “War of the Worlds”. You can spot him running alongside Cruise. Tatum even had a dialogue in that scene where the church gets blown up but it ended up being cut. Renée Zelwegger got her start in the world of extra work, starring as a beer-guzzling girl in the 1993 classic “Dazed and Confused”. Ironically, her big break came in 1994 when she starred in the horror film “Texas Chainsaw Massacre: The Next Generation”.