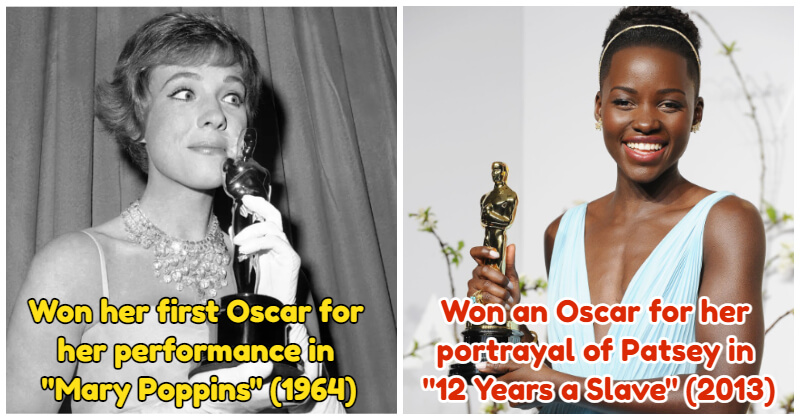 For some actors, it may take years or even decades to obtain the elusive Academy Award. Even then, they might never succeed in reaching that peak. Numerous accomplished performers are at the top of their game each year, and they are all deserving of the title. Winning an Academy Award requires a combination of great talent, good timing, and a little bit of luck, in addition to gifted ability.

Fans are shocked when a well-known actor like Leonardo DiCaprio waits a longer-than-expected period (in Leo’s case, 25 years) to win his first award. Then think about those who have never achieved success, like Tom Cruise and Glenn Close.

On the other hand, some actors, directors, and screenwriters get lucky right out of the gate: the first movie, the first Oscar. It’s rare to go from a relatively unknown performer to an Academy Award winner in less than a year, but it does happen. Here are nine celebrities who won Oscars for their first movies, which may surprise you. Dame Julie Andrews DBE is an English actress, singer, and writer who was born on October 1, 1935. Andrews started her acting career on the stage before transitioning to the big screen in 1964. She was awarded the Academy Award in 1965 for her performance in “Mary Poppins,” her debut film.

She made a joke in her victory speech, saying, “I know you Americans are famous for your hospitality, but this is ridiculous,” American actress, author, and activist Marlee Beth Matlin was born on August 24, 1965. She has won multiple honors, including four Primetime Emmy Award nominations, an Academy Award, a Golden Globe Award, a Screen Actors Guild Award, and a BAFTA Award. Matlin spent the majority of her youth acting on stage after going deaf at the age of 18 months. “Children of a Lesser God”, the 1986 film in which Marlee Matlin played the lead and won an Oscar, was her debut film. American actor and filmmaker Timothy Tarquin Hutton was born on August 16, 1960. At the age of 20, he became the youngest recipient of the Academy Award for Best Supporting Actor for his portrayal of Conrad Jarrett in his first film, “Ordinary People” (1980). The following year, Hutton hailed his father for being a great father after accepting the Academy Award for best-supporting actor. Jennifer Kate Hudson, usually referred to as J.Hud, is an American singer and actress who was born on September 12, 1981. Following the short-lived success of her “American Idol” stint, Hudson accepted her first acting role opposite Beyoncé in “Dreamgirls.” Jennifer Hudson was the star of her debut film. Her performance in the 2006 film “Dreamgirls” earned her an Oscar.

In 2007, Hudson won the best-supporting actress award thanks to her singing voice and acting skills. American actor and author Tatum Beatrice O’Neal was born on November 5, 1963. Her portrayal of Addie Loggins in “Paper Moon” earned her the youngest-ever Academy Award, which she received at the age of 10. (1973). Her father (Ryan O’Neal) was not nominated for an Oscar, which, according to her, caused him to become bitter.

In a 2020 CBS Sunday Morning interview, when asked if she hoped to win another Oscar, O’Neal stated that for her, the biggest accomplishment would be that she gave it her all during the audition process, that she landed the part she wanted, and that she was able to sustain herself through her efforts. Actress Anna Hélène Paquin was born in Canada on July 24, 1982, and now resides in New Zealand. At age 11, she became the second-youngest Oscar winner in history for her performance as Flora McGrath in the love drama “The Piano” (1993), for which she made her acting debut. Kenyan-American actress Lupita Amondi Nyong’o was born on March 1, 1983. She was born and raised in Kenya and attended Yale School of Drama, but before she even finished, she earned her first significant film part that would earn her an Oscar. She received the Best Supporting Actress Oscar for her portrayal of Patsey in “12 Years a Slave” (2013), for which she acknowledged Patsey’s ghost for guiding her during the filming.

She added in her award speech, “May this golden statue remind me and every little child that no matter where you are from, your dreams are valid. American singer and actress Barbara Joan “Barbra” Streisand was born on April 24, 1942. She has had a successful career spanning more than six decades in the entertainment industry and is one of the few performers to have won an Emmy, Grammy, Oscar, and Tony (EGOT).

For her breakthrough performance in “Funny Girl,” Barbra Streisand received the Oscar for best actress in 1969. She made a famous reference to a scene from “Funny Girl” when she quipped, “Hello, gorgeous,” while holding her Oscar during her acceptance speech.

In 2018, Streisand reflected on her first award and told Variety, “I must say, it was lovely to receive an Academy Award.” Haing Somnang Ngor was a Cambodian-American doctor, obstetrician, actor, and novelist who died on February 25, 1996. He is well known for his leading role as Cambodian journalist and refugee Dith Pran in the 1984 film “The Killing Fields,” which served as his acting debut. He was the first and only Asian to win best supporting actor for his work, thanks to his performance, which earned him an Oscar.

Despite receiving rave reviews for his performance, Ngor didn’t take part in any further movies that were deserving of an Oscar. When he was shot by gang members in Los Angeles in 1996, his career was tragically cut short.