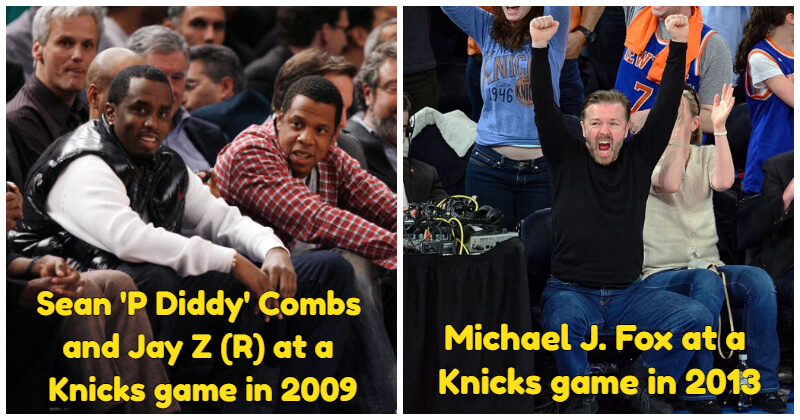 A list of famous celebrity Knicks fans has been compiled by us. Scroll down to read more and have fun!

A professional basketball team from the United States called the New York Knickerbockers is situated in the Manhattan borough of New York City. The team’s name is often shortened to the New York Knicks. The Knicks are an Eastern Conference team that competes in the NBA’s Atlantic Division.

Many well-known people are fans of the New York Knicks basketball team. While some just attend one game per season, some celebrities are so committed to their NBA team that they purchase season tickets. You may see your favorite celebrities there and watch some thrilling basketball at Madison Square Garden, the Knicks’ home court.

At Knicks games, have you seen any other famous people? Jon Stewart, Howard Stern, and Ben Stiller are just a few of the well-known comedians that are passionate New York Knicks fans. And Alicia Keys, Katie Holmes, and Olivia Wilde are some well-known ladies who support the Knicks.

Shelton Jackson “Spike” Lee, an American film director, producer, screenwriter, actor, and tenured professor at NYU, was born on March 20, 1957. Over the past four decades, Spike Lee has emerged as the unofficial spokesperson for the New York Knicks. Lee, the ideal fan, can always be seen in his allotted courtside seats, pulling for his team through good and bad times. American actress Kate Noelle Holmes was born on December 18, 1978. In the 1998–2003 television series “Dawson’s Creek,” she first rose to stardom as Joey Potter. Katie Holmes has frequently been spotted cheering on the New York Knicks from courtside during games.

American fashion designer, entrepreneur, and former actress Ashley Fuller Olsen was born on June 13, 1986. Although she was born in California, Ashley Olsen relocated to New York City to pursue a career in fashion and business. At that time, she also chose the New York Knicks as her basketball team. Christopher Maurice Brown, an American singer, songwriter, dancer, graffiti artist, and actor was born on May 5, 1989. Brown, along with Usher and R. Kelly, is one of the most well-known and commercially successful R&B singers in history, according to Billboard. Chris Brown, like many other famous people, would surely go to New York Knicks games anytime he has the chance, especially if he can sit next to superfan Spike Lee. American journalist, presenter, producer, and author Katherine Anne Couric was born on January 7, 1957. She is the creator of the multimedia news and production company Katie Couric Media. A daily newsletter called Wake Up Call is another thing she publishes. She enjoys watching the New York Knicks play at Madison Square Garden, which is considered the center of basketball. Raymond Albert Romano, an American stand-up comedian, actor, and screenwriter was born on December 21, 1957. He is best recognized for his Emmy Award-winning performance as Ray Barone on the CBS comedy “Everybody Loves Raymond.” He was an NBA enthusiast who spent years portraying a sportswriter on a popular show. He also supported the Knicks growing up in New York City and has been going to games ever since. Mary-Kate Olsen is an American fashion designer and former actress. She is also the sister twin of Ashley Olsen. Mary-Kate Olsen relocated to New York City, where she pursued a career in design and business, even though she was born in California. She also chose the New York Knicks as her basketball team at that time. American singer, songwriter, and actress Alicia Augello Cook, better known by her stage name Alicia Keys, was born on January 25, 1981. The award-winning singer, who was up in Manhattan, loves her native state so much that she created a whole song about it. She is frequently spotted cheering on the New York Knicks from courtside.

Emmanuelle Grey Rossum, an American actress, singer, and director were born on September 12, 1986. She is well-known for playing Fiona Gallagher in the 2011–2019 television series “Shameless.” Emmy Rossum, who was born and reared in New York City, developed a deep love for the New York Knicks as a child and still does. Heywood “Woody” Allen, an American film director, writer, actor, and comedian, was born on November 30, 1935. His career spans more than six decades and includes several films that won Academy Awards. He supports the New York Knicks as a passionate fan. Julie Anne Smith, better known by her stage name Julianne Moore, was born in the United States on December 3, 1960. She has been active in film since the early 1990s, and she is most recognized for her representations of emotionally damaged women in both independent and blockbuster films. Julianne Moore, a New Yorker by birth, is frequently spotted watching the New York Knicks from courtside at Madison Square Garden. American stand-up comedian, actor, and director Christopher Julius Rock was born on February 7, 1965. Although the comedic mastermind Chris Rock was born in South Carolina, he has long been a devoted supporter of the New York Knicks. Radio and television host, comedian, and author Howard Allan Stern was born in the United States on January 12, 1954. His radio program, “The Howard Stern Show,” which was nationally syndicated on terrestrial radio from 1986 to 2005, is what most people know about him. He was raised in New York City, where he was born, and the New York Knicks will always hold a special place in his heart. Canadian-American actor Michael Andrew Fox OC, better known by his stage name Michael J. Fox, was born on June 9, 1961. Even though he was born in Canada, renowned actor Michael J. Fox has a second home in Quogue, New York, where he spends his spare time supporting the New York Knicks. American actor, comedian, producer, director, and screenwriter Benjamin Edward Meara Stiller was born on November 30, 1965. Ben Stiller is a huge NBA fan who was up in New York City and has always supported the New York Knicks. He was born and raised there. Sean Love Combs, commonly known as Puff Daddy, P. Diddy, Diddy, or Puffy, is an American rapper, songwriter, record executive, and businessman. He was born Sean John Combs on November 4, 1969. Sean “P Diddy” Combs, who was born and raised in New York City, grew up rooting for the New York Knicks and continues to do so to this day. Uma Karuna Thurman, an American actress, producer, and fashion model, was born on April 29, 1970. She is prolific in a range of genre-spanning film and television projects, but “Dangerous Liaisons” marked her big break (1988). Uma Thurman, a renowned actor who was raised in Boston, Massachusetts, switched from being a Boston Celtics fan to a New York Knicks fan in a nearly sacrilegious move, but since doing so, she has never looked back. American actress and filmmaker Olivia Wilde was born on March 10, 1984. Although she was born in Michigan, she moved south to join her NBA team. Upton is frequently spotted watching games from courtside or dressed in the newest Knicks attire. American rapper, actor, and businessman Curtis James Jackson III, better known by his stage name 50 Cent, was born on July 6, 1975. He is renowned for his influence on the hip-hop scene and has been called a “master of the nuanced art of lyrical brevity.” Curtis “50 Cent” Jackson is a great NBA fan who was up in New York City. Like practically other New Yorkers, he will always support the Knicks. Jerome Allen Seinfeld is an American stand-up comedian, actor, writer, and producer who was born on April 29, 1954. In the comedy “Seinfeld,” which he co-created and co-wrote with Larry David, he played a fictitious version of himself. This is how most people know him. Jerry was raised a die-hard supporter of the New York Knicks and continues to do so now. Author, activist, model, and television broadcaster Padma Parvati Lakshmi was born in America on September 1, 1970. She likes basketball, and like most famous people who can afford it, she frequently goes to New York Knicks games in the city. Actress, producer, talk show host, and author Drew Blythe Barrymore was born in the United States on February 22, 1975. Although she was born in Culver City, California, Drew Barrymore frequently traveled to New York as a child due to her acting career. There, she developed a love for the New York Knicks and continues to occasionally attend games to this day.

Born on November 28, 1962, Jon Stewart is an American comedian, writer, producer, director, satirist, political commentator, actor, and television host. He is a New York Knicks fan because he displays his love for the team and the state on his sleeves.