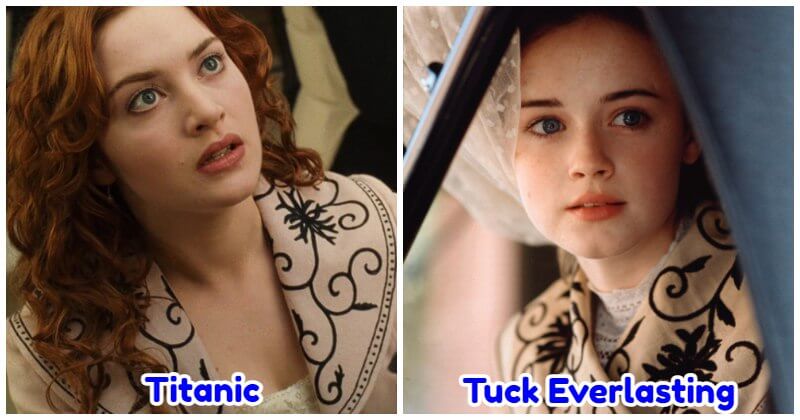 Have you ever noticed that some of the costumes in some movies are reused over and over again? You may be wondering if it’s just a coincidence or the producer’s intention. Here comes the explanation.

Hollywood studios often cooperate with fashion brands to produce sets, props, and costumes. When these outfits appear on screen more than once, it could be due to budget constraints, or commercial collaborations. They can also mix and match outfits that appeared in successful movies to avoid reinventing the wheel in future movie projects.

Today, we have compiled a list of 12 iconic movie costumes which have been reused so many times. Did you notice them? Let’s check them out! This necklace from Kiss Me Kate became a tiara for The Glass Slipper. However, it costs $4,000 for the conversion. It’s a good thing Rose survived the Titanic because her coat was able to be featured in Tuck Everlasting. After the Nottingham Sheriff rocked this beaded vest in Robin Hood: Prince of Thieves, it was reused in Braveheart. The dress with a built-in necklace was reused in From the Earth to the Moon, Mad Men, and The Spoils of Babylon. The pharaoh in Night at the Museum was cosplayed by “the fake pharaoh” in the “Natural History” episode of How I Met Your Mother. Could you realize the hat that appeared in The Musketeer was reused in Pirates of the Caribbean: The Curse of the Black Pearl? It wasn’t a coincidence. This dress appeared in Becoming Jane, Northanger Abbey, and Doctor Who (“The Haunting of Villa Diodati”). And it worked really well to turn the three films’ character images into one. Ignoring the hat, we can find out the dress was used in both The Duchess and The Scandalous Lady W. In the “Three Sundays” episode of Mad Men, Peggy reused a pink dress in The Help. Vikings reused some leather armor from Season of the Witch. It’s not too difficult to find them over and over again. The two movies are very different but one frilly dress. The iconic and unforgettable black dress from both Titanics.