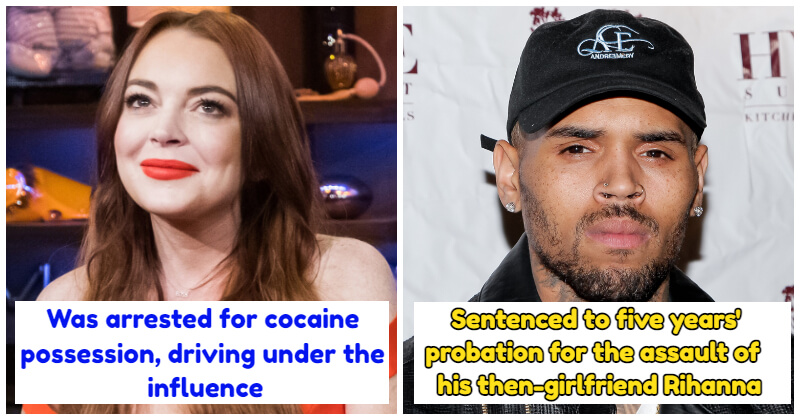 People make mistakes. But when those mistakes mean people breaking the laws, that constitutes a crime. And not many get away with that.

Celebrities are public people. Meaning that they are prone to breaking the laws too. Both misdemeanors and actual crimes. Even when their PR teams do everything in their power to convince us that these people are harmless.

Once in a while, we surprised ourselves by hearing about these celebrity lawbreakers on the news or reading about them in the tabloids. Both because they are famous people, and because of the seriousness of their crimes.

We would think that many celebrities can use money and fame as prerogatives to get out of legal troubles. Or at least to hire people to do so. But no matter how famous they are, nobody is above the law. So, which celebrities got caught breaking the laws? Find out who these 25 celebrity lawbreakers are, and how they get caught. Justin Bieber, aged 19, was arrested in 2014 on DUI and resisting arrest charges in the early days of his career. The singer has since cleaned up his behavior. In 2018, he married Hailey Baldwin, Alec Baldwin’s daughter. Entrepreneur and television personality Martha Stewart may not be the first celebrity to spring to mind when it comes to crime. Yet she was accused in 2004 of securities fraud, obstruction of justice, and conspiracy in connection with the ImClone stock trading case. Bill Cosby fans were horrified to find that the comedian had been accused of sexual assault, sexual violence, and sexual misconduct by up to 60 women dating back to the 1960s. He was convicted of aggravated indecent assault in 2018, but the verdict was overturned by the Pennsylvania Supreme Court in June 2021. Amanda Bynes, the former child actress, and The Amanda Show star was charged in 2013 with marijuana possession, reckless endangerment, and attempted tampering with evidence after throwing her bong out the window of her midtown New York City apartment. She was accused of driving under the influence the following year in Los Angeles. Professional boxer Mike Tyson was found guilty of raping 18-year-old beauty pageant candidate Desiree Washington in a high-profile trial in 1992. He was sentenced to ten years in prison, but the court postponed the final four years. At the age of 16, actor Mark Wahlberg went on a drug-fueled frenzy, badly wounding two individuals. He was charged with attempted murder, pled guilty to felony assault, and received a two-year prison term. He did, however, just serve 45 days. In June 2009, Chris Brown pled guilty to beating his then-girlfriend Rihanna. The attack happened following a disagreement concerning another lady. Brown was sentenced to five years on probation. He was imprisoned for seven months after breaching his probation. You may not be aware, but Khloe Kardashian was arrested for driving under the influence in 2007. The Keeping Up With the Kardashians star received a three-year probation term. Snoop Dogg’s felony offenses vary from simple drug possession to first-degree murder. He was arrested for cocaine possession when he was 19 years old. In 1993, he and his bodyguard were charged with first- and second-degree murder in connection with a drive-by shooting. They were, however, acquitted of those accusations in 1996. Charlie Sheen was arrested on Christmas Day 2009 in Aspen, Colorado, for abusing his then-wife Brooke Mueller. He was charged with felony threatening as well as a criminal misdemeanor. He was freed from jail the same day after paying an $8,500 bail. Long before she appeared on Stranger Things, Winona Ryder was a teenage actress in Hollywood, appearing in films such as Beetlejuice and Girl, Interrupted. Fans were startled when she was jailed in 2001 for stealing hundreds of dollars in items from Saks Fifth Avenue in Beverly Hills. Brian Hugh Warner, also known as Marilyn Manson, has been accused of sexual assault by several women, but it wasn’t until July 2021 that he was apprehended by California police after surrendering on an outstanding New Hampshire warrant for two counts of criminal assault. Felicity Huffman, star of Desperate Housewives, made headlines after pleading guilty to conspiracy to conduct mail fraud and honest services mail fraud. She admitted to paying up to $15,000 for a business that promised to raise her daughter’s SAT scores, increasing her chances of admission to a top university. Eminem, a Detroit rapper, was arrested in 2000 for concealing a firearm, a misdemeanor punishable by up to five years in jail. He was also charged with having a handgun in his possession. However, Eminem was only sentenced to one year of probation. Yes, Tim Allen, the star of The Santa Clause and Toy Story, has had run-ins with the authorities. Allen was arrested for drug trafficking in 1978 when police discovered more than a pound of cocaine in his luggage. He was imprisoned until 1981 when he was released and returned to the Los Angeles comedy scene. Sean Penn was prone to violent outbursts against the press throughout his marriage to Madonna. On one occasion, he assaulted a photographer on a movie set. In mid-1987, he was sentenced to 60 days in prison, but he only served 33 days. Kiefer Sutherland, star of 24: Live Another Day, was arrested on drunk driving charges in 2007 after failing a sobriety test. He was later freed on bail of USD 25,000. This was not the actor’s first arrest for driving under the influence; it was his fourth DUI offense since 1989. R.Kelly, a recording artist, was arrested in July 2019 on ten counts of severe criminal sexual assault. He was found guilty on all counts. The disgraced singer uses his celebrity to conduct a two-decade-long scheme to sexually abuse women and children. While former NFL running back O.J. Simpson was acquitted of the murder of his ex-wife Nicole Brown, he was arrested in 2007 after breaking into a hotel room and stealing sports memorabilia at gunpoint. He was sentenced to 33 years in prison after being charged with criminal conspiracy, armed robbery, kidnapping, assault, and use of a dangerous weapon. Natasha Lyonne spends time in the ringer before playing a prisoner on Orange Is the New Black. She was arrested for DUI in 2001. She was charged with mischief, trespassing, and disturbing a neighbor a few years later, in 2004. She spent the night in jail after skipping a court appearance. During a trip to Northern Ireland in 1987, Matthew Broderick and his then-girlfriend (and Ferris Bueller’s Day Off co-star) Jennifer Gray were murdered in a vehicle accident. He was charged with causing death by risky driving at first and faced up to five years in prison, but the charges were reduced to careless driving. Broderick was only fined $175. Sid Vicious, bassist and singer for the Sex Pistols, was jailed in 1978 for allegedly killing his lover Nancy Spungen in New York City. Vicious was subsequently released on bond after being arrested for beating Patti Smith’s brother Todd Smith in a nightclub.