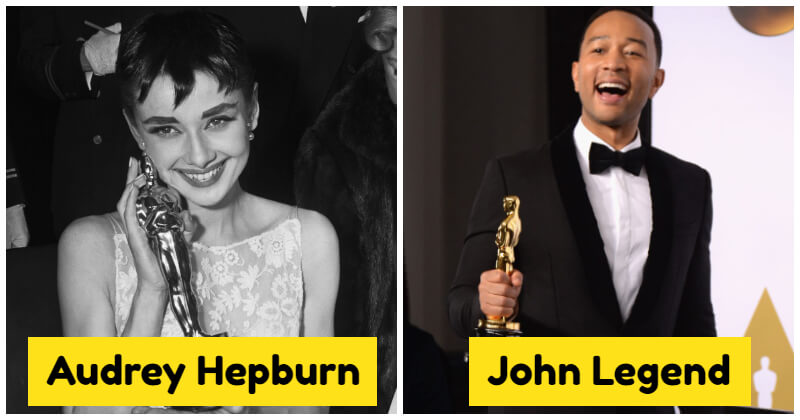 The EGOT is the acronym for the Emmy, Grammy, Oscar, and Tony Awards. Also known as the four biggest awards for thespians.

Miami Vice actor Philip Michael Thomas first came up with the word, which he first told the Associated Press in 1984, during the height of the NBC action show’s fame. And the term has been used ever since.

In fact, receiving any one of these four awards is a big honor for any actors, let alone all four. Yet, in history, there have been only 17 performers that are so talented they have achieved this feat.

In other words, these 17 performers have achieved the “grand slam” of showbiz!

These esteemed EGOT winners are recognized for their excellent work in television, recording, film, and theater. Can you name all 17 of them? If you cannot, then let’s find out who these ultra-talented actors are, shall we? Jennifer Hudson became the 17th EGOT winner and the second Black woman to do it when she won the Tony for A Strange Loop during the 2022 Awards. She previously received an Oscar nomination for Dreamgirls, an Emmy nomination for Baby Yaga, and two Grammy nominations for The Color Purple cast album as well as her self-titled debut. Meet the very first EGOT winner in history. Richard Rodgers started things off with a Best Song Oscar for State Fair, then went on to win six Tony Awards, two Grammys, and an Emmy for Winston Churchill: The Valiant Years. Oh, and he also got a Pulitzer Prize, which isn’t a huge thing. Helen Hayes, the first woman to earn an EGOT award, had a long and successful career. She earned an Oscar for The Sin of Madelon Claudet in 1932, an Emmy for an episode of Schlitz Playhouse of Stars more than two decades later, and a Grammy for Best Spoken Word Recording two decades after that. She also won not one, but two Tony Awards (along with another Oscar!). Helen’s other achievements, as if they weren’t impressive enough? Casually awarded the National Medal of Arts and the Presidential Medal of Freedom. John Legend has undoubtedly won a slew of Grammys, from Best New Artist to Best R&B Album (interesting fact: he has the most Grammys of any EGOT winner), but he pushed things to a whole new level when he won Best Original Song for “Glory” from Selma. On top of that, he won a Tony for Jitney and an Emmy for Jesus Christ Superstar Live in Concert, making him the second-youngest EGOT winner ever and the first Black man to do so. Mel Brooks has received several prizes over the years, including three Tonys for The Producers, multiple Grammys (including Best Spoken Comedy Album), and a slew of Emmys for his guest-starring performance in Mad About You, and an Oscar for Best Original Screenplay for The Producers. He’s! Been! Busy! Mike Nichols, the filmmaker, has won nine (9) Tony Awards. For what, you could ask? Death of a Salesman, Monty Python’s Spamalot, The Real Thing, Annie, The Prisoner of Second Avenue, Plaza Suite, Luv, The Odd Couple, and Barefoot in the Park are just a few examples. In addition, he received a Grammy for his comic performance in An Evening with Mike Nichols and Elaine May, a bevy of Emmys for Angels in America and Wit, and an Oscar for directing The Graduate, one of the finest films of all time. Remember when we were all like, “Wow, Mike Nichols has so many Tonys?” Scott Rudin, the controversial and troubled producer, is out here with 18 of them. Doubt, Fences, The Book of Mormon, and Death of a Salesman are among the films on the list, which are literally too long to get through. Meanwhile, he received a Grammy for the Book of Mormon record, as well as an Emmy for Outstanding Children’s Program in 1984 and the Best Picture Oscar for No Country for Old Men in 2007. Tim Rice has worked with Andrew Lloyd Weber for a long period, and they share several accomplishments. Tim also won an Oscar, a Tony Award, and a Grammy for Evita, as well as an Emmy for Jesus Christ Superstar Live in Concert. His other important achievements? Oscar wins for “A Whole New World” from Aladdin and “Can You Feel the Love Tonight” from The Lion King!! Marvin Hamlisch has literally won dozens of prizes. He may have “just” one Tony (for Best Musical Score for A Chorus Line), but he also has four Grammys (all won in 1974), four Emmys, and three Oscars (two for The Way We Were, and one for The Sting). Oh, plus he got the Pulitzer Prize, so he’s a PEGOT. Obviously, he’s on this list! Andrew Lloyd Weber won an Oscar, a Grammy, and a Tony for Evita alone, as well as an Emmy for Jesus Christ Superstar Live in Concert. (It’s worth noting that he also won Tony Awards for musicals like Sunset Boulevard, The Phantom of the Opera, and Cats.) Alan Menken received the Outstanding Original Song Emmy for “Waiting in the Wings” from Rapunzel’s Tangled Adventure in 2020, making him an EGOT winner. He’d already won eight Oscars for his work on Disney films such as Pocahontas, Aladdin, Beauty and the Beast, and The Little Mermaid, as well as a slew of Grammys for the same (and Tangled! ), as well as a Tony for Newsies. He’s basically responsible for some of your favorite childhood songs. Sir John Gielgud was the first member of the LGBTQ+ community to receive an EGOT, and he had a long career, winning all of his prizes between 1948 and 1991. John first won a Tony for The Importance of Being Earnest, and he won another in 1961 for Big Fish, Little Fish. He subsequently earned a Grammy in 1979 before going on to win an Oscar for Best Actor in a Supporting Role for Arthur in 1981 and a Best Actor Emmy for Summer’s Lease in 1991. It’s no surprise he was knighted! Whoopi Goldberg made history by being the first Black woman and the first individual to win two distinct Oscars in the same year. She earned an Oscar for Best Supporting Actress in Ghost and a Grammy for Best Comedy Album in addition to a Tony Award (for Thoroughly Modern Millie) and an Emmy Award (for Beyond Tara: The Extraordinary Life of Hattie McDaniel) in 2002. Oh, and she earned another Emmy in 2009 for her work on The View. Jonathan Tunick has one prize from each of the four categories. He won an Emmy for Music Direction for Night of 100 Stars, a Grammy for Best Instrumental Arrangement Accompanying Vocals for “No One is Alone,” an Oscar for Best Original Score for A Little Night Music, and a Tony for Best Orchestrations for Titanic (yes, there is a Titanic musical).