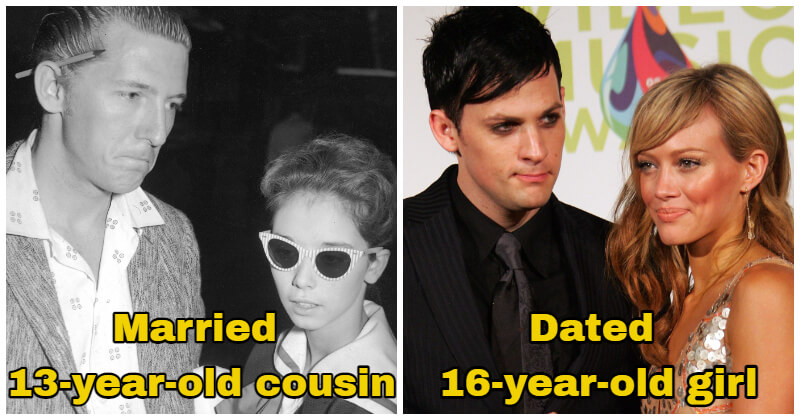 In Hollywood, it’s quite normal when celebrities have relationships with other celebrities. And, it sounds a bit strange when celebrities start dating people with massive age gaps. But it sometimes happens. In fact, things are far from our imaginations. I mean, have you ever heard about celebrities who dated people under the age of 18?

Some celebrities actually dated teenagers. Psychologists say that people tend to be attracted to something new and forbidden. Still, these celebrities mostly ended their love stories with people under 18 in a short time. And people wouldn’t be surprised when they announced their breakup.

Below are 19 celebrities who actually dated teenagers. Let’s scroll down and check them out! Joel Madden began dating Hilary Duff when he was 24, and she was just 16 years old. They quickly broke up after three years.

Stacy Ann Ferguson (aka “Fergie”) was 23 when dating 16-year-old Justin Timberlake. She said in a 2006 interview. “We went to Hawaii together, but we were never serious. He was ‘Mr. Right Now.'” Jerry Seinfeld first met Shoshanna Lonstein in Central Park in 1993, when he was 38 years old, and she was just 17. They called their relationship “friend” and broke up after 4 years. Wilmer Valderrama was 29 years old when he first met Demi Lovato at 17, but the two didn’t begin dating until Demi turned 18. Milo Ventimiglia was 29 years old when she started dating a beautiful 17-year-old girl, Hayden Panettiere. Milo decided to “Never do it again!” Linda Blair started dating and allegedly lost her virginity to Rick Springfield when she was only 15 and the musician was 25. That’s incredible! Luc Besson was 31 when he started dating 15-year-old Maïwenn Le Besco. They met when she was 12, and she gave birth when she was 16. Elvis Presley and Priscilla Beaulieu first met and quickly fell in love in Germany while he was 24 and she was 14.  However, they got married in 1967 when he was 32 and she was 21. Marvin Gaye was 34 when he met 17-year-old Janis Hunter in Los Angeles while recording in a studio. They also got married in 1977. Don Johnson was 22 when he began dating 14-year-old Melanie Griffith. They lived together when she was 15 Steven Tyler started dating Julia Holcomb in 1973 when she was 16 and he was 27. The girl moved to Boston to live with him after that. Bill Wyman started dating Mandy Smith when the girl was 14-year-old and the music was 47. They got married when she was 18. The rock star “groupie” Lori Mattix met David Bowie when she was just 14, and the two saw each other on and off for 10 years after that.

“He got into the tub, already filled with water, and asked me to wash him. Of course, I did. Then he escorted me into the bedroom, gently took off my clothes, and devirginized me.” Luc Besson was 31 when he began dating 15-year-old Maïwenn Le Besco. The girl gave birth when she was only 16. Chad Michael Murray was 24 when he began dating 17-year-old Kenzie Dalton. She portrayed a cheerleader extra on his hit show, One Tree Hill. Lori Maddox also met Led Zeppelin guitarist Jimmy Page when she was 15, and the two dated for about two years until the man cheated on Lori. Myra Gale Brown was 13 years old when she married rock and roll musician Jerry Lee Lewis, 22. The press figured out after Brown accidentally told a reporter that she was Lewis’s wife.

Reflect: Disney Introduces Its First Plus-Size Female Protagonist And We Can’t Wait To Watch It