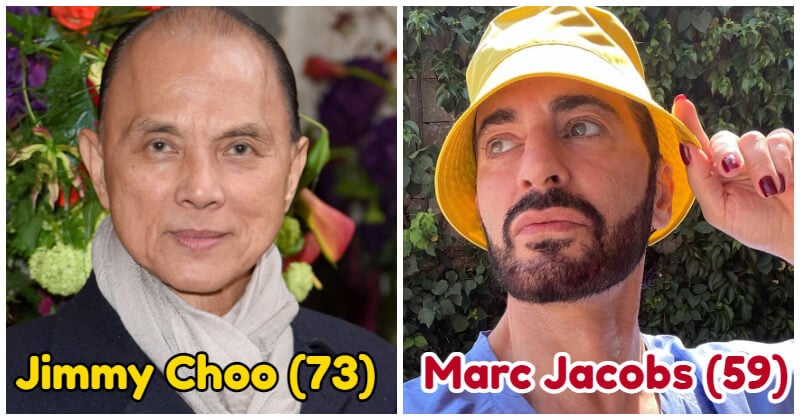 Whenever we see masterpieces on the runway or a standout collection from a famous brand, we cannot help but wonder who create these beautiful works. These people are the fashion designers who symbolize the fashion industry.

However, not all famous fashion designers are celebrities or want to publicize their daily images. Maybe few of us can exactly imagine what Calvin Klein or Tommy Hilfiger look like, even though we may know who they are and even wear clothing from their renowned label.

We’ve found some pictures of the people who hide behind the names of brands from luxury retailers. Honestly, they are not much different from regular people on the street. Can you recognize them immediately if you run into them somewhere? In his early years, Calvin worked in some New York City fashion companies. At the age of 26, he and his friend Barry K. Schwartz founded the “Calvin Klein Inc.” business in New York. Menswear was the company’s first focus, but later he added womenswear to his production line as well. Christian came to Paris at the age of 22, when he enrolled in the École du Louvre and the Sorbonne to study art history. But soon after, he developed a stronger passion for apparel design. He also founded his own haute couture firm by the time he was 24 years old. Christian designed women’s shoes as a freelancer for Chanel, Yves Saint Laurent, and Maud Frizon when he was young. Then, he decided to start his own business and open a store when he was 27. His iconic red heel quickly became one of the most famous fashion trends in the world, and he soon began making shoes for royalty and Hollywood stars. When he was 11 years old, Choo created his first pair of shoes. He moved to the UK to attend Cordwainers Technical College in London. Right after graduating, Choo began working at a design firm. Soon after, he established his own shoe store. At London Fashion Week, his abilities and creations were quickly recognized, and he became worldwide famous. After his father passed away, Luciano had to leave school and start working at a clothes shop.  He soon saved enough money to purchase a knitting machine and produced his first collection of vibrant sweaters that were successful. At the age of 30, Luciano founded the Benetton Group with his sister Giuliana, and two brothers, Carlo and Gilberto. At the age of 28, Manolo began his profession by writing a footwear-related column in Vogue magazine London. He decided to launch his own footwear label and open a store a year later. When  Blahnik was 32, he was the second guy in history who appeared on Vogue’s cover. On the Sex and the City series, his shoes were referred to as the fifth character. At the age of 23, Jacobs launched his first collection for the Marc Jacobs brand with the help of sponsors. He was known as the youngest fashion designer who receive a significant award from the Council of Fashion Designers of America at the age of 24. Kors began designing when he was a teenager and selling them from his parent’s home. He enrolled in the Fashion Institute of Technology in New York City when he was 17 years old, but he left after nine months and went to work in a fashion store. Four years later, he launched his own women’s clothing brand at the same shop. At age 29, the youngest Prada grandchild took over the family business of creating high-end items. She created and launched her first women’s collection when she was 40. 5 years later, she also launched a collection for men. Miuccia Prada was ranked among the most powerful women in 2014, according to Forbes. When Paco first entered the fashion industry, he created jewelry for Givenchy, Dior, and Balenciaga. Rabanne launched his first collection in Paris when he was 32. He used materials like paper, plastic, and metal and gain the international press’s notice.  He founded his own fashion company when he was 34 years old. Roberto decided to quit his studies and launch his own textile printing company, which gradually gained more reputation. He successfully debuted his first collection at the Paris Salon for Prêt-à-Porter when he was 32. Soon after that, he launched his name-brand fashion company and built his own fashion store in Saint-Tropez. Hilfiger opened his first clothes store at the age of 20, but he declared bankruptcy five years later. Then he moved to New York and worked for several brands. When he was 28, he started his own clothing design business, Tommy Hill.  With the support of sponsors, he founded the Tommy Hilfiger Corporation, which quickly rose to the top of the fashion industry. Yamamoto turned off his legal career to work with his mother in her sewing shop and develop his tailoring abilities. He then decided to enroll in a fashion institution to study design. In 1981, Yamamoto launched his collection in Paris, where it gained fame immediately.