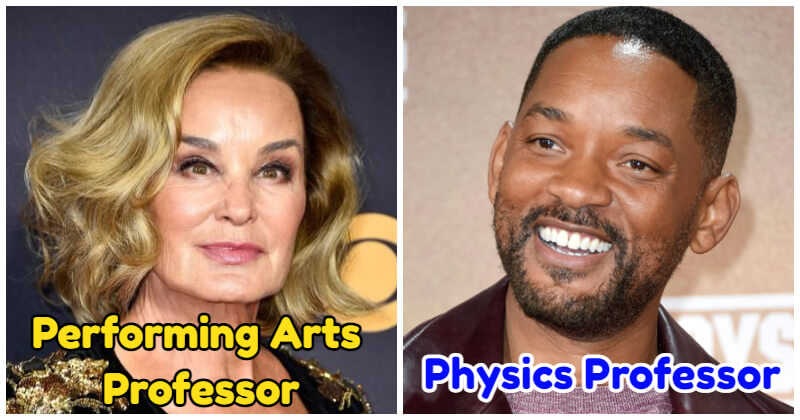 Whether it was your first day of school or your final week of college finals, everyone can relate to not being motivated to come to class. One thing that could completely change it? A fantastic teacher. And you know what else could make arriving at class a breeze? You wouldn’t want to miss a day if a famous person was trying to teach you something, would you?

We know it’s extremely rare to be taught by a big star. But let’s imagine that many of them bring their talents to the classroom to help students learn directly from actors, supermodels, and directors in the fields where they are hugely successful. Can you imagine being taught marketing by Kim Kardashian or learning environmental science from Leonardo DiCaprio?

We have made a visualization of these 19 celebs being college professors. Let’s scroll down and enjoy! Snoop Dogg has a great mastery of the English language as well as a talent for creative writing, which explains why many of his raps contain witty metaphors, similes, and idioms. Furthermore, only a true grammar enthusiast would be eager to continuously stretch their spelling abilities and word knowledge in their songs, as Snoop D-O-double G does. Snoop Dogg would almost certainly be an English professor if he went into education. Jessica Lange is a well-known American actress. She is the 13th actress to win two Academy Awards, three Primetime Emmy Awards, a Tony Award, a Screen Actors Guild Award, and five Golden Globe Awards. That’s why she should be a professor of performing arts in the multiverse. Leonardo DiCaprio is an environmentalist and an outspoken champion for climate change awareness. It would be a crime for DiCaprio to be anything other than an Environmental Science professor in another dimension. Amara La Negra is a proud Afro-Latina who raises awareness about ongoing issues in Latin culture. Amara La Negra would have made an excellent Latino studies professor if she had chosen education rather than entertainment. Jennifer Lopez is a proudly accomplished dancer who emphasizes her dance career over her career as a singer and actress. It is clear from her intense love of dancing that Jenny from the block would be a wonderful college professor of dance history. In his daily monologue on “The Daily Show with Trevor Noah”, Trevor Noah often expresses analytic political commentary about the state of the globe. His comic take on important socio-economic and political issues is typical of an engaging political science lecturer. Kendrick Lamar Duckworth is an American rapper, songwriter, and record producer. He is frequently considered one of his generation’s most influential rappers. Kendrick Lamar is unabashedly pro-Black; without a doubt, he’d be an African-American studies professor if he hadn’t made it as a rapper. Solange Knowles has a unique aesthetic that demonstrates her obvious interest in art. She is also very creative. In a different era and location, Solange would undoubtedly be required to teach art history. As a genuine humanitarian should, Angelina Jolie travels the world and generously gives back. In addition, Jolie has adopted a few children from different ethnic backgrounds, including her son Maddox from Cambodia and daughter Zahara from Ethiopia. Jolie has the aura of a professor of cultural and ethnic studies. Alicia Augello Cook, better known as Alicia Keys, is an American singer, songwriter, and actress. Alicia Keys would be a music professor in an alternate reality, most likely at NYU or Juilliard. Spielberg was born to direct movies. If Steven Spielberg weren’t a legendary film producer, he’d undoubtedly be a badass film professor who would be bringing up future generations of Spielbergs. Oprah Winfrey turned her talk show “The Oprah Winfrey Show” into a multibillion-dollar media empire that includes Oprah Magazine, the OWN network, and Harpo Production Studios. Oprah has a net worth of $2.6 billion as a result of all of this. Oprah clearly understands how to make and handle money; thus, if she were an economics professor, she would be unbeatable. Kim Kardashian is the queen of publicity and is an expert at promoting a brand. Kim Kardashian is a genius when it comes to spin and damage control. Kim K should have returned to school for a public relations and marketing degree because she already has access to the foundation, in my opinion, rather than earning a law degree. Nick Cannon has always had a way with words. Cannon has used his charisma and flair to host television shows such as “America’s Got Talent” and “The Masked Singer” over the years. Cannon also has his podcast, Cannon’s Class, as well as a radio show on Power 106 called Nick Cannon Mornings. All of Cannon’s on-air hosting positions signify to us that the 41-year-old Wild ‘N Out creator would have been a bomb a** mass comm slash journalism professor in a parallel world. American singer-songwriter, record producer, and actress Erica Abi Wright are better known by her stage name Erykah Badu. After viewing just one Erykah Badu interview, it will be obvious that Badu, if she had chosen to pursue a career in philosophy studies rather than music, would have inspired all of her pupils. In 2021, Will Smith confessed to the Republic World website that he is a physicist at heart. Smith’s ability to solve a Rubik’s cube in under a minute, passion for mathematics, and natural charisma would make him an ideal physics professor. Kerry Washington gives off the impression of an attorney even outside of “Scandal.” What if Kerry Washington played herself in Scandal, explaining why she was so brilliant in that role? What if Washington is truly Olivia Pope in a parallel universe? Isn’t that an incredible idea… Lady Gaga has long been a vocal advocate for the LGBTQIA+ community, releasing songs like “Born This Way” to encourage LGBTQ+ people. Lady Gaga has always promoted inclusivity, acceptance, and respect for one another’s differences. If Lady Gaga’s music career hadn’t exploded, she would undoubtedly have flourished as a gender and sexuality studies professor. Denzel Washington is an American actor known for his captivating and forceful performances. Watch or rewatch “Antwone Fisher.” After viewing Washington’s play therapist Dr. Jerome Davenport, you’ll agree that Washington would make an excellent psych professor in another reality.

10 Best On-screen Couples That Are The Ultimate Relationship Goals

What If We Live In The MCU Reality? Is Your Life Gonna Be Awesome?