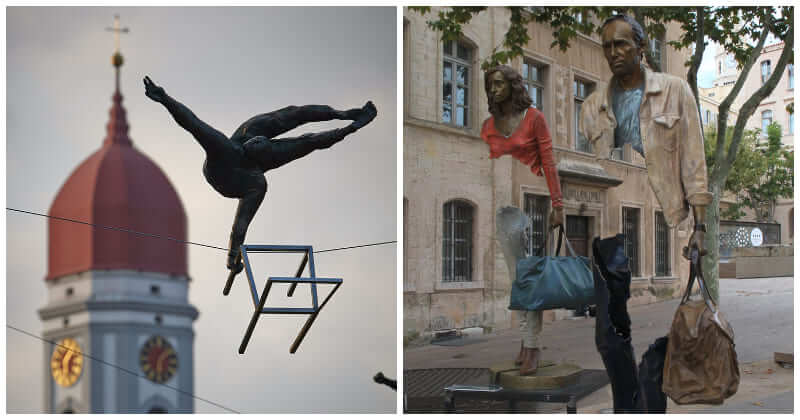 Legendary French painter and sculptor Edgar Degas (1834 – 1917) once stated, “Art is not what you see, but what you make others see”. Beyond what our eyes can perceive, there is art. Our prejudices and beliefs are both challenged and moved by it. Many impossible things have been made feasible through art. An illusionist must influence the brain’s propensities to form assumptions about its surroundings in order to successfully exploit the cues that people use to make sense of the environment.

In light of that, today’s post features an assortment of perplexing sculptures from across the globe that seem to defy science. These sculptures were made by great craftsmen and serve as examples of the creative potential of the intellect and the capacity of an artist to challenge conventional wisdom. View a selection of sculptures that defy gravity by scrolling down. You wouldn’t scroll down without pausing to look at each item in more detail, we bet. Both the Sir Michael Jones bronze in Eden Park and the Sir Colin Meads bronze in Te Kuiti were created by Natalie Stamilla. She is a contemporary artist in Auckland, New Zealand. The astonishing, singular creation of French artist Bruno Catalano, a collection of surrealistic bronze sculptures known as “Les Voyageurs” (“Travelers”), has been on display at the Marseilles harbor since 2013. The ten sculptures are life-size and show human laborers who are lacking crucial parts. The works’ tenuous support, which gives them a bizarre and ethereal aspect, is what makes them so striking. On Bruno Catalano’s official website, you may view further sculptures from the “Travelers” series.

#3. Leandro Erlich’s Window With Ladder – Too Late For Help #4. Lorenzo Quinn’s The Force Of Nature Lorenzo Quinn created a series of sculptures called The Force of Nature that show a lady using a piece of fabric to turn the earth on its axis. The woman, who is probably Mother Nature, is violently forced to throw her clothes and hair behind her by a gust of wind. Each piece emits a strong sensation of motion and does a stunning balancing act between the Earthly sphere and its voyager. #10. Elisabet Stienstra’s The Virgins Of Apeldoorn 24 Things Spotted At Wal-Mart That Are Beyond Messed Up

16 Mildly Infuriating Pics To Test Your Calmness And Patience Level

“What Is The Worst Parenting Trend To Date?”: People Give Perfect Examples Of Such Ridiculous Ideas

15 Funny Farewell Cakes That Employees Got From Their Coworkers

22 Of The Worst Design Fails That People Have Ever Spotted

By Revealing Two Sides Of The Same Story, Artist Speaks Out Problems Of A Decaying Society

20 Things That Are Considered Normal In Asian Countries, But Weird In Other Countries