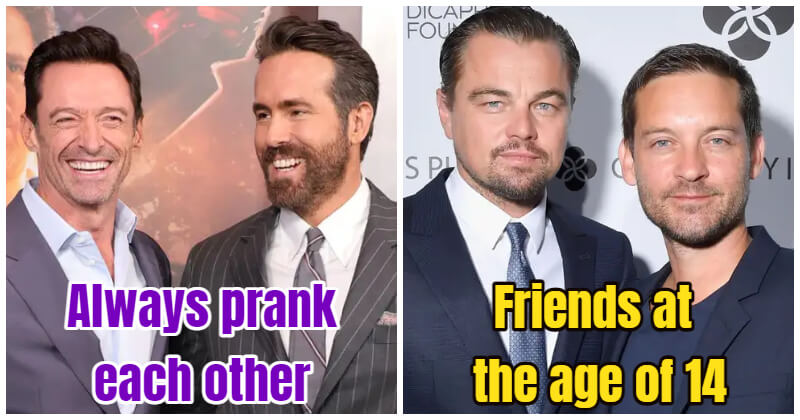 In Hollywood, some celebrities, who have worked together for such a long time, can’t get on well with each other. Some celebrities have spoken against others and are willing to ruin their closest friendships. We understand that it’s just a personality clash.

However, there are some celebrity friendships that stood the test of time and are growing much stronger. Friendship, like a fine wine, only gets better with time. Some celebs found long-lasting friendships before hitting the big time in Hollywood. Some have proven that no matter how famous they are, they still meet their best friends in the most simple way.

Below are some celebrities whose friendships have been tightened for decades. Scrolling down and enjoy! Kevin Hart and Dwayne Johnson love to troll each other because they are too close-knit.

“Since working with him I can honestly tell you that I’ve never had this type of brotherly chemistry with anyone that I’ve worked with and it’s a cool thing,” Johnson said in 2016.

Hart added, “There’s a substance, there’s life and there are values and that’s what I think we respect the most about each other where the friendship is going.” Matthew McConaughey and Woody Harrelson have been buddies for decades. “One of the things where [Woody] and I are good at [in] comedy is where I start and he ends and he starts and I end and we get on a similar frequency and roll with it,” said McConaughey in 2014. Ben Affleck and Matt Damon started their friendship when they were kids. They are now partners, Oscar-winning screenwriters, and, most importantly, still friends. “I’ve known him for 35 years, and we grew up together. We were both in love with the same thing: acting and filmmaking. I think we fed on each other’s obsession during really formative, important years and that bonded us for life,” said Damon in 2016. Keegan-Michael Key and Jordan Peele are considered the funniest duos of all time. They have worked together for 5 seasons in their Comedy Central series named “Key & Peele”. They also received a Peabody Award when collaborating. George Clooney and Brad Pitt frequently make jokes about each other. Pitt sometimes pranks Clooney and Clooney do the same. However, it all comes from their love. Oscar Isaac’s son called Pedro Pascal “Tío Pedro” (Uncle Pedro). “Oscar was very much the voice of, ‘Make sure it works out.’ He played a part in making me feel certain about what I was joining,” Pascal told Elle in 2019. Zach Braff and Donald Faison still be friends after “Scrubs,” and now they also host a podcast about the show. Faison said that Zach is actually his best friend. He also shared that being fond of each other is the only way they found their bromance. Dylan O’Brien and Tyler Posey started their buddyhood after portraying on-screen besties in “Teen Wolf.” “He is like my brother,” Posey said of O’Brien in 2015. “Dylan, he just sits and listens, and when there’s nothing to say, we just sit in silence and he’s just there for me. He’s a great guy. He’s family.”

Patrick Stewart and Ian McKellen’s friendship has been lasting for 22 years. In 2021, Stewart was surprised when McKellen performed a sonnet on Stewart’s 80th birthday. “A very happy birthday, dear Patrick. Lots of love, Ian,” he ended his sweet message. “The Voice” gains its success thanks to Blake Shelton and Adam Levine’s friendship. Shelton never thought that Adam wouldn’t appear on the show again because they have worked together for a very long time. And he can’t make jokes about Adam on the show anymore. “Breaking Bad” co-workers Bryan Cranston and Aaron Paul have their line of mezcal, Dos Hombres. “The moment I met Bryan, I instantly fell in love with the man,” Paul said at Cranston’s Hollywood Walk of Fame ceremony in 2013. Jason Momoa and Henry Cavill have taken their friendship to a next level. They became close friends when filming Aquaman and Superman. Eddie Murphy and Arsenio Hall worked together again after 33 years to star in the  2021 “Coming 2 America”. The two of them describe their relationship as brotherly. “You know how brothers are. You can fight, but nobody else better f— with Eddie,” Hall said in the 1988 Vanity Fair. Justin Timberlake and Jimmy Fallon always get the giggles around each other. In 2013, Timberlake penned the essay. “Jimmy’s lightning wit, mixed with a kindness you don’t normally find in comedy, is what makes you feel so comfortable having him in your home every night,” he wrote. John Mulaney and Nick Kroll have been friends when going to college. “I’ve known him for so long, and we love being around each other so this was such a pure joy,” Kroll said of working with Mulaney on “Oh, Hello” in a 2017 interview with Time. Mel Brooks and Carl Reiner had eaten out together for years until Reiner died in 2020. “I don’t think I’ve ever had a better friend than Carl,” claimed Brooks. Leonardo DiCaprio and Tobey Maguire have been friends since they were very young. “I jumped out of the car. ‘I was like, ‘Tobey! Tobey! Hey! Hey!’ And he was like, ‘Oh, yeah, I know you. You’re … that guy.’ But I just made him my pal. When I want someone to be my friend, I just make them my friend,” DiCaprio said of the beginning of their friendship in 2014. Rob Schneider, David Spade, Chris Rock, and Adam Sandler are regarded as the most famous groups of friends on SNL in the same season in 1990.  In 2010, they all came together once again to star in “Grown Ups”. Sebastian Stan and Anthony Mackie are so close in real life that Marvel gave them their show. During an appearance on “The Late Show,” Stan was asked by Stephen Colbert if the two hang out. “Well yeah,” Stan replied. “Because I’m sexy Sea Bass and he’s Mack Attack … that’s the name he gave me, by the way.” Stephen Colbert and Jon Stewart have compared themselves to Frodo and Sam from “Lord of the Rings.” Colbert said that he has learned a lot from his relationship with Stewart. Hugh Jackman and Ryan Reynolds often prank each other on Instagram. Jackman claimed that he felt lucky to have such an amazing friend as Ryan Reynold. “He’s insanely fun,” Hemsworth told GQ in 2020. “But don’t mistake that child-like, frantic energy for someone who isn’t prepared. That’s quite a unique combination, that he has the ability to, through humour, put you at ease, but is also armed with all the knowledge that a director needs to lead you through the process.” Channing Tatum and Jonah Hill have such strong chemistry. They made five movies together in five years. The two played best friends in “21” and “22 Jump Street”, of course, they are also best friends in real life. They both appeared in “the Lego Movie,” “This is the End,” and “Hail Caesar.”

People Are Convinced These 12 Masterpiece Movies Were Perfect

10 Celebrities Who Destroy Their Own Careers In Just One Night