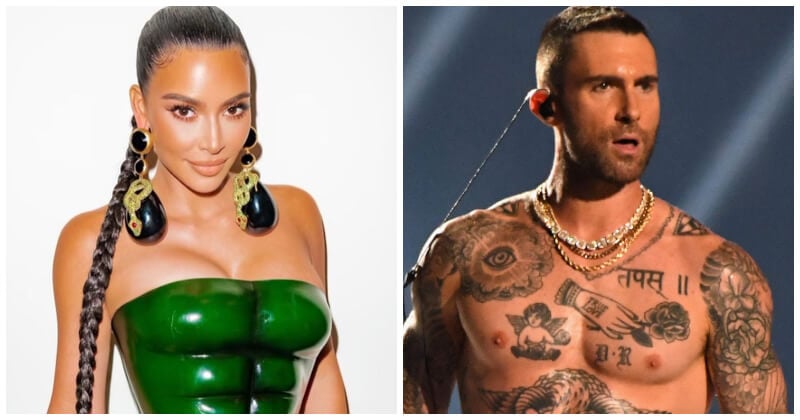 Is there any “hot” man and woman that you personally have no idea why they’re called that attractive? Kim Kardashian might be the first name that comes to some people’s minds. Although this model, media personality, and businesswoman owns sexy figures, people don’t think she is appealing. It’s just a subjective opinion but we can’t let go of our first impressions of someone.

Recently, Reddit user u/3nlightenedCentrist in r/AskReddit asked the community’s opinions on “Who’s a “hot” celebrity that you personally have just never found attractive?”. This question successfully got people into it, ending up with 24.8K comments. They don’t hold it back, so tons of unexpected names come in. Kim Kardashian, Blake Shelton, Russell Brand, and B.J. Novak – they are all listed. These names might frustrate or irritate some people, especially those celebs’ fans. Don’t be mad. These people are just speaking up about what they think or believe.

Are you curious which celebs are on this list? Scroll down and check them out! Blake Shelton is a chart-topping country music star and a TV personality. He rose to prominence with his debut single “Austin.” Blake has appeared as a judge on TV shows, such as ‘Nashville Star,’ ‘Clash of the Choirs,’ and ‘The Voice.’ B. J. Novak (or B. J. Manaly Novak) is a Jewish-American actor, writer, and director. He gained international recognition for his role as Ryan Howard from The Office. He also acted in Saving Mr. Banks, Knocked Up, Reign Over Me, The Internship, Inglorious Basterds, The Amazing Spider-Man 2, The Founder and The Smurfs duology. Chrissy Teigen started out as a model in 2010 by featuring in the annual ‘Sports Illustrated Swimsuit Issue.’. She is now known as a model, television personality, social media sensation, food blogger, and author. Chrissy has also appeared in popular magazines like ‘Cosmopolitan’ and ‘Ocean Drive,’ ‘Glamour,’ ‘Esquire,’ and ‘Vogue.’ Vin Diesel’s global fame is linked to action movies such as ‘The Chronicles of Riddick’ and ‘The Fast and the Furious’ franchise. Now, he is working as a director, producer, voice-over artist, and screenwriter. Kim Kardashian gained media attention with an infamous sex tape, just before the premiere of her reality show, “Keeping Up with the Kardashians,”. Now, she is ranked the most highly paid reality TV stars, with an estimated net worth of 40 million dollars.

Paris Hilton is the eldest child of real-estate developer Richard Hilton and socialite Kathy Richards Hilton. She gained the media’s attention after the release of a sex tape in 2003. She then starred in the reality TV series ‘The Simple Life,’ and earned a Teen Choice Award for her role in the film House of Wax. Her first book, Confessions of An Heiress, was landed on the New York Times best-seller list. John Legend is among the most successful singer-songwriters. She has won both Grammy and Academy Awards during his career so far. His debut album, 2004’s Get Lifted, earned him three Grammy Awards. People may know Jared Leto for his excellent portrayals in ‘Requiem for a Dream’ and ‘Dallas Buyers Club.’ Actually, he is also the co-founder and lead singer of the rock band 30 Seconds to Mars. Adam Levine is globally recognized as the Grammy Award-winning frontman of Maroon 5. The band’s pop hits ‘This Love’ and ‘Moves Like Jagger.’ conquered worldwide billboards for weeks. He also served as a longtime judge/coach on ‘The Voice.’ Kylie Jenner gained the media’s attention with her famous siblings in the reality series, Keeping Up With The Kardashians. She is now a businesswoman and social media icon. Ed Sheeran is among the most famous songwriter in the world now. He has sold millions of records and won Grammys for hits like “Thinking Out Loud” and “Shape of You,” as well as his 2018 album. Noah Centineo is best known for his roles in the series ‘The Fosters’ and the TV film ‘How to Build a Better Boy.’ Some of his most notable series are ‘Austin & Ally,’ ‘Shake It Up,’ ‘Newsreaders,’ and ‘The Fosters.’ Demi Lovato earned a great reputation in the movie industry as well as the music world at a really young age. She started out in a few ‘Disney’ productions. She then released albums like ‘Unbroken’, ‘Don’t Forget’, and ‘Here We Go Again’ that proved her prowess as a singer. Gwyneth Paltrow gained worldwide recognition for her roles in ‘Se7en,’ ‘Emma’ and ‘Great Expectations.’ Her portrayal in the 1999 movie ‘Shakespeare in Love’ earned her very first Academy Award. John Travolta hit his big time with his breakout roles in ‘Saturday Night Fever’ and ‘Grease.’ When his career nearly died, he revived it with his portrayal in ‘Pulp Fiction’. Since then, has starred in a wide range of additional projects. Taylor Lautner is best known for portraying Jacob Black in the ‘Twilight’ movie series. He was voted one of People magazine’s “100 Most Beautiful People” in 2009.

Russell Edward Brand is best known for his comic timing, impeccable wit while hosting radio and television shows. However, he is more famous for leading a wild lifestyle. He has often been featured on tabloids for his innumerable relationships, heroin and alcohol addiction, and objectionable behavior. Timothée Chalamet made a splash with his portrayals in films like ‘Lady Bird’ and ‘Call Me By Your Name.’ He also appeared in the popular films Interstellar (2014) and Lady Bird (2017), and starred as Henry V in The King (2019). Megan Fox rose to global star for her featured role in the ‘Transformers’ film series. She also appeared in films like Jennifer’s Body, Jonah Hex, This Is 40 and Teenage Mutant Ninja Turtles. A rapper, social media personality, and former reality star are what earn fame and fortune for Cardi B. Her commercial debut single, “Bodak Yellow,” surged to the top of the music charts in 2017.