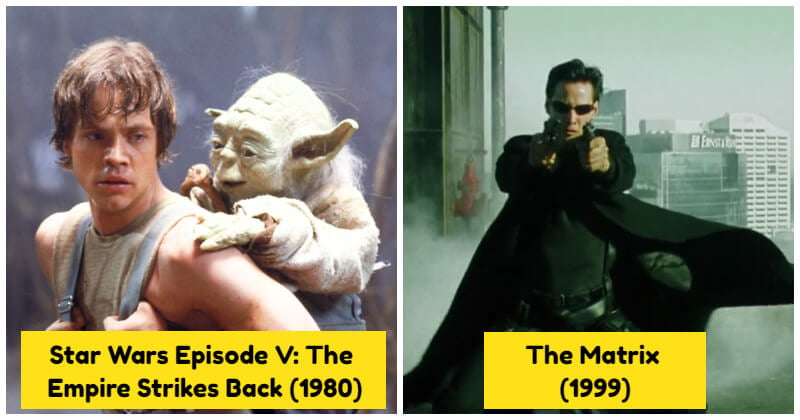 Our obsession with what the future could look like has made science fiction a backbone of cinema since the silent era. Since Georges Méliès’ A Trip to the Moon in 1902, writers and directors have tried to bring their fascinating hot takes on humanity’s ultimate fate on the big screen. Sci-fi has spawned a plethora of sub-genres, including B movies, horror, time travel, action blockbusters, arthouse, westerns, conspiracy thrillers, and even the occasional comedy.

The best science fiction films take a fantastic notion and turn it into a fully-realized parallel reality. There are few stories more fascinating than those that depict a future version of ourselves. It’s astonishing how many vintage sci-fi movies not only hold up, but feel more relevant than ever in this technology-obsessed society we live in now, with machine learning, robotics, and environmental disasters becoming reality right before our eyes.

In this post, we highlight the 20 best sci-fi films for your approval. From Star War to Predator, they will float your boat. In order to put down the revolt against the Galactic Empire, the Imperial Forces, led by ruthless Darth Vader (David Prowse), kidnap Princess Leia (Carrie Fisher). The Millennium Falcon’s captains, Luke Skywalker (Mark Hamill) and Han Solo (Harrison Ford), team up with R2-D2 (Kenny Baker) and C-3PO (Anthony Daniels) to save the lovely princess, aid the Rebel Alliance, and restore freedom and justice to the Galaxy. A cyborg assassin, known as a Terminator (Arnold Schwarzenegger) travels from 2029 to 1984 disguised as a human to assassinate Sarah Connor (Linda Hamilton). Kyle Reese (Michael Biehn) is dispatched to protect Sarah, and he reveals the impending arrival of Skynet, an artificial intelligence system that would precipitate a nuclear war. Sarah is being hunted down because Skynet knows her unborn child will be the one to lead the struggle against them. She and Kyle attempt to flee, despite the Terminator’s near-unstoppable pursuit.

Neo (Keanu Reeves) believes Morpheus (Laurence Fishburne), an enigmatic figure regarded as the most dangerous man alive, can provide an answer to his question: “What is the Matrix?” Trinity (Carrie-Anne Moss), a lovely stranger, contacts Neo and guides him into the underworld, where he meets Morpheus. They are pitted against a group of viciously brilliant secret agents in a deadly battle for their life. It’s a fact that has the potential to cost Neo more than his life. A deep space salvage team discovers Lt. Ripley’s (Sigourney Weaver) shuttle after it has been floating in space for 57 years. When the marines arrive to LV-426, they discover only one survivor, a nine-year-old girl called Newt (Carrie Henn). But the hundreds of aliens that have invaded the colony are no match for even these battle-hardened marines with the latest equipment. In the 23rd century, a New York City cabbie, Korben Dallas (Bruce Willis), finds the fate of the planet in his hands when Leeloo (Milla Jovovich) stumbles into his cab. Leeloo, as the embodiment of the fifth element, must work with the other four to prevent the Great Evil from destroying the planet. Dallas must race against time and the evil businessman Zorg (Gary Oldman) with the help of Father Vito Cornelius (Ian Holm) and hilarious broadcaster Ruby Rhod (Chris Tucker). This science-fiction classic about three astronauts stranded on a futuristic planet where apes rule and humans are slaves explores complex socioeconomic concerns. The group is taken aback when they realize that these highly intelligent simians can both walk and talk. They’ve even built a governmental structure and a class system. The astronauts find themselves caught and imprisoned by the apes as members of a devalued species. Dom Cobb (Leonardo DiCaprio) is a thief who has the extraordinary power to penetrate people’s dreams and take their secrets from their subconscious. His abilities have made him a sought-after commodity in the world of corporate espionage, but they have also lost him everything he cares about. Cobb is given a second chance when he is given the seemingly impossible task of planting an idea in someone’s mind. Cobb’s plan will be ideal if he succeeds, but a formidable adversary is watching his every step. A helicopter shooting at a sled dog disturbs a group of American research scientists at their base camp in rural Antarctica. When they first take the dog in, it attacks both humans and dogs in the camp, and they learn that the beast can take on the form of its victims. Before the savage beast picks them down one by one, a smart helicopter pilot (Kurt Russell) and the camp doctor (Richard Dysart) lead the camp workers in a desperate, gory battle against it. In the year 2084, Douglas Quaid (Arnold Schwarzenegger) is a bored construction worker who dreams of visiting colonized Mars. He goes to “Rekall,” a corporation that implants false memories in people’s heads, to feel the excitement of Mars without having to travel there. However, something goes awry during the process, and Quaid realizes that his entire existence has been a false memory implanted in his head, and the people who implanted it now want him dead. While Adm. James T. Kirk (William Shatner) and Capt. Spock (Leonard Nimoy) keep an eye on the Starfleet Academy students, another vessel from the United Federation of Planets is set to test the planet-creating Genesis Device in a supposedly empty area of space. Khan (Ricardo Montalban), an opponent Kirk thought he’d never see again, captures two of Kirk’s officers in the process. Kirk takes the helm of the Enterprise once more in an interstellar clash with Khan’s ship. The dawn of man, the space race, the arrival of artificial intelligence, further space exploration, and a journey into the cosmic unknown — Stanley Kubrick’s mammoth work of science fiction may not have much in the way of a clear linear plot, but it covers so much. It’s befuddling stuff, realized with Kubrick’s technical boldness, open to unlimited interpretation, and with just enough story to keep you watching. Halfway through their journey home, the crew of the commercial spacecraft Nostromo is woken from their cryo-sleep capsules to investigate a distress signal from an alien vessel in deep space. When the crew discovers a clutch of eggs within the alien ship, the panic begins. One of the crew members falls into a coma after an organism from within an egg bursts out and attaches itself to him. In this “Star Wars” sequel, the adventure continues. On the ice planet Hoth, Luke Skywalker (Mark Hamill), Han Solo (Harrison Ford), Princess Leia (Carrie Fisher), and Chewbacca (Peter Mayhew) are attacked by Imperial forces and AT-AT walkers. While Han and Leia flee on the Millennium Falcon, Luke searches for Yoda on Dagobah. When the dark side of the Force calls Luke into the ultimate fight with Darth Vader, Luke will only be able to survive with the Jedi master’s help (David Prowse).

Young John Connor (Edward Furlong), the key to civilization’s victory over a future robot rebellion, is the target of the shape-shifting T-1000 (Robert Patrick), a Terminator dispatched from the future to assassinate him in this sequel set eleven years after “The Terminator.” Another Terminator, the updated T-800 (Arnold Schwarzenegger), has been dispatched to safeguard the youngster. As John and his mother (Linda Hamilton) flee with the T-800, the youngster develops an unusual bond with the machine.

After stealing an orb wanted by Ronan, a powerful villain, brash space adventurer Peter Quill (Chris Pratt) becomes the target of persistent bounty hunters. To avoid Ronan, Quill is forced to form an uneasy alliance with four misfits: the gun-wielding Rocket Raccoon, the treelike humanoid Groot, the enigmatic Gamora, and the vengeance-driven Drax the Destroyer. Quill must gather his motley crew to defend the universe when he realizes the orb’s true power and the cosmic threat it poses. After losing their lucrative jobs at a New York City university, a group of scientists (Harold Ramis, Dan Aykroyd, and Bill Murray) decide to become “ghostbusters” to conduct a high-tech battle with the supernatural for money. They come across a portal to another dimension, a portal through which evil will be released onto the city. Now it’s up to the Ghostbusters to preserve New York from total catastrophe. Luke Skywalker (Mark Hamill) fights the evil Jabba the Hut and the cruel Darth Vader in order to save his Rebel Alliance friends and defeat the Galactic Empire. Han Solo (Harrison Ford) and Princess Leia (Carrie Fisher) renew their love for each other and join forces with Chewbacca, Lando Calrissian (Billy Dee Williams), the Ewoks, and the androids C-3PO and R2-D2 to help disrupt the Dark Side and defeat the terrible emperor. Deckard (Harrison Ford) is compelled to return to his previous job as Replicant Hunter by the police boss (M. Emmet Walsh). His mission was to find and kill four escaped Replicants who had returned to Earth from the colonies. Deckard visits the Tyrell Corporation before commencing the job, where he meets Rachel (Sean Young), a Replicant female with whom he falls in love. The US government hires Dutch (Arnold Schwarzenegger), a lucky soldier, to surreptitiously rescue a group of politicians stranded in Guatemala. But something is very awry when Dutch and his crew, which includes weapons specialist Blain (Jesse Ventura) and CIA spy George (Carl Weathers), arrive in Central America. The group realizes they are being pursued by a cruel creature with superhuman strength and the ability to blend into its environment after discovering a trail of dead bodies.