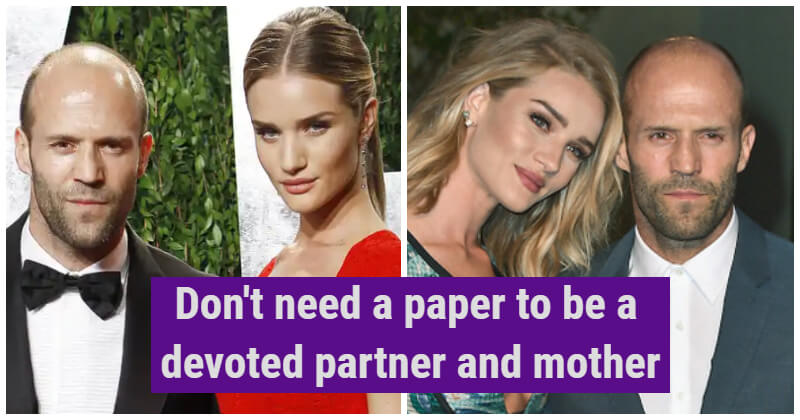 In Hollywood, celebrities’ love is easy to come and easy to go. Despite the support of their fans, some celebrity relationships end in a nasty breakup.

However, some celebrity relationships have been lasting for decades even when they decided to not get married. These celebrities, who have spoken out against marriage, prove how serious they are about their decisions. And who are the famous celebrity couples who never tie the knot? Certainly, Kurt Russell and Goldie Hawn are on top of the list. They have been together for 30 years but say no to marriage. But they are not the only couple who made that choice. Ricky Gervais and Jane Fallon’s relationship has lasted for over three decades, but they have no plan to get married.

Below are 10 famous couples who have spent decades together but haven’t planned to walk down the aisle together-. Let’s check them out, and let us know your favorite pair. Their love story started when the model Rosie Huntington-Whiteley and action star Jason Statham met at a London party in 2009. They officially went on dating two years later. It’s been more than a decade together, but the duo never walks down the aisle. She revealed, “For any couple that’s been together for a certain amount of time, there’s a massive amount of pressure to get married. I believe in marriage, but being in a happy relationship is much more important to me.’’ Rose Byrne and Bobby Cannavale began dating in 2012 after working together for seven years. Although they decided not to tie the knot, they use the terms husband and wife in their daily lives,  ’’I hate all the other words!’’ He then added, “Boyfriend and girlfriend feel so young. The partner feels so sterile. What else could we say?” Eva Mendes and Ryan Gosling have been together since 2001 after meeting on the set of their movie, The Place Beyond the Pines. They have two daughters: Esmeralda, 7, and Amada, 5. Eva once said,  ’’I love the idea of a union, that’s very beautiful. I just don’t think it should be a piece of paper because society tells me to.’’

Eva also said she is willing “to be with someone in their fifties or sixties and be like, ’That’s my boyfriend.’’’ She claimed that she doesn’t like the terms “husband’’ and ’’wife’’. Ricky Gervais and Jane Fallon first met when they were students at the University College in London in the ‘80s. They have stayed together since 1984 and never plan to tie the knot.

“We’re not married because neither of [us] is fussed.” She added that marriage “has not been anything that either of us has ever really needed.”, Fallon said. The couple has been staying together since 1983.  “For people like us, the marriage certificate wasn’t going to create anything that otherwise we wouldn’t have,” Russell said in 2020. Hawn had also claimed, “It’s not about the marriage. It’s about the people and the relationship, and the will to stay together.” In August 2014, Kris Jenner met Corey Gamble at a birthday party for fashion designer Riccardo Tisci’s 40th. They were said to have engaged in August 2018 by a massive ring. She has no plan to walk down an aisle, “I don’t need to put on a long, white dress and walk down an aisle. I’ve done that.’’.

“’ I just feel grateful and blessed for my past experiences, and I’m looking forward to my future, and I just don’t think that I want to go there.”, she added. Sandra Bullock started dating her now-husband Bryan Randall in 2015. Bullock, who adopted son Louis in 2010 and daughter Laila in 2015, has embraced her relationship with Randall over the years, but they don’t rush to tie the knot.

’’I don’t want to say do it as I do it, but I don’t need a paper to be a devoted partner and devoted mother.”, she revealed. Oprah Winfrey and Stedman Graham have been partners since 1986. They never think of any plan to have kids. She also revealed,  ’’Both he and I now say, ’If we had married, we would not be together.’’’ She continued, ’’We would not stay married because of what that would have meant to him, and I would have had my ideas about it.” Maya Rudolph and Paul Thomas Anderson have been together since 2001. They share four children but never get married. The actress said she had stopped calling Anderson “boyfriend” after having kids. She used the term husband instead. ’’It means he’s the father of my child, and I live with him, and we are a couple, and we are not going anywhere.”, she explained. Shakira started dating soccer star Gerard Pique after Fifa World Cup in 2010. The singer revealed that she had met the most attractive man in the world. Sadly, they just split up a month ago.

15 Before-Now Photos Of The “Sexiest Men Alive” So Far

15 Mind-Blowing Facts You Didn’t Know About The Simpsons