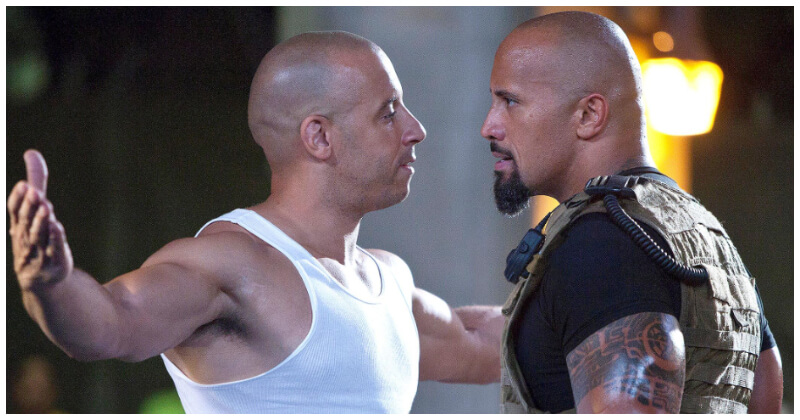 It’s unavoidable when two individuals have a personality clash. And we sometimes have to deal with classmates or co-workers that we can’t stand. Celebrities are no exception. In such a complicated world like Hollywood, it’s easy to find celebrities who have been outspoken about other celebs they don’t like.

Amazingly, some celebs took their rivalry to the next level and refused to work together. It would be a nightmare when you have to work with the one you hate. Filmmakers need to keep that in mind when choosing actors for movie roles. Because having two nemeses in a movie is one of the most terrible ideas in the world. It might ruin everything.

Below are 10 actors who directly refuse to work with each other. Let’s check them out! It’s remained an argument about Dwayne Johnson and Vin Diesel. Johnson has publicly claimed that the two actors will not work together anymore. In an interview with The Rolling Stone, he explained that this is due to “different approaches to filmmaking.” After their Annapolis movie ended, Gibson apparently won’t be working with Franco anymore. Because Franco was “cruel” and “threw real punches” at Gibson while filming their boxing scenes. Nick Nolte and Julia Roberts worked together on 1994 I Love Trouble. The two hated each other while making movies. When being asked her opinion on Nolte in an interview with The New York Times, Roberts described Nolte as “charming and nice,” but he was also “completely disgusting.” Nolte frankly responded, “It’s not nice to call someone ‘disgusting.’ But she’s not a nice person. Everyone knows that.” While working together in Orphans, LaBeouf attacked Baldwin because Baldwin didn’t remember the script. After that, Baldwin wanted to quit the movie project. But producers chose to fire LaBeouf. Kevin Smith And Bruce Willis first worked together on Live Free or Die Hard, which led to them working together on Cop Out. But this time, everything went wrong. Smith criticized Willis’ attitude and later called him “the unhappiest, most bitter, and meanest emo-bitch I’ve ever met at any job I’ve held down.”

However, Smith has apologized for his comments after Willis announced that he was “stepping away” from acting after being diagnosed with aphasia. According to rumor,  Bill Murray criticized Lucy Liu’s performance while working together on the 2000s version of Charlie’s Angels. They were said to get into a fight and had to be separated by the crew. Finally, in the sequel Charlie’s Angels: Full Throttle, Murray was replaced by Bernie Mac, supporting the rumor. “He [Crowe] picked a fight with me. He started it for no reason at all. He said, ‘George Clooney, Harrison Ford, and Robert De Niro are sellouts,” Clooney revealed in an interview with Esquire magazine in 2013. Since that, the duo has not worked together on any film project. Lena Headey and Jerome Flynn used to date back in 2002, and their love story ended in anger. That is why the actors didn’t play Cersei and Bronn in the HBO drama Game of Thrones. After their movie Blade: Trinity, Ryan Reynolds claimed he would never work with Wesley Snipes again. According to the staff, Snipes was constantly chilling out when Reynolds was snowed under during the shooting process Sylvester Stallone and Richard Gere are said to get into a fist fight while filming The Lords of Flatbush. While the reason behind their rivalry is still unclear, the duo never works together anymore.