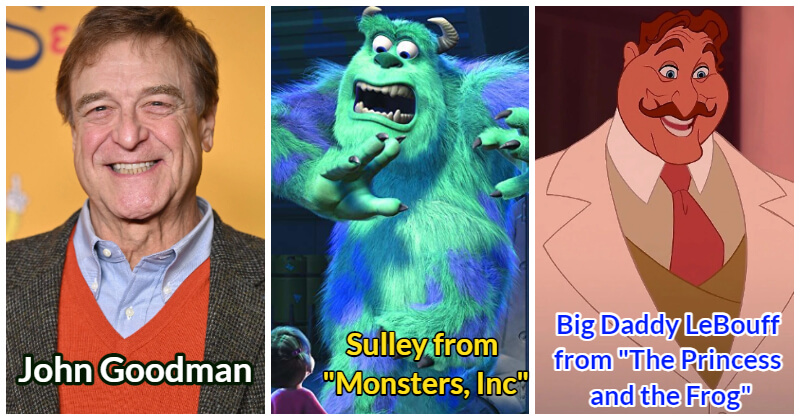 When it comes to the magical realm of Disney and Pixar characters, there are normally two things that bring them to life: the animators’ animation and artistry, and the performance of the voice actors, who give them soul. Many celebrities consider it an honor to play one of the iconic Disney/Pixar characters, and they return to other projects to lend their voices to these classic films.

You’d be shocked how many big stars have appeared in multiple Disney or Pixar films. Some voices are so well-known that you can instantly tell who they were spoken for. Some voices are more mysterious, making you feel as if you’ve heard them before, but you’re not quite sure where. They bring the characters to life on the screen with their pitch, tone, pronunciation, and enunciation.

Lucky for you, we’ve tracked down a list of actors who have voiced multiple characters for Disney and Pixar films. Let’s scroll down and enjoy!

John Ratzenberger is an American actor who is best known for his role in the popular TV sitcom, “Cheers”. John is also a famous voice actor who appeared in every one of Pixar’s first 22 animated films, until “Soul,” the 23rd and first without his voice. He is best known for his roles as Hamm in “Toy Story,” P.T. Flea in “A Bug’s Life,” and “The Abominable Snowman” in Monsters, Inc.

Julia has worked with Disney Pixar for several years; she initially appeared as Princess Atta in “A Bug’s Life,” one of the most underappreciated Disney Princesses ever. Julia then played Rochelle in “Planes” and, most recently, Laurel Lightfoot in “Onward.”

Emma Thompson is a British Academy Award-winning actress and screenwriter best known for her roles in “Sense and Sensibility” and “In the Name of the Father.” She is also an actress who has been in several Disney films. The first was the underappreciated “Treasure Planet,” in which she co-starred with Joseph Gordon-Levitt as Captain Amelia. She then rose from Captain to Queen when she gave Queen Elinor’s voice in “Brave”!

Jenifer Jeanette Lewis is an actress, singer, comedian, and activist from the United States. Jenifer has been chosen to voice characters in two animated Disney films because she has experience doing it from her time on “The Proud Family.” In the “Cars” movies, she plays Flo, a car, and in “The Princess and the Frog,” she plays Mama Odie!

Kristen Anne Bell is an American singer and actor. She is a famous figure in Disney folklore, potentially arising from her role as Anna in “Frozen.” She’s since appeared in “Zootopia,” “Ralph Breaks the Internet,” and, of course, “Frozen 2.”

John has one of the best voices in the business, which he used to portray one of the most iconic Disney characters of all time, Sulley from “Monsters, Inc”. John’s distinct voice was also used for Pacha in “The Emperor’s New Groove” as well as Big Daddy LeBouff in “The Princess and the Frog”.

Bonnie Lynn Hunt is an American actor, comedian, director, producer, writer, and television host. You might be surprised to discover that Bonnie is another legend when it comes to voicing Disney Pixar characters. In terms of the amount of Disney characters she has played, she is second only to John Ratzenberger. Rosie the spider from “A Bug’s Life,” Mrs. Flint in “Monsters, Inc.,” Karen Graves in “Monsters University,” Sally Carrera in the “Cars” movies, and Dolly in “Toy Story 3 and 4” are among her roles.

Jodi Marie Benson is an American actress and singer. She is well recognized for her role as Ariel in Disney’s 1989 animated blockbuster “The Little Mermaid,” as well as in other films. Jodie has also played Barbie in “Toy Story” 2 and 3, and she reprised her role as Ariel in “Ralph Breaks the Internet.”

Octavia Lenora Spencer is an American actress, author, and producer. In 2016, she was given the honor of lending her voice to a Disney character when she was cast as Mrs. Otterton in “Zootopia.” Then, in 2020, she brilliantly portrayed the Manticore in “Onward.”

Rachel Jessica Te Ao Marama House is an actor, acting coach, and director from New Zealand. She joined the Disney family more recently as well, but it hasn’t stopped her from increasing the number of appearances she makes already! In “Moana,” she first appeared as Gramma Tala, Moana’s free-spirited grandmother. Then, in 2020, Rachel appears in “Soul” as Terry, the soul-counter determined to reach their quota.

Alan Wray Tudyk is a well-known American actor. He is unquestionably a Disney hero. He’s had his key roles, most notably as King Candy/Turbo in “Wreck-it Ralph,” but he’s also acted in several other Disney films. Alan voiced the Duke of Weselton in “Frozen,” as well as Alistair Krei in “Big Hero 6.”

Wallace Michael Shawn is an actor, comedian, dramatist, and essayist. Wallace has one of the most recognizable voices in the world, especially among Disney fans! His portrayal as Rex in the “Toy Story” films is legendary, but he also portrayed Gilbert Huph, Mr. Incredible’s boss, whom he throws through a series of walls in the first film.

Akuna, Idrissa “Idris” Elba is an English actor, musician, and producer. He is one of the Disney family’s more recent additions. In “Zootopia,” Idris played police chief Bogo, and in “Finding Dory,” he played Fluke the seal. He also played Shere Khan in the live-action remake of “The Jungle Book.”

Professionally, Vera Mindy Chokalingam is referred to as Mindy Kaling. She is an American actress, comedian, writer, producer, and director. Mindy entered the Disney world with her coworker Phyllis Smith. She voiced the character Disgust in “Inside Out,” and then Taffyta Muttonfudge, Vanellope von Schweetz’s rival in “Wreck-It Ralph.” Richard Bruce Kind is an American actor and comedian. Richard has been in several Disney films since his debut as the slightly dim grasshopper Molt in “A Bug’s Life.” Since then, he’s voiced Bookworm in “Toy Story 3,” appeared as a van in both “Cars” films, and provided the dulcet tones for Bing Bong in “Inside Out.”

Now for a true Disney classic! Bradley Henry Gerstenfeld, better known as Brad Garrett, is an American actor and stand-up comedian. He has a distinct deep voice and has starred in a variety of television and film roles in both live-action and animation genres. Brad has appeared in numerous Disney films, including “Finding Nemo,” “Ratatouille,” “Tangled,” and “A Bug’s Life.” He is, however, one of those dedicated Disney voice actors who has never received much attention.

Maya Khabira Rudolph is an American actress, comedian, and singer. Maya’s first Disney-voiced gig was as Aunt Cass in “Big Hero 6” in 2014. Fortunately, she returned to the Disney machine in 2021 as Daniela Paguro in “Luca.” Sandra Miju Oh is a Canadian-American actress. Sandra Oh finished her third Disney role as Ming Lee in “Turning Red” earlier this year. She debuted as Ting Ting in “Mulan II” in 2004, and she also portrayed Virana, the Fang leader, in “Raya and the Last Dragon.”