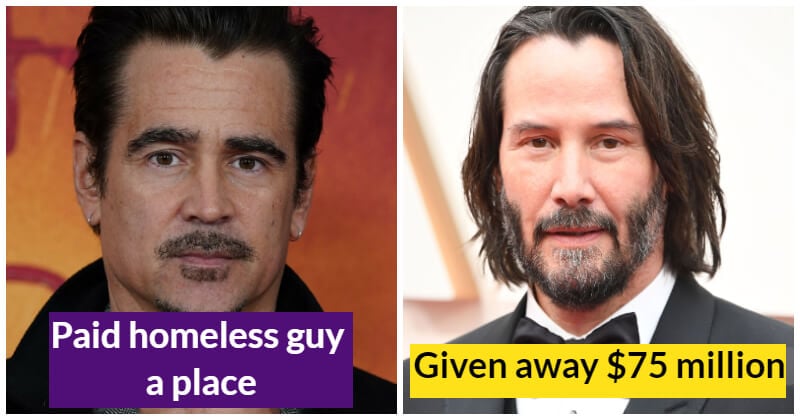 Some actors portray the most warm-hearted characters in their movies. But they might be rude and mean in real life. In other words, these actors truly lower people’s expectations by having an inappropriate manner toward others. It’s such a disappointment or even a nightmare for their fans who find out the truth. There are many incidents that fans have faced that awful experience.

However, some actors play wicked characters on screen and you will certainly change your mind when seeing them in person. They might be the nicest and kindest people in the world. From Tom Cruise to Keanu Reeves, they are so generous and kind-hearted beyond our expectations.

Today, we have compiled a list of the 8 kindest actors and their untold stories. Let’s check them out! One rainy night, Tome Cruise drove along Wilshire Boulevard and witnessed a woman get hit by a car. It was Heloisa Vinhas, a 23-year-old Brazilian-born aspiring actress. The driver of the car ran away and Cruise asked someone to call for an ambulance. He even followed the injured woman to a medical center to make sure everything gonna be ok. After discovering she had no insurance, the legendary acter paid her $7,000 emergency room bill. Keanu Reeves earned $75 million from The Matrix and gave away all of them to the special effects and costume design crews who help Reeves create an awesome character Neo. Not many people know how generous and respectful he has been to his other colleagues. For example, Reeves decided to cut his salary so that the film’s budget could afford the Al Pacino in The Devil’s Advocate. He did the same thing for Gene Hackman in The Replacements and never mentions it. Before Zach Galifianakis made it big in Hollywood, he lived in a small apartment that couldn’t even fit a washing machine. For that reason, he was a loyal customer of a local laundromat. Then, he met Elizabeth Haist, known as Mimi, who worked there for more than 2 decades. They soon became close friends

After his success in The Hangovers, Galifianakis moved to a better place to live and stopped visiting the laundromat. However, he never forgot his friend Mimi.

Once he found out that his 87-year-old friend lost her job and had become homeless, he bought her an apartment and paid for all of the bills. And he also invited and walked with her on the red carpet. “Mimi helps me feel better [during those events],” says Galifianakis. Steve Buscemi used to be a New York firefighter before starting his acting career. And on September 11, 2001, he got back to his old job and worked 12-hour shifts for several days. His duty was to search for survivors in the rubble of the World Trade Center. “It was a privilege to be able to do it,” said the actor. Buscemi worked and connected with the firehouse where he used to work and with some co-workers who he worked alongside. He is always willing to serve his country and be helpful at an anytime. After Christopher Reeve was paralyzed, sustaining a spinal injury when he took horseback riding in 1995, he joined forces named American Paralysis Association (APA). It is devoted to “curing spinal cord injuries by funding innovative research and improving the quality of life for people living with paralysis through grants, information, and advocacy.” Later, the APA was renamed The Christopher and Dana Reeve Foundation to honor the film star and his devoted wife. Reeve continued to make many television appearances to help raise funds for the cause until the very last days of his life. In 2007 at the Toronto International Music Festival, Colin Farrell faced a homeless man who was sitting on the curb of a local restaurant. Farell didn’t ignore him like everybody else, he sat down next to him and chatted with him. Farrell promised to help the miserable man to rent an apartment for a year and would gradually check up on him by text. The man’s life changed from that moment. “He’s a down-to-earth guy,” he said. “He’s willing to help you out. If you show respect, it goes a long way.” After that, he wasn’t homeless, and that’s a blessing. The father of Jessica Cole who died of brain cancer in 2004 explained how Robin Williams chartered a private plane to visit his dying daughter in North Carolina. Williams was her hero. Her wish definitely came true. The meeting was arranged with the Make-A-Wish Foundation. Williams took hours to cheer her up and acted like he had known her before. Buffy actor Anthony Stewart Head and his wife once decided to visit a young trans fan and come to his home. They took a day with him and went to the luxurious restaurant, introduced him to their horses, took lovely pictures printed and signed, and even gave him tips on an essay he was writing on Shakespeare for school. “Most importantly, however, they gave me what I had been lacking in my life up until that point- affirmation, compassion, and belief in my abilities,” said in excitement the boy.