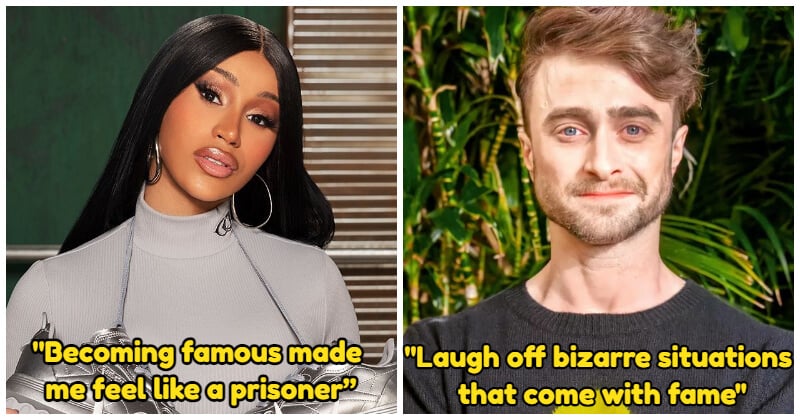 Fame is defined as the state of being known or talked about by many people, especially on account of notable achievements. Everyone has dreamed of being famous at least once in their lives. While some want to possess incredible talent, some wish to lead a luxurious life. They can attend the prestigious, give autographs, and be adored. Despite their perceptions of fame, the reality is far from what it truly is.

Fame comes with many struggles. These include the lack of privacy, paparazzi, rumors, stalkers, and the constant pressure of being in the public eye. Some famous people are forced to keep their smiles and even say hello and wave goodbye to everyone. Sometimes these make them frustrated.

Here are 11 celebrities who opened up about the hidden side of fame and revealed the pitfalls of becoming a star. The Youtuber Marco Sander posted a video, in which Cameron Diaz claimed that becoming famous doesn’t equal happiness. She felt surprised when someone wanted to be famous like her. For Diaz, true happiness lies in staying true to yourself. In a new Instagram post, Justin Bieber has opened up about the personal challenges he’s endured when dealing with fame at a young age. Although he owns a huge fortune, he found himself “with no skills in the real world. For him, this is a very scary concept for anyone. That led to some dark times: “I started doing pretty heavy drugs at 19 and abused all my relationships. I became resentful, disrespectful to women, and angry”. Jennifer Lawrence revealed that she is hardly on her best behavior around fans in order to avoid uncomfortable encounters. The Oscar winner admitted to Adam Sandler while chatting during Variety Studio’s Actors on Actors series that she is purposely mean to fans as a defense mechanism. Leonardo DiCaprio is one of the most recognizable faces in the entertainment industry. However, even after more than 20 years in the spotlight, DiCaprio still hasn’t fully adjusted to the attention that comes with being famous. He admitted that despite all of the wealth and accolades, being a public figure has never been a comfortable experience for him. In an interview, DiCaprio talked about the challenges of being famous and compared it to being in a videogame. Megan Fox is known for starring in movies such as Jennifer’s Body, Transformers, and Teenage Mutant Ninja Turtles. She has enjoyed some success over the years as an actor. Although Fox seems to have it all, she was so overwhelmed by her experience with fame. She called it a psychological breakdown. She didn’t want to take a photo, do a magazine, walk a carpet, or even be seen in public because of her fear. Brad Pitt quickly became Hollywood’s most in-demand heartthrob after “1991’s Thelma & Louise”. However, the fast rise took a toll on the actor. In an interview, Pitt opened up about his early days of fame when each of his moves was endlessly talked about and scrutinized. Lady Gaga has spoken about her disillusion with the music industry and how she almost quit music. When being famous, she spent days just shaking people’s hands, smiling, and taking selfies. She really felt sad when she was overworked and become a moneymaking machine. Matt Damon has been in the public eye ever since the success of the 1997 film “Good Will Hunting”. The critically acclaimed film went on to earn him the Academy Award for Best Original Screenplay, but it also cast him into the celebrity lifestyle. He shared that when you become a star, everyone treated you differently. He’d always heard people say: ‘Well, you can’t prepare for it, it just is something that you have to kind of deal with. And everybody deals with it with whatever tools they have, whatever their foundation is, and I was very lucky to have the family that I had.” Ethan Hawke felt lonely when being famous. In addition, he shared that it’s hard to break the image, he tried to make a different impression and showed his real self.  It made him sad when people want to selfie instead of chat. Daniel Radcliffe was shot to stardom as a child when he landed the lead role in the “Harry Potter” film franchise. Many people were surprised he hadn’t been messed up by fame. In fact, he was lucky enough to have supportive parents who helped him a lot when he struggled with fame. they taught him how to laugh off bizarre situations that come with fame. Source: © Harry Potter and the Sorcerer’s Stone/Warner Bros. and co-producers Cardi B has opened up about her anxieties surrounding fame and revealed that she feels she can’t be herself “anymore”. She was criticized for her speech during a Met Gala after-party. She shared that she joked when encouraging anyone to do drugs and always felt like being in the principal’s office most of the time. She complained about being famous that fame turned her into a prisoner.