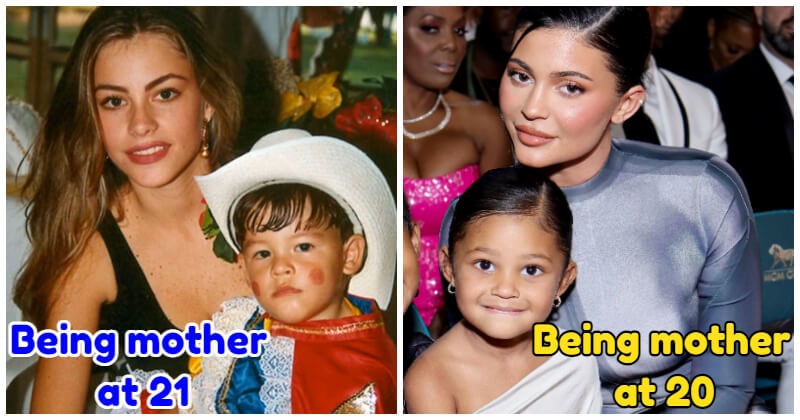 It’s never been simple to give birth, especially for women in their early twenties. While welcoming a newborn into the family is a joyous occasion, it also entails a tremendous deal of responsibility for the moms. Every ounce of energy they had went into caring for their child. Their lives get transformed, and their priorities shifted because they are now responsible for another human life.

In admiration of such parental figures, here are 10 celebrities who, in spite of becoming mothers at a young age, proved that you don’t have to give up on your dreams to be a good parent. Sofia Vergara became a single parent at the age of 21 after giving birth to her son, Manolo. Thanks to her advantage of stamina at a young age, she was able to accomplish anything she set her mind to.

Now that Manolo is a successful 30-year-old man, Vergara believes that her sacrifices paid off. Kylie Jenner always wants to be a young mother, so she became one. She and her partner, Travis Scott, welcomed their daughter, Stormi, when she was only 20 years old. “This is what I want to do, and if people accept it or don’t accept it, then I’m okay with every outcome.” Brandy’s daughter, Sy’rai, was born in 2002, around the same time the successful singer struggled to find herself. Thanks to the help from her friends and family, she was able to take it slow with securing Sy’rai and figuring herself out. In one interview, Reese Witherspoon admitted that she was afraid of becoming a mother to her daughter, Ava as the 23-year-old actress struggled to find a balance between her career and her motherhood. “I was just like every other mom and dad trying to figure it out.” Today Ava is a 22-year-old model and Witherspoon believes that every sacrifice she made as a parent was worth it. Candace and Valeri Bure started their family young. In 1998, at the age of 22, Bure gave birth to Natasha, who is now an actress, model, YouTuber, and social influencer. Despite the fact that Victoria Beckham is a prominent designer with several business triumphs to her credit, she considers becoming a mother to be her greatest achievement. Beckham gave birth to her first kid, Brooklyn, at the age of 24, proving that establishing a family at a young age isn’t necessarily a terrible choice.

Brooklyn is now 23 years old and works as a model and photographer, as well as hosting a cooking show. The singer and actress opened up about the difficulties she had as a 17-year-old mother. She admitted to having felt uneasy since she was often the youngest mother in the room, but she eventually recognized that being a good and capable mother had nothing to do with age. “I have met some of the most wonderful amazing moms who are anywhere from 20 years old to 50 years old, so young or old, love is all it’s really about.” Ryder, Kate Hudson’s first child, was born when she was 24 years old. Despite the fact that 24 is not a particularly young age to conceive a family, Hudson felt like a teen mother at the time. However, there is always a silver lining, and now that Ryder is much older than his siblings, he can always pitch in and assist his mother in keeping an eye on them. Adele struggled with postpartum depression after giving birth to her son at the age of 24. Even though she adored her child, she despised being a mother at the time. Taking an afternoon for herself once a week helped Adele get through this difficult time, and she began sharing her thoughts openly with her friends. Hilary was 24 years old when she gave birth to her first kid, and despite the fact that she felt ready to be a mother, she was constantly told, “You’re a baby having a baby.” Duff, on the other hand, was unconcerned with her decision. Being a young mother was difficult for her since she often felt lonely while raising her child.

When do you think is the perfect time to start a family? How old were you when you had your first kid? Tell us about your experience in the comments.