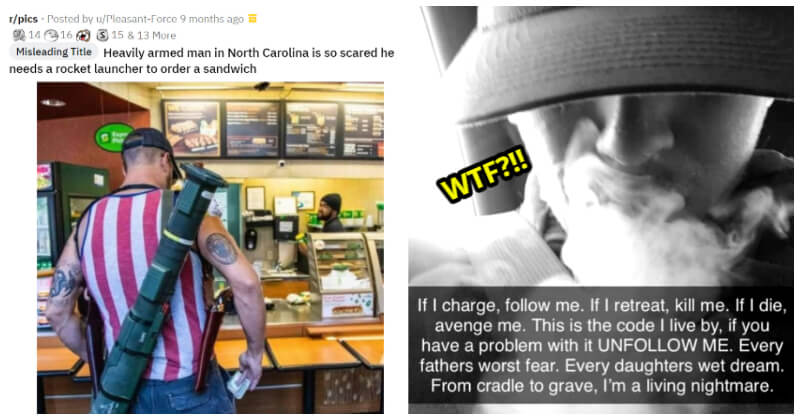 Being born as men, they take the responsibility to be the guardians of this society. People say that a man can never show his weakness to anyone because this world is unforgiving and dangers are all around. That’s why they cover themselves up in a tough guy’s appearance. But, maybe, under that intimidating look is a calm, gentle soul that beaming with love?

That would be interesting. We bet that you all have heard about ‘tough guys.’ Yes, they are guys who are obsessed with showing their manhood. They use cuss words excessively in any situation. They go around in public carrying a big gun. They boast that they have no fear, and people better watch out not to bother them. Well, that sounds cool enough, huh?

They indeed try hard to complete their tough-guy look. However, a good outcome doesn’t always follow your effort, like these guys. They tried embarrassingly hard to prove that they were tough, but we could only see that they were pathetic. Understandable. A lion doesn’t have to roar to prove it’s a lion, but lion cubs will love to do that.

It’s so cringe-worthy and sad to look at these people. Still, it’s also entertaining to see how these guys turn themselves into walking jokes in public. In the list below, we have collected some of the most hilarious and embarrassing tough-guy posts from the internet just for you. “From cradle to grave, I’m a living nightmare.” Let’s scroll down to check them out and have some good laughs. Be sure to reach the end of this post. #8 This man is terrorizing his teenage neighbors with a gun #9 This man came up with the most bizarre theory about dogs, which makes him look more stupid than tough #11 This man thinks his hoodie is intimidating #12 This man likes to hide behind his computer #13 This man is the “champion of death,” albeit being alive #15 This man has absolutely no chance with a woman #16 This man got embarrassingly heated over a silly Facebook video #17 This man thinks he could kick god’s ass #19 This man is a total weirdo #20 This man’s only personality trait is being tall #23 This man brought a whole-ass rocket launcher to Subway Toxic masculinity is still a problem these days. In fact, you don’t need to show your tattoo or your big gun to make you a man. It can even backfire and make you look like an idiot. Still, many people are falling for this false idea and guidance, resulting in absurd and hilarious incidences. Not gonna lie, if I see any of those ‘tough guys’ in public, I will just sit down and watch their performance. It’s entertaining, you know.

If you enjoy reading this article, please give it a like and share it on your social media outlets. And don’t forget to follow our page for more interesting content like this in the future. Thanks for reading and see you later.

15 Amusing Coincidences That Demonstrate How Mysterious Our World Is

If You’re Having A Bad Day Remember, There’s Always Someone Who Has It Worse

15 Pics Of People Being Lazy, Making Others Go Speechless

20 Weirdest And Wildest Reasons People Got Their Nicknames

22 Unlucky People At The Exact Moment Of Their Misfortune