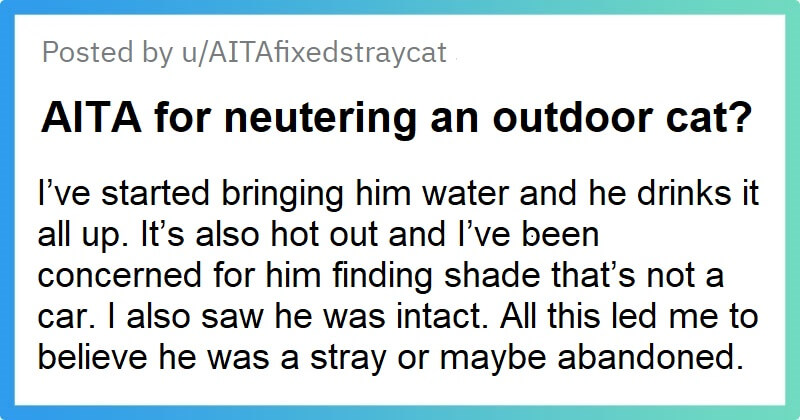 When you meet a stray cat, you may give them food and help them find their owners. However, when the man in this post saw a cat wandering around his apartment entrance, he went above and beyond all our expectations.

Taking to the subreddit r/AmItheAsshole, the man (OP) going by the name u/AITAfixedstraycat shared he met a cat wandering around his apartment. He believed the cat was a stray or was abandoned. It was also hot out, so OP started bringing him water and food. Not only did he feed the cat, but he also brought him to the local rescue to see if he was chipped. After knowing that he was not, he had him vaccinated, neutered, and even paid his vet bills.

“With some food I coaxed him into a carrier and brought him to the local rescue to see if he was chipped. He was not, and the rescue offers a discount for captured strays, so I opted to have him fixed for a low price. I also had him vaccinated and given deworming and flea medicine as well. Overall it was around $120 I paid.”

Sadly, his act of kindness was put into the wrong place. As it turns out, the cat is not a stray, and he has owners and a family. Despite doing the right things, he still felt terrible. He messaged the owner and let her know that her cat was in the shelter. Source: The Spruce (not the actual photo)

He wrote: “Anyways, yesterday I saw a missing cat ad on our neighborhood’s Facebook page. The picture was of the cat I just surrendered to the shelter. I felt terrible, so I messaged the owner and let her know that her cat was in the shelter. She read my message but didn’t respond until this morning.”

The woman called him out for stealing her cat and demanded he paid the fee to get her cat back. She even threatened him with a lawsuit.

“Guys, she cussed me out so badly. She basically said how dare you to steal my cat. She also said the shelter was demanding a $50 adoption fee and an application for her to get her cat back. She’s demanding I pay the fee and is threatening me with a lawsuit.”

OP knew he was in the clear legally, but he still felt bad for the cat owner. Therefore, he decided to went on Reddit to ask if he was wrong for worrying about the cat’s safety. Hard no, Reddit quickly responded.

Most of them agreed that OP was not wrong and called the owner out for letting the cat roam all over. They also pointed out that she was an irresponsible owner because she never neutered her cat or had him chipped. Irwin Family Has Saved And Helped Over 90.000 Animals In Australian Bushfires

These 30 Pet Owners Are Delusional As Heck!

OP’s Dogs Attacked Neighbor’s Cat, But OP Refused To Pay Vet Bills And Even Got Support From Reddit