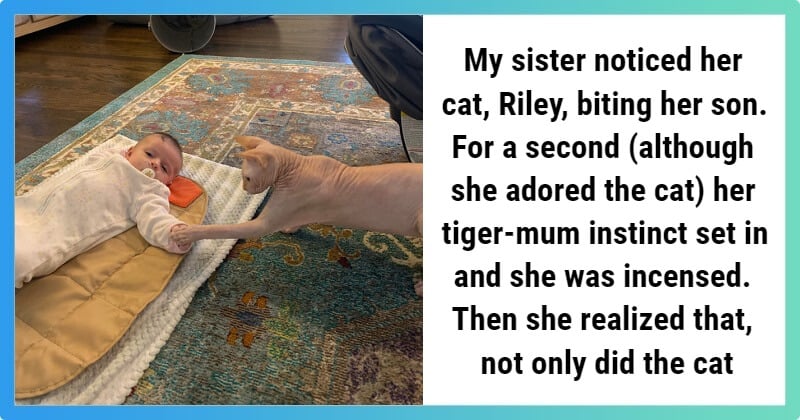 When it comes to having a pet around a kid, this is a situation that can cause concern for some parents. But in fact, having a furry friend by their side contributes innumerable benefits to the lives of children. Our fluffy pets are not just for fun and companionship, but they also teach children responsibility, empathy, compassion, and tolerance. They are likely to improve your children’s development and may have a major influence on children’s physical and mental well-being.

We believe that it’s so cool for kids to have fluffy best friends, and the bond between them is unique and unbreakable. Because of that, we decided to collect some of the cutest stories from parents to share with you how positive an impact an animal can have on your kid. Scroll down to read! No doubt that this is love!

“In a household, cats often assume new baby is new kitten and therefore it’s their job to help care for kitten. My cats growing up were always been great with little humans. The one I still have, Claire, actually let a toddler pull her tail and only called us humans for help. No biting/scratching. They can be such sweethearts.” lakeghost/reddit “We had a Keeshond when I was born and my parents told me they had to put him into training for a while because he was too protective of me when I was a baby. When people he didn’t know would come around me, he wasn’t having it. Great dog to grow up with and was always protective of me, just in a much gentler way after training.” JSA17/reddit “My sister noticed her cat, Riley, biting her son. For a second (although she adored the cat) her tiger-mum instinct set in and she was incensed. Then she realized that, not only did the cat leave no wound, but the toddler didn’t cry or even squeal (although he looked taken aback). The child was simply being checked every time he accidentally mishandled the animal, and my sister realized that her cat was training her child! Sis let nature take its course and both cat and son adored each other.” Plumb789/reddit “I had this type of relationship with our German Shepherd. My family had gotten her when my mom was pregnant with me, and she was truly a wonderful girl. She would let me do anything to her. I fell off the couch and landed on her and she let out welp and looked up and just went back to sleep when she noticed it was me. I was toddler so just a little thing. Her and I were the same age and it was a relationship I will remember forever. Animals are not just companions; they are family.”  Her_Shadowleaf/reddit “My parents rescued a Newfoundland 2 years before I was born and he was the sweetest dog. When I was learning to walk he just stood there and let me use his ears to hold as a was standing up. He always wanted to walk in between me and the gutter drain just in case I fell In. He lives to be 15 and was probably the best dog I could have asked for.” 1019gunner/reddit “I was raised by a corgi who would put himself between me and anything he thought was a threat. When my parents would put me to sleep in the crib beside their bed, he’d hop on the bed and watch over me the whole time, growling at anyone who so much as peeked in the door. I was his puppy.”  FeltAndFurious/reddit “My parents found an orange tabby kitten two weeks before I was born. He terrorized all the neighborhood cats but he’d let me carry him around like a rag doll. Lots of great stories about that guy.” TicTokCroc/reddit As a parent, you only want the best for your child, so you may consider adopting a pet for them to care for and learn from. As long as you train your pet positively and consistently, they’ll become a trusted soul mate and a good friend for your kids to play and grow with.

Did you own a pet when you were a child? How did they affect your childhood? Please let us know your answers in the comments below!

Meet Yana, The Two-Faced Kitty Whose Parents Ran Out Of Ink

These Photos Will Make You Fall In Love With Canada Lynx

15 Hilarious Cats Who Behave Exactly Like Us at Work