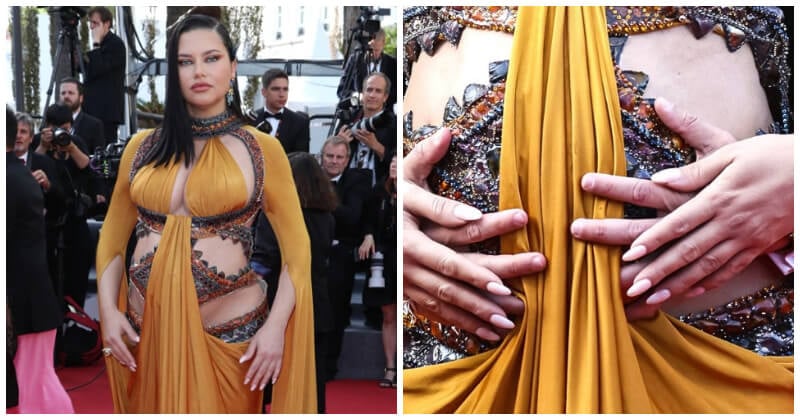 When it comes to maternity fashion, we probably think of loose baggy clothes or attractive fits that cover up the baby bump. For a long time, fashion brands were manufacturing very unflattering clothes that made pregnant women look unstylish. Luckily, maternity fashion has changed a lot in recent years, given the situation pregnant women feel confident showing off their baby bumps. Celebrities are no exception. Many female famous people and their stylists embrace the beauty of being pregnant and all that comes along with it.

Everything from fitted mini-dresses to dazzling gowns is now seen at events and on the red carpets. There are seemingly no restrictions on how to dress or even shying away from the public eye and going underground until giving birth. Many famous female celebs have forged the way for fashionable pregnancies to be widely accepted.

Below are 16 celebrities who prove pregnant clothes don’t have to be boring. Turner showed up to the 2022 Met Gala in a dark Louis Vuitton studded dress. The dress was completed with a high neckline and long sleeves. Turner’s ensemble was inspired by the evening’s theme, “Gilded Glamour”. In May 2022, the celebrity photographer, Miles Diggs, shared a picture of Shay Mitchel with the hashtag “pregnancy fashion” on Instagram. The actress looks fashionable in a green Milk White dress. She also put on Prada sunglasses and black Luce Minimale sandals. Miranda Kerr glowed in an Alex Perry gown just months before welcoming her third son while attending the Gruner and Jahr Spa Awards in Germany. Pregnancy number five was a surprise for Tori Spelling and she cherished the moments with her family.  In October 2016, she and her four children attended the annual Elizabeth Glaser Pediatric AIDS Foundation Festival in L.A. There, she showed off her fit physique in a tan shift dress with white lace detailing and high heels. Despite her second pregnancy, the model Nicky Hilton Rothschild looked beautiful in stunning outfits. At the New York premiere of “I, Tonya”, she dolled up her baby bump in a caped hot-pink dress with an embroidered yoke. She also wore light makeup that made her more charming. The singer Rihanna attended the Off-White Fall 2022 fashion show in Paris with her boyfriend Rocky. The “Love On The Brain” singer put her baby bump on display in a peach-colored leather mini dress paired with a matching shearling coat. She accessorized the look with knee-high strappy heels and plenty of layered chain necklaces. Ciara was one of the most show-stopping looks at the Vanity Fair Oscar party. The singer, who announced she was pregnant with her third child, showcased her maternity style in a unique gown. She wore a see-through gown that featured head-to-toe sparkles and put on a thigh-high slit. Ginnifer Goodwin attended the “Zootopia” premiere at the EI Capitan Theatre in the Hollywood section of Los Angeles when being pregnant with her second child. She concealed her baby bump in a printed multicolored Etro Spring 2016 pleated maxi dress with a ruched neckline and ruffled sleeves. Kim Kardashian looked fashionable when pregnant. Kim Kardashian wrapped up her pregnancy curves in an olive-green lace-up maxi dress by Balmain for the MTV VMAs. After that, she made an appearance at the InStyle Awards wearing a caped white column dress by Valentino. Kristen Bell showed off her growing baby bump on the red carpet at the 2013 Golden Globes held at the Beverly Hilton Hotel in Calif.  The actress looked gorgeous in a pale lilac beaded gown. Krysten Ritter revealed her first child on the way ahead of presenting at the Oscars in Feb 2019. While walking the red carpet, she showed off her baby bump under an elegant long-sleeved fitted lace gơn, featuring red floral appliques. Selma Blair is a chic pregnant woman. She was the picture of maternity perfection at the 2011 Grammy Awards. She opted for a simple scoop neck Lanvin navy and grey dress paired with hammered-mental cuffs and a snakeskin clutch. Adriana Lima returned to the runway on April 19 2022 to walk in Alexander Wang’s Fortune City show in LA. She looked beautiful in a black dress with a cutout front and thigh-high black boots. After a month, Adriana Lima gave her glamorous maternity style a regal twist while at the “Elvis” premiere with boyfriend Andre Lemmers during the 2022 Cannes Film Festival. Lima took to the red carpet in a dynamic fashion, wearing a sweeping golden silk gown. The dress featured a long draped skirt with flowing sleeves and a plunging high-necked top