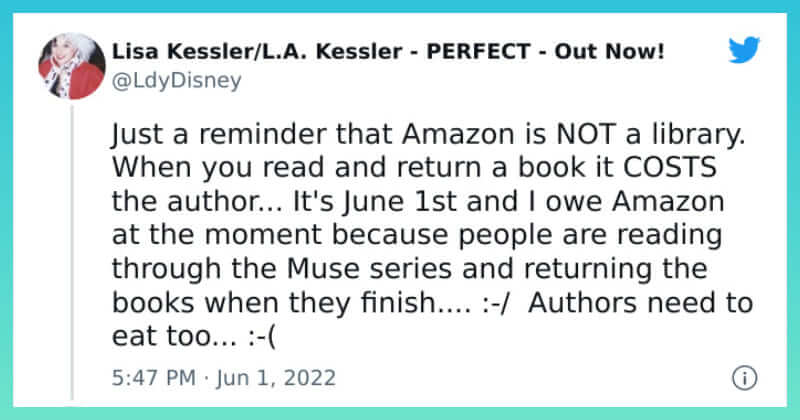 Customers nowadays prefer online shopping to the traditional one. There are many reasons for this. And convenience is the biggest perk. Where else can you comfortably shop at midnight while in your pajamas? There are no lines to wait in or cashiers to track down to help you with your purchases, and you can do your shopping in minutes. However, because the customers can’t see the product they are going to buy directly, there are many cases when the stuff they receive is totally different from the image on the shop’s website.

As a result, some e-commerce sites offer return policies. Return policies are in place to keep customers satisfied, but when they start abusing the system, it becomes an issue. A “hack” of buying ebooks and returning them once you’ve done reading them has recently become popular. The ethics of TikTok have been questioned after authors realized that their returns have increased and blamed it on a trend that started there.

After receiving several ebook returns, author Lisa Kessler took to Twitter to vent and discovered that it had recently become a trend Author Lisa Kessler is known for writing dark paranormal fiction. She has won various awards, the first of which was for her first novel, Night Walker. For best Fantasy-Sci-Fi-Horror, this book received a San Diego Book Award.

She tweeted to remind readers that Amazon is not a library and that she is being charged for each book returned, meaning the author is now indebted to Amazon.

In the tweet, Lisa emphasized that Amazon is not a library and that writers are charged for each book that is returned, adding that she now owes Amazon money In her podcast, The Perfect Podcast, which she started to promote her upcoming thriller Perfect, Lisa talked more about it. The lady says in the fifth episode that she had been a writer for ten years and that, throughout that period, she doesn’t get any returns.

She was therefore really shocked to see that in May, she had so many returns that she actually owed Amazon when she looked up her Kindle dashboard. As being upset, she went to Twitter to vent. Her experience was not unique, as several other authors also mentioned that they had just observed the same phenomenon. While talking with BuzzFeed, Lisa explained why she thinks this is happening: “I discovered that in March, there was a TikTok video instructing readers about this loophole in Amazon’s return policy allowing them to read books quickly and return them. It even had a hashtag, #ReadAndReturnChallenge, but I don’t think they realized that Amazon was turning around and deducting money from the authors.”

Lisa explained why she thinks this is occurring, “I discovered that in March, there was a TikTok video instructing readers about this loophole in Amazon’s return policy allowing them to read books quickly and return them. It even had a hashtag, #ReadAndReturnChallenge, but I don’t think they realized that Amazon was turning around and deducting money from the authors.” Lisa believes that this is the result of a trend that began on BookTok, where users urged others to read books and then return them to save money There are several videos of individuals debating the matter; however, it is unclear where the TikTok videos urging people to return ebooks in order to read them for free have disappeared.

Some people compared reading an ebook and returning it to eating at a restaurant and demanding a refund after the meal has already been consumed. Even if they unintentionally purchased a book, the majority of readers didn’t support this “hack” and in fact, haven’t even considered doing it.

Those who didn’t comprehend the metaphor of comparing a book to food—that it remains there even after you read it—were the ones who believed that returning an ebook wasn’t all that horrible.

They argued that readers need to have the option of returning a book because what if they weren’t satisfied with it? What if they found it objectionable and decided not to support the author? Of course, it’s a whole different matter if you accidentally purchased a book that you had never intended to read. In addition, most individuals don’t mind if a customer returns an ebook if they purchased a book and decide after reading the first few chapters that it’s not what they expected.

They and the writers find it frustrating when readers opt to return a book after finishing it. This was the case with Lisa Kessler since she saw that readers would return the entire series, and why would buy books three and four in a series they already knew they would not enjoy? Readers expressed indignation, saying that Amazon’s return policy is flawed and that they should do more to protect writers who chose to sell their works on their platform Because books are costly and there are undoubtedly people who enjoy reading a lot, this TikTok craze likely began as a simple way to save money. However, there are places like libraries where you may read as many books as you like for a small annual fee and it is really required that you return them.

If you prefer a digital copy, libraries also provide ebooks. By choosing an ebook, you are not harming the author because the library is paying for the book. A lot of people also brought up Amazon’s Kindle Unlimited membership plan, which starts at $9.99 per month and gives you access to more than 1.5 million items, including novels in other languages. Many people recommended that Amazon measure how much of a book a customer has read and stop allowing returns once they pass a specific percentage to remedy the issue. Some people believe that the return period should be shortened.

20 Classical Painting Memes That Are Way Too Hilarious

Neymar’s Dramatic World Cup Falls Have Been Transformed Into A Free Font, And It’s Hilarious

20 Things People Invented To Deal With Others Stupidity

25 Times IT Guys Encountered The Craziest Stuffs On The Job