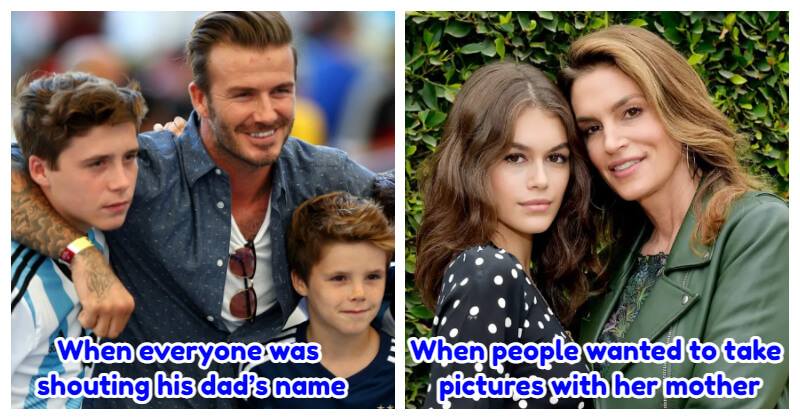 Growing up with famous people can have its perks, but sometimes celebrities’ kids have no idea that their mom and dad are well-known over the world. Despite their privileged upbringing, some celeb parents decide to keep that part of their reality away from their children in order to give them a normal life. However, sometimes these kids find out about their parent’s fame way before they have the chance to tell them.

For example, supermodel Cindy Crawford’s daughter Kaia Gerber shared with Teen Vogue magazine how she first learned about her mother’s fame. Their family took a trip to Disneyland to celebrate her eighth birthday and there, she realized there was something special about her mom. While she wanted to take pictures with princesses, everyone wished to take photos with her mom.

Keep scrolling down to see how 13 celebrities’ kids found out their parents are truly famous. In an interview with Complex magazine, Hilary Duff shared that her son saw her on magazine covers and wondered what she was doing. That was until a classmate revealed her name to him and her son told her “I know your name, Hilary Duff”. Kaia Gerber first realized her mom, Cindy Crawford, was famous during a trip to Disneyland. While she wanted to take photos with the princesses, people wanted to take pictures with her mother. She felt so strange but after that, she knew her mother was a celebrity. Harper Beckham first learned about her mother’s fame in a sweet way. Victoria gently introduced Harper to the dolls, including her alter-ego Posh Spice. Her daughter played with them and then realized that her mom is a fashion goddess and a former pop star who took the world by storm in the greatest girl band ever. This story was shared on Victoria’s Instagram. Pamela Anderson’s sons, Brandon and Dylan, didn’t know she was famous, despite visiting her on the set of “Baywatch”. In school, they always told their classmates that their mom was an animal activist and rescued plenty of animals. However, this changed when they went to surfing camp and their camp mates said who their famous mom was. David Beckham kept his fame under wraps for his son Brooklyn until he was 13. Brooklyn said that he finally realized his father was unique when attending a sporting event. He was shocked when everyone was shouting his dad’s name. Alexa Ray Joel didn’t know that she lived with two celebrity legends in her household. Her dad is the “Piano Man” Billy Joel and her mom is 90s supermodel Christie Brinkley. Growing up, though, she had the source of attention surrounding her family pegged all wrong. Alexa Ray Joel said: “I thought I was the star. We were always putting on plays, and dad would do the accompaniment, and mom would dress me up like a Disney princess and be filming everything.”

#8 Jack Quaid, the son of Meg Ryan and Dennis Quaid Meg Ryan and Dennis Quaid’s son, Jack Quaid, opened up about what it was like to grow up with famous parents. He grew up on film sets and thought that acting was a normal profession.  It wasn’t until Jack mentioned to his friends that he had been on set that their reaction aroused his curiosity. At the moments when his friends felt like it was cool, he realized his parent were celebrities. Ricky Martin made a conscious effort to fill his sons Matteo and Valentino in on his fame. When he thought they were old enough, he decided to let them watch one of his concerts from the audience instead of backstage. When the show was over, they came to me and said ‘Papi, you’re Ricky Martin.’ He replied ‘I’m not Ricky Martin, I’m your father.’

#10 Liv and Caleb, the children of Julianne Moore Liv and Caleb were teenagers when they found out that their mom was a big star. It was only when she won a high-profile award that it dawned on them. They were shocked that their mother had made so many movies and all the scandalous things she had to do in some of those films. Prince Jackson opened up in an interview about what it was like growing up as the son of late music legend Michael Jackson. He was aware of his father’s fame when watching some videos of his father’s performances. He shared “What blew my mind was when I saw these big, muscle-bound dudes fainting and having to be dragged out, so I was like.

#12 Georgia May Jagger, the youngest daughter of Mick Jagger and Jerry Hall In an interview for US magazine Interview. Georgia May said when growing up, she was never aware that her parents were internationally famous. It wasn’t until when she went on a tour with her father, and started to comprehend the scope of her dad’s fame. When it comes to her mom, she still thinks of her mom as being kind of a dork – a cooler one.

#13 Rumer Willis, the daughter of Bruce Willis and Demi Moore Rumer Willis is the eldest daughter of actors Bruce Willis and Demi Moore. She said she was a preteen when she found out her parents were famous. Like Kaia Gerber, it was a trip to Disneyland that gave it away. She didn’t understand why many people tried to take photos with her parents.