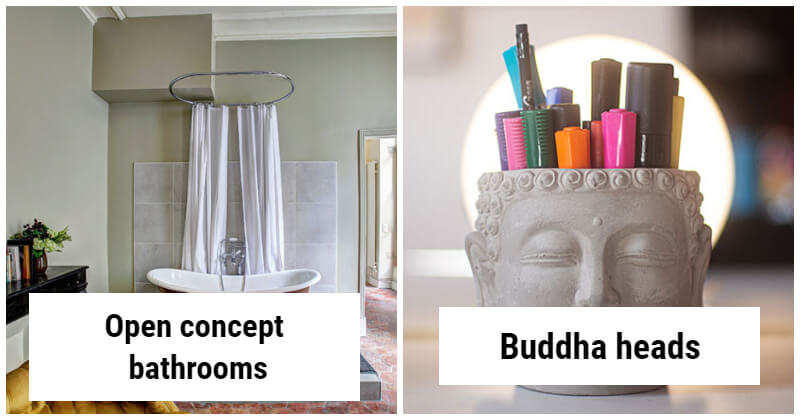 It’s quite simple to get caught up in the latest fashion trends when it comes to design. After all, many of us are overwhelmed by the numerous decorating alternatives, so interior designers try to help by predicting what’s in this year and guiding us toward the next great thing. But one thing is certain: many solutions that have become almost shockingly popular tend to age quickly. Not in a graceful manner, either.

Several postings on Ask Women and Ask Reddit sparked a rush of responses by urging individuals to share the current interior and home design trends they’d want to trash right now. What followed was a barrage of reactions that rightly ripped apart the most recent things we’d already wished to forget. People found plenty of answers to agree on, ranging from all-white everything to tropical print overload.

So, if you’re moving into a new home or simply looking for makeover ideas, grab a pen and paper and jot down some ideas to prevent making bad design decisions. We’ve compiled some of the most insightful responses from the thread below; upvote the ones you agree with and share your own design pet peeves in the comments! I don’t want to see my toilet from my bed. Buddha heads. Buddha heads became fashionable because American soldiers decapitated many statues in Laos and Thailand during the Vietnam War and smuggled them out. They were sold to museums across the world and people copied them to stick in their living rooms/bedrooms because “it’s so peaceful /I’m open to Buddhism”

Now when you go to Thailand you’ll see decapitated statues all over the country, statues that had remained intact until recent history. The reason for cabinets is so that no one can see your s**t. Also dust. I love smart tech in a home, but most of it is horribly implemented and just bad. You shouldn’t need touch screens everywhere to control your lights, or have to pull out your phone.

Also; my refrigerator doesn’t need to connect to the internet, ever. Carpeted kitchen. I have it and it’s THE ABSOLUTE WORST I live in an older subdivision in a suburb that is seeing a ton of development. Mostly McMansion type subdivisions are going up everywhere. There’s two things about these areas that drive me nuts.

First off, why do these developers hate straight roads so damn much? Trying to navigate through a newer subdivision is the biggest pain in the a*s because roads always seem to turn back on themselves. That s**t is dumb.

Second: why cut down every single goddamn tree you see and then plop down a bunch of big, ugly-a*s houses with zero personality and THEN plant a bunch of little baby trees? Why would anyone want to live in a house with no trees anywhere? If they spent any amount of time planning what they’re actually trying to build they could very easily leave large trees and patches of nature in yards or between houses. Instead they treat the development like a kid playing The Sims.

I effing hate new housing developments. They all look horrible and since most of them have HOAs it’s probably a bigger pain in the a*s to live in one. Floating stairs without banisters. That looks scary as hell. Bonus points if the stairs have no texture, good luck walking up and down a narrow, slippery stairway with no support I hate words in my house, in basically any form, hate the f*****g live laugh love signs, hate it even more when people do it like my mom and plaster everything in a combination of bible quotes, motivational quotes, and the worst of all the names of our family members.

Also hate anything that is clearly supposed to have a practical use that is only around for decoration, pillows, chairs, tables, if it’s something that anyone has to be told not to use because their first instinct is to treat it like any other thing of it’s kind then it’s stupid and I hate it. All white everything. I have so many friends (20-25ish) doing the all white furniture in an already white room with white or silver accents and I just don’t get it. Any little bit of dust shows up and it’s so stark that it’s borderline painful to look at if the room is sunny.

It’s totally personal, though. My partner and I do all black everything in white rooms. A lot of people absolutely hate it. Also, those “Eat” “Sleep” “Sit” “Gather” signs people like to put around their house. It’s as if common sense is nonexistent to the point where people need reminders of what they need to do in said rooms on their walls. Putting the microwave hideously low to the point where you have to crouch in order to move things in and out of it. Millions of pillows and cushions on a bed. It makes the room look instantly messy when you have to move them and stack them on the floor to get in. I’ve been an interior designer part time for multiple years and I could go on for hours about all the design choices many people make that just deserve to be kissed by a sledgehammer.

But if I had to narrow it down, I’d say these three things:

1. Tile Countertops. The look is massively dated and it’s impractical. You’d have to scrub the cracks a lot to get water stains and other substances that will be trapped inside. And when the tiles get damaged and loose your counter will be a pain in the a*s.

3. All white interiors. Just writing that irritated me. An entire white room psychologically bothers me. No color whatsoever. Unappealing to the eye and mind as well as near impossible to maintain from stains. All white is only good for rooms you never use which will never happen. When they use too many different materials on the outside. This wall is brick,this wall in vinyl,and none of it matches. TVs above fireplaces. Yeah, that’s a great height and angle if i wanted to watch while standing up Those sinks that are a bowl on top of the counter. It’s like they didn’t install the sink, and glued it to the bathroom counter. Mirrored furniture and crushed velvet cushions. I also hate crude prints in the bathroom that have “cheeky” quotes about bowel movements or urinating. It’s very tacky to me. Big windows in the front with no curtains or blinds. Who does that? What type of weirdos are like yeah what if all the neighbors and whatever strangers happen to be walking by can see into our living room at all times? I usually see this on homes that have that modern minimalist architecture thing going on, which tend to be ugly anyhow. They’re trying to look futuristic but in the near future they will be considered lame and out of style. Full open concept – especially when people take all the walls down in an older home with a traditional layout. I like seperation of space and defined rooms. I can handle partial open concept but that’s about it. We actually extended a wall in one of our house to create a more defined den and living room

Floor to ceiling windows in the private rooms of the home like bedrooms and bathrooms. Or giant window at the bath tub. If you in the middle of no where and have no neighbours I guess, but in a subdivision or city the curtains or build have to be closed most of the time.

Hilarious Moments When People Realize They Were Turning Into Their Parents

Some Of The Worst Logo Design Fails, As Pointed Out In This Twitter Thread

15 Pics Show That Online Advertisements Are A Big Fat Lie

Woman Walks Out Of Her Job Interview Right After Recruiter Says They Can’t Pay Her $21/Hour, Sparking Huge Online Debate

When People Got Drunk, They Were Funny As Heck!