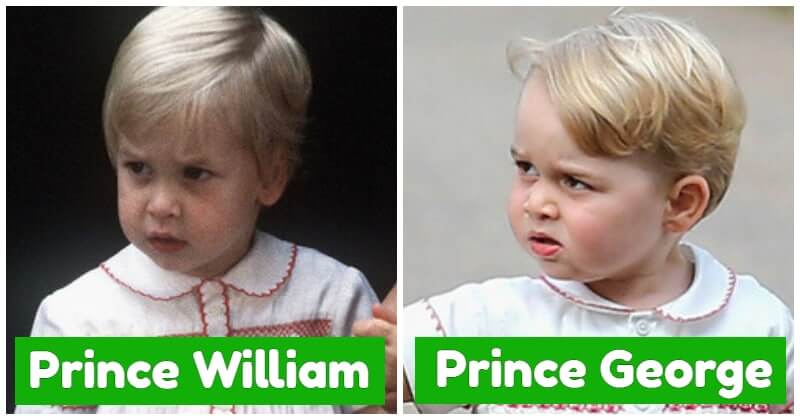 Today, celebrities who have famous parents are a dime a dozen. You sometimes don’t need the results of a DNA test to know they are related to each other. On social media, some celebrities share pictures of themselves and their kids at the same age and ask people about the resemblances between them. You might be surprised at how much they look alike.

Celebrities and their kids have a blood relationship, which means the kids inherit physical traits from their parents. The thing is whether they inherit their celebrity parents’ talents. What a tough question! Anyway, it’s interesting enough to see “the clones” of our favorite celebrities.

Today, we’ll compare the pictures of celebrity kids and their famous parents when they were the same age. Let’s scroll down and enjoy!

#1 Martin Sheen and Charlie Sheen at the age of 28. Legendary actor Martin Sheen starred in The West Wing and Apocalypse Now. Meanwhile, his brilliant son Charlie Sheen starred in Two and a Half Men from 2003 to 2011, becoming TV’s highest-paid actor in the process.

#2 Jon Bon Jovi and Jesse Bongiovi in their teens. Jon Bon Jovi is a legendary singer-songwriter, musician, and actor. He is best known as the lead vocalist of the rock band Bon Jovi. He worked as a janitor at the Power Station until he had his big break. And Jesse Bongiovi is the first son of Jon Bon Jovi. Now, he is a wine entrepreneur. Actress Robin Wright is globally known for playing Forrest’s true love, Jenny, in the 1994 classic Forrest Gump. And now, her true love belongs to her daughter Dylan Penn who is working as a model.

#4 Prince William and Prince George at the age of 2. Prince William is a member of the Brish royal family. He is the elder son of Charles, Prince of Wales, and the grandson of Queen Elizabeth II. He has 3 children, including Prince George, Princess Charlotte, and Prince Louis of Cambridge. Rob Lowe starred in the film St.Elmo’s Fire and portrayed the leading role in Parks and Recreation. His son, Owen Lowe, is known as a writer and actor. Yolanda Hadid, who was born in Dutch, is best known as a cast member of The Real Housewives of Beverly Hills. Meanwhile, her daughter Gigi Hadid works as a fashion model who walked the runway for the biggest fashion designers in the industry.

#7 Lori Loughlin and Olivia Jade at the age of 22. Lori rose to fame by portraying Rebecca Donaldson on the ABC sitcom Full House and its Netflix revival Fuller House. She has a beautiful daughter, Olivia Jade, who is working as a makeup, fashionista, and Youtuber.

#8 Minnie Riperton and Maya Rudolph at the age of 29. Minnie Riperton is famous for her five-octave vocal range which made her biggest hit 1975 single “Lovin’ You”. However, Maya Rudoph who is Riperton’s daughter found her success in the cinema world where she starred in the NBC sitcom Up All Night from 2011 to 2013.

#9 Kurt Cobain and Frances Cobain in their 20s. Kurt Cobain is famous for the 1991 album Nevermind which featured the hit single of his band “Smells Like Teen Spirit”. He has a daughter Frances Cobain who is popular on Instagram with over 1.5M followers.

#10 Stellan Skarsgård and Alexander Skarsgård in their 30s. Stellan Skarsgård who is globally known for his roles in the film Thor, The Avengers, and Mamma Mia! has a son named Alexander Skarsgård. Alexander Skarsgård found his success in The series Generation Kill and Big Little Lies. He was cast as the lead in the 2016 film The Legend of Tarzan.

#11 Kris Jenner and Kendall Jenner in their 20s. Kris Jenner is well-known for her appearing in Keeping Up with the Kardashians, The Talk, and America’s Next Top Model. Kendall Jenner is her daughter who has walked many big runways.

#12 Lebron James and Bronny James in their teens. #13 John Legend and Miles Stephens at the age of 1. The singer and pianist gained his legendary status with his 2005 big hit “Ordinary People”. He made history as the first black man to win an EGOT award. Another winning in his life is his son Miles Stephens.