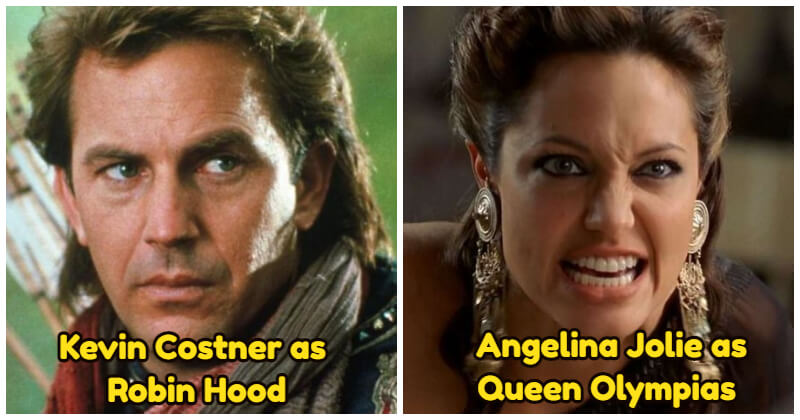 Casting directors that are responsible for choosing the cast is considered the toughest job in the entertainment industry. A movie may have a great storyline, but if an actor isn’t right for the part, filmmakers can kiss success goodbye.

Many box office flops are born from horrible casting choices. Whether it’s an actor who unexpectedly provokes laughter in serious roles or an actor whose public image clashes completely with an unsavory character, miscast roles can be particularly embarrassing for Hollywood. It is pretty hard for these movies to avoid negative comments and criticism from movie buffs and critics.

Here are 12 examples of movie casting decisions where filmmakers and fans didn’t see eye to eye. Scarlett Johansson seemed horribly miscast in the role of Black Widow in “Iron Man 2”. Many Marvel fans said that she was actually kind of yawn-including. They even suggested more potential actresses such as Hilary Swank, Emily Blunt, or Uma Thurman. After the movie “The Great Gatsby” was released, it received mixed reviews. Many critics called it “a failure” and declared that DiCaprio didn’t fit the character. The actor was supposed to depict Gatsy as a caricature and his character look like a clown. Source: © Harry Potter and the Order of the Phoenix / Warner Bros.

Bonnie Wright is well-known for her creativity and self-expression, but she doesn’t show her aspect to Ginny in “Harry Potter”. It’s hard to see an energetic sporty girl, that many of the students had a crush on. In “Kingdom of Heaven”, Orlando Bloom failed to get into the character of Balian of Ibelin. When seeing his performance in the movie, many viewers said that he didn’t have the gravitas or charisma required for such a part. Emma Watson is one of the most beautiful and talented actresses in Hollywood, but her performance in “Beauty and the Beast” didn’t convince many viewers. Many said that Watson was wooden and failed to show Belle’s main features such as empathy, sorrow, and patience. Source: © The Lord of the Rings: The Two Towers / Warner Bros.

Miranda Otto isn’t a bad actress, but it seems that the character Éowyn in ‘The Lord of the Rings” doesn’t fit her. She played up the fragility and gracefulness of the part somewhat, but certain lines just felt off. In fact, she felt far more natural in her bit role as the ex-wife in “Spielberg’s War of the Worlds” than she did here. Brad Pitt was 100% miscast in “Troy”, where he plays the vicious Achilles. Pitt has the demeanor and physicality to be a believable bad guy in ancient Greece, but he failed to do it. Although he worked out for 6 months to get buff for the role, he didn’t fit perfectly like his Troy counterparts. Alexander the Great was one of the greatest conquerors in history, and “Alexander” is the worst movie about his life. One of Hollywood’s big problems is its hesitation in casting older actresses, which is why Angelina Jolie, at twenty-nine, was cast to portray Alexander the Great’s mother. In addition, the critics didn’t like Angelina’s strange and caricature accent, which resembled a Russian accent a lot. Fans were excited when the Oscar-winning actress Natalie Portman was cast in the role of Jane Foster in ‘Thor”, but they were totally disappointed. Although she made a considerable effort to portray the character, her performance was so boring. Kevin Costner was in the role of Robin Hood in the movie “Robin Hood: Prince of Thieves”. Robin, in the legend, is a young hothead who gets in trouble, but Kenvin Costner made him into a war-weary old man. Halle Berry played one of the most important roles in “X-Men”, Storm. Despite winning the Globe Award and Academy Award, the actress failed to play the strong and regal African mutant princess. She looked too meek and cautious on the screen. Keanu Reeves starred as Jonathan Harker, the conscientious and hard-working young lawyer, in “Bram Stoker’s Dracula”. The actor is handsome and he looks good in costume movies. However, some critics called his acting one of the main disadvantages of the movie. His accent was terrible and let down his performance.