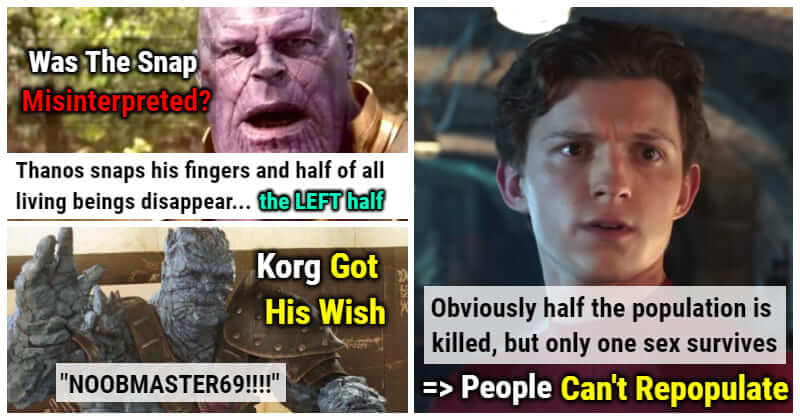 Doctor Strange’s cryptic “end game” strategy at the end of Avengers: Infinity War appears to have spawned an unlimited number of fan theories online. Everyone who has a hypothesis believes it is accurate, but what if this isn’t the case? What if every single one of these hypotheses floating about in space is correct?

It may seem absurd, but one Reddit user has a brilliant idea. Isn’t it true that Doctor Strange envisioned 14,000,605 possible outcomes to the situation? According to this user, there’s a good chance that at least one of these parallel universes has some truth to every fan idea.

1. The Earth Can’t Have Half Back Obviously half the population is killed, but only one sex survives.

The one where Spidey managed to get the gauntlet off and yeeted it into orbit. It didn’t do anything, just delayed Thanos for a few minutes, and everyone got to watch Tony berate Peter for 10 minute before the snap.

I love this one. I’m just imagining peter crying and tony yelling at him.

Peter: through sniffles and tears “I’m sorry Mr. Stark I figured he can’t breathe in space, so I chucked it into space!”

Tony: “Kid, he literally just threw a moon at us!”

3. Thanos Killed Himself After The Snap

Thanos snaps his fingers to kill half of all life but accidentally kills himself too.

Wow, I haven’t thought about the avengers disrupting Thanos so much [that] he accidentally kills everyone.

He was actually very surprised he was alive too, when he did the snap. Totally expected himself to be dead. I believe the directors commented on this fact.

4. Strange Would Have Died There’s two outcomes where they won but in one of them Doctor Strange has to die so he tries to shift it to another outcome.

In his movie, the Ancient One says that you cannot see past your death. If there was one timeline where he did die he wouldn’t have any clue if they won or not because he couldn’t see the end. He has to be alive in the timeline where they won because he was the one using the time stone.

5. What If There Is No Antman? Thanos kills Ant-Man in the snap.

My theory was that the quantum realm counts as a different dimension & thus the stones wouldn’t affect it.

What could’ve gotten Scott tho as if Thanos snapped a few seconds later when he was pulled out. even if he survived, he might’ve not realized how the quantum realm could help them. The infinity stones, instead of killing half of the population to disperse the resources, creates 1.5 times the resources. Thanos knew this but wanted the superheroes there to celebrate and help spread it safely. Dr. Strange felt this was anticlimactic.

What a great solution this would have been, like why didn’t he just do this to begin with.

Because according to Malthusian principals it wouldn’t have solved anything. If anything it would make things worse because population growth is exponential, and adding a fixed amount of resources (even if x3 or x5) is still just adding a fixed constant. All you are doing is pushing out the curve and stalling the problem.

Thanos was trying to convince people that unchecked population growth was bad, thinking that by showing the benefits the universe would limit growth going forward on their own

7. Korg Finally Had His Wishes Korg somehow gets the stones, and when he clicks his fingers instead of wiping out half of all life, half of all life find a pamphlet in their pocket telling them about the revolution.

One person is dusted, however. A specific Fortnite player.

8. Thanos Didn’t Know How To Snap (That Sounds Weird btw) Thanos finally tries to snap and then realizes that he doesn’t know how to do so properly.

Can you even snap your fingers with a metal gauntlet? It would be more like grinding the metal fingers together. What if it just doesn’t work. Like what makes him think the stones work this way to begin with? Has anyone ever used it before or is he just guessing that getting all the stones gives him a magic wish?

Combining the legends about the stones you can come to the conclusion that you can alter the universe to your will.

The reality stone can alter matter, but only matter it’s touching or is close to, and only for a little while.

The Mind Stone expands your mind allowing you to think and picture things beyond your normal limits.

The Time Stone allows you to alter time, travel through it and generally f*ck with it.

The Soul Stone provides a place in which the dead go, a pocket dimension of sorts.

The Power Stone provides power, acting as a kind of fuel source.

With all 6 stones Thanos is able to picture the entire universe across all of space in his mind, his gauntlet is able to harness the power of all 6 stones at once allowing him to alter reality by sending 50% of living beings to the soul world, killing them, and this action is permanent as the time stone prevents the reality stone from turning it back. Thanos snaps his fingers and half of all living beings disappear… the LEFT half.

11. Is There A Need Of Daredevil’s Appearance I don’t know but it involves daredevil fighting thanos in a hallway. Thanos gets arrested by the NYPD.

Then escapes via the Thanoscopter.

I let GO of the CUBE Thanos accidentally replaces the avengers with the justice league. *Big Wheel shows up and [messes] up everyone, except Hawkeye surprisingly.

It wouldn’t be Spiderman without Big Wheel.