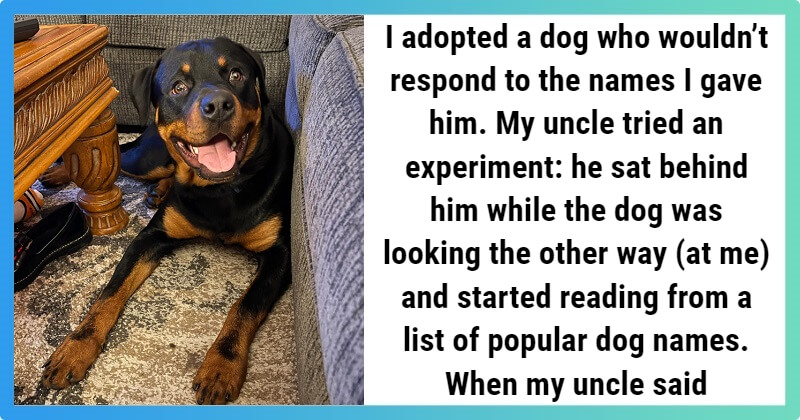 Yes, finding a suitable name for our pets is not as easy as we think. We are sure that every pet owner has a hard time choosing names for their fluffy friends. There are many owners who are lucky enough to find a perfect name by themselves, but some can’t handle it and have to seek help from others.

Reddit is a network of communities where people can dive into their interests, hobbies, and passions. It is home to thousands of communities, endless conversation, and authentic human connection. So it’s not surprising that many pet owners take to Reddit to ask for name suggestions from Redditors.

We would like to show you some pet owners who had to go on a quest to find a name for their pets and how Reddit users recommended naming them. They are named after their unique features, and you can turn this into inspiration for your furry friend’s name. Needless to say, these names are so perfect. Scroll down to check out!

#1 “I found this cutie on the street and decided to adopt her, any name suggestions?” “She is beautiful and so lucky to have you! Aurora Goddess of Dawn.” Ok_Fan7361 / Reddit

#2 “Baby lamb came in who will need to be bottle-fed! How stinking adorable is she?! What should we name her?” Name her Snow. Her fleece was white as snow… © earmares / Reddit #4 “This little dude needs a name, any suggestions?” Mote! Because he is completely dark but with a single mote of light under his chin. © Gravitron23 / Reddit Ginger Snap. She looks like dunking a one in milk, complete with little pieces staying behind. © ***WithThe*** / Reddit Juno — this is my husky’s name! When I chose it, I thought it would be unique until I lived on a block with 2 other huskies named Juno. © Wheres_my_b***t_hat / Reddit #8 “I’ve had this very good boy for almost a month, and still no name! He’s 8 months old and super chill.” “I adopted a dog who wouldn’t respond to the names I gave him. My uncle tried an experiment: he sat behind him while the dog was looking the other way (at me) and started reading from a list of popular dog names. 11 or so down on the list was the name, Rocky. When my uncle said it, my dog whipped around and looked at my uncle, like “yes!” And from then on, that was his name, and he came to us every time I called it.” © G***l-Ocelot-8281 / Reddit

#9 “My parents decided to adopt a family member today! Any name suggestions?” “My mother had a dog named Radar, she named him that not because he had large ears, but because he kept running into walls.” © MidnightsSerenade / Reddit #12 “Rescued this little one today! He needs a name! Preferably French…” “I am bad with names. I just call my cats Kitty or Little Badass depending on the situation.” © ekszdi / Reddit “I’m failing to see a problem with calling her “The Cat.” My cat has a name, but usually gets referred to as The Cat. Or Bad Cat. Sometimes even Good Cat. But he is always The Cat!” © Thebuch4 / Reddit

#19 “This brave girl needs a name! Any thoughts for this ferocious little one?” “I think Iris is a good name because she’s gray and iris is the name of a gray flower, kinda fits.” © Savings-Exchange-484 / Reddit