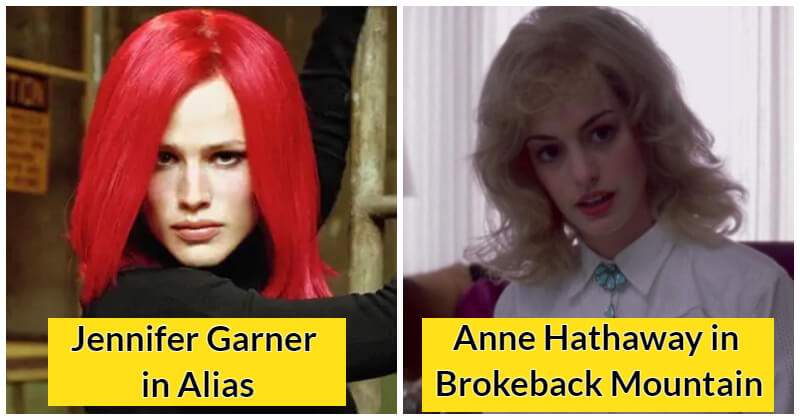 Costume design is tricky in a lot of movies. When it works, the characters are well-dressed, grasping the eyes of the viewers. On the other hand, bad costume design can make people distracted from these movies or TV shows. And one of the common failures of using costume design is wigs. Actors who wear bad wigs might easily ruin the movies and TV shows.

Even the best actor can’t overcome a bad wig. John Travolta’s hair in the 2001 Swordfish is worth mentioning. His hair in the movie was just terrible. Eleven’s wig on Stranger Things is another example. It’s so head-scratching that the filmmakers seem to forget how to dress characters nicely.

Here are the 20 worst wigs in movies and TV shows. Would you try any of these looks at home?

#1 Jessica Alba in Fantastic Four: Rise of the Silver Surfer

The bleach blonde wig that Jessica Alba wore in Fantastic Four: Rise of the Silver Surfer was almost as offputting as the blue contacts she had to wear with them. And I’m 90% sure a gentle breeze could’ve blown off Samuel Jackson’s wig in The Great White Hype.

#3 Nicole Kidman in the Destroyer Nicole Kidman wore a choppy wig that was so bad that it distracted audiences in the Destroyer. All of Anne Hathaway’s wigs from Brokeback Mountain were regarded as the most unforgivable wigs in the movie history.

#6 Alyson Hannigan in How I Met Your Mother Alyson Hannigan in How I Met Your Mother was every college student who cut their hair and gave themselves bangs at 3 a.m. Jennifer Garner’s hair in Alias was so bright that it made our eyes hurt.

#8 Nicole Kidman in Top of the Lake Nicole Kidman wore a choppy wig that was so bad it distracted audiences in Top of the Lake. Taylor Lautner donned a long wig for his role as Jacob Black in “Twilight”. ‘I Would Not Want That Hair!’, he revealed. Shemar Moore’s wig in Diary of a Mad Black Woman is one of the worst black hairstyles in movies and TV shows. I’m not sure if I’ve seen something more obviously a wig than Ginnifer Goodwin’s in Once Upton A Time. Halle Berry’s hair in the X-Men movies is so awful. It looked like it was photoshopped onto her head. Peter Dinklage owned his hilarious hair in The Boss. It was so weird. Jennifer Lawrence’s wig is considered the worst wig in the X-Men movies. Terrance Howard’s wig in Empire made him look just like a ragamuffin doll.

#17 Samuel Jackson from The Spirit

In the 2008 Spirit, Samuel Jackson said, “You like my hair? Gee thanks, just bought it.”

Dacre Montgomery’s wig on Stranger Things was so bad yet he still looked very confused. Tatiana Maslany’s portrayed seven characters on Orphan Black and this character made her on the list of the worst wig ever. Explanation About Free Guy Lazarbeam In A Cameo Role As Himself