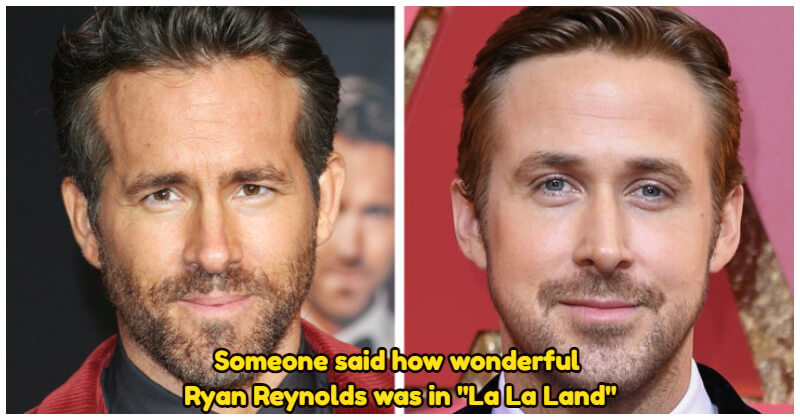 Some celebs bear a striking resemblance to other famous people. What happens if a celebrity is mistaken for another star. Apparently, this happens in Hollywood more often than one might think. Several celebs share similar physical features, from their eyebrows, and hair color, to facial expressions, which have led to some embarrassing moments over the years. Some consider them funny coincidences, while some don’t enjoy any comparison with others.

We can’t forget the moment Margot Robbie thought was Ed Sheeran at a boozy Christmas bash. The prince and the singer have red hair and a short beard that makes Margot Robbie take Prince Harry for Ed Sheeran. For this reason, Harry felt annoyed with Margot, he was like “Shut Up”. Until now, people sometimes remind that misunderstanding.

We’ve rounded up 10 stories in which celebs admit they were mistaken for other stars and some of them actually have fun with it. Ryan Reynolds isn’t shy away from talking about his similarities with fellow actor Ryan Gosling. He shared that at the 2017 Golden Globe Awards, someone said how wonderful he was in “La La Land” and he just went with it. Keira Knightley appeared on “The Late Late Show” and said fans mistook her for Natalie Portman. She was even chased through an airport and signed and took a picture as Natalie. Zooey Deschanel has said that she is often confused with Katy Perry. She has been approached by fans of the “Last Friday Night” singer on multiple occasions and has been asked for Perry’s autograph. Perry knows about it and asked Zooey to play her in the music video “Not the end of the world”. That makes Perry’s fans more confused. Although Mila Kunis is eight years older than Sarah Hyland the physical similarities between the two beautiful actresses are most bizarre. Sarah admitted that she is often mistaken by Mila’s fans. When they finally met at a Nylon party in 2010, Mila joked that she felt happy when being called Sarah. Isla Fisher used to get mistaken for fellow actress Amy Adams all the time but the constant comparisons never really bother her. She shared she and Amy Adams often laugh at it because Amy has blue eyes and she’s got brown. In an interview, Fallon asked Margot Robbie about Suki Waterhouse’s recent housewarming party in London and she revealed an embarrassing story. During the rest of the party, she took a trip to the photo booth with her model friends and a redheaded mystery man. She thought that was Ed Sheeran but was actually Prince Harry. Lucy Hale used to be mistaken for Selena Gomez but didn’t have the heart to disappoint the star’s fans. She went along with it and pretended she was her. She revealed that one time, a fan thought she was Selena Gomex and tried to take her phone to call Justin Bieber. Helen Hunt shared a funny moment on Twitter when she visited her local Starbucks.  A Starbuck barista mistook her for fellow Oscar-winner, Jodie Foster and even misspelled Jodie’s name. It isn’t the first time. Helen Hunt revealed that a grocery store cashier confused her for Foster and she had to show him her ID to convince him she wasn’t lying. The former “Glee” star shared a story on Instagram of a fan who thought he was the “Game of Thrones” actor, Kit Harington and asked him for a picture. Darren Criss said he wasn’t him and suggested getting a photo to commemorate this moment. In a case of mistaken identity, Reese Witherspoon was Carrie Underwood for a brief moment. The Oscar actress Reese Witherspoon tweeted about an encounter she had with a fan who approached her at a local restaurant. She wrote: “To the woman in the parking lot who just asked me if I was Carrie Underwood: You officially made my day!” and then Underwood replied: “Your day? That lady just made my whole life!”.