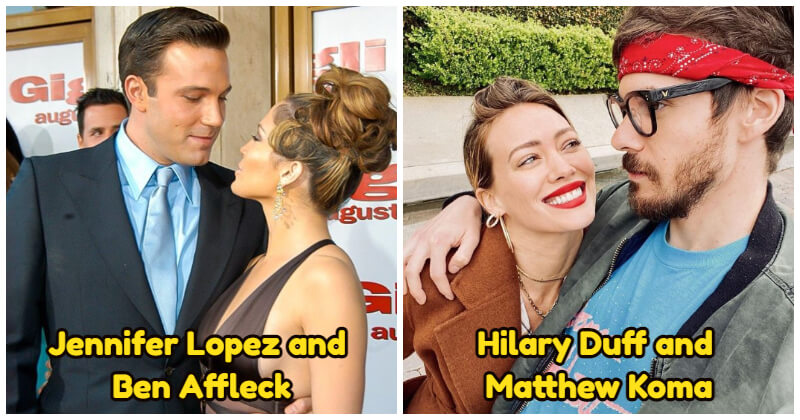 These days, couples seem to give up on their relationship easily. Sometimes, a breakup just clarifies things in a good way, rather than being a final ending. It helps you figure out your priorities and make wiser decisions before entering a new partnership. Sometimes, a breakup is just a difficult chapter that a couple has to go through before finding their way back to each other.

Every relationship has its ups and downs, sometimes, they may end if you aren’t in the right mindset for a long-term commitment. Celebrities have also a hard time making their relationships work, especially when they need to balance their work and personal life. After their breakups or even divorces, they cherish the relationship even more.

Here are 8 couples who kissed and made up and proved going through rough patches only makes you stronger.

After Jennifer Lopez’s divorce from Judd, the actress, and Ben Affleck went public with their relationship. In November 2002, Lopes confirmed the happy news – they get engaged, but over a year later, the two split up. Nearly two decades after they called it quits, Lopez and Affleck departed for a weeklong vacation to Montana. After that, they get back together. Justin Timberlake and Jessica Biel first crossed paths at a birthday party and they quickly fell in love with each other. In March 2011, they called it quits, but that wasn’t the end of their love story. The duo reunited months later and got engaged in December of that year. Now, Justin and Jessica are the parents of two children. The pop star Justin and the supermodel Hailey Baldwin first meet when they were teenagers. They dated for a short period when Hailey was 19. Despite their break-up, they remained good friends. In July 2018, the couple confirmed their engagement with a long Instagram post and got married in 2019. Hadid and Malik have had a definite on-again-off-again relationship. They first got together in 2015 and then announced their first breakup in 2018. After they parted ways several times, they stayed together. In late Sep 2020, they welcomed their child, a daughter named Khai. The explosive chemistry between the ill-fated “Game of Thrones” couple wasn’t just for show, Rose Leslie and Kit Harington become a married couple. They first connected during the second season of the HBO series when they portrayed star-crossed lovers Jon Snow and Ygritte. While their relationship was cut short in the storyline, the pair continued to spark dating rumors off-screen among fans. They confirmed their relationship in 2012, but after a few months, the couple broke up. They didn’t part ways for long. Less than a year later, they reunited and in 2018, the couple officially tie the knot. Pink has found her true love in her husband, Carey Hart. The twosome met in 2001 at the Summer X Games in Philadelphia. The couple dated for two years before breaking up for the first time in 2003. They reconciled a year later and in 2015, Pink proposed to Hart at a motocross race. A year later, they tied the knot in Costa Rica. Now, they’re a parent of two children, Willow and Jameson. The “Lizzie McGuire” star Hilary Duff and musician Matthew Koma is one of Hollywood’s most adorable couples. They officially started dating in 2017 but split up after a few months later. Despite several months apart, the couple got engaged in May 2019 and tied the knot that December. Now, Duff and Koma have two daughters, Blanks Violet Bair and Mae James Bair.