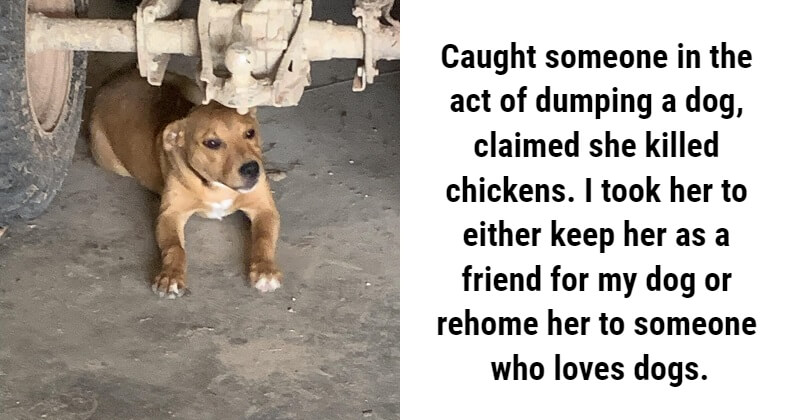 We love dogs and consider them family members. But no matter how long they live with us, they are still animals that work by their instincts. Therefore, they may hunt and kill other animals such as chickens and ducks to keep their hunting skills from rusting or simply to have fun.

However, many dog owners don’t seem to understand this. They punish them, hit them, and even dump them when they hurt or kill other animals. Recently, a Reddit user (OP) who goes by the name u/IComplimentYourPet caught a person in the act of dumping a dog because she killed chickens. Looking at the dog’s face, OP couldn’t ignore her and decided to take her in. “My MIL cussed the dude up one side and down the other (it’s lucky she was in the side by side or she would’ve fist fought the dude). I took her to either keep her as a friend for my dog or rehome her to someone who loves dogs.”

She captured some pics of the dog and shared them on the subreddit r/dogs. “Had to take her in, anyone in sw WV Want a dog? Lmao.”

Redditors quickly responded to the post. Most of them felt sorry for the dog and praised OP for her act of kindness. They also slammed the dog owner for dumping her. But after all, it’s good that she has someone to take care of her. The top comment with over 350 votes belongs to the user pctechadam. “Please don’t give this dog away to just anyone I would even suggest asking for a rehoming fee. My little guy was picked up as a Christmas gift free from Craigslist and then dumped on the side of the road a week later. People can be jerks especially if what they got they paid nothing for,” he said.

OP then replied to his comment, she wrote: “Tbh I was half joking. She’s eaten up w fleas and an amazing girl. I told the dumpers I’d keep her and train her so she’s 100% my responsibility. I know she was dumped, she didn’t just show up.. so I’ll care for and love her. Edit: fleas AND ticks, I’m attempting to help her but there’s a vet visit.” The user zzid2d21 said: “I live in a very rural area and dumped dogs and cats is a frequent occurrence… Every time I see a box by the side of the road I don’t think “trash” I think “kittens”. There’s no animal shelter in my county, I have to drive them the next county over to get them to a shelter. I have pets. I have working animals. For the amount of gas it took to drive all the way out where I live they could have been taken to the shelter. It’s even no kill. People just suck.”

A person who goes the name TruckerNick on Reddit wrote: “Thank you for being a good person! I don’t comment much but this made me smile. As a trucker I see TONS of dumped/abandoned dogs and it kills me because I can’t do much for them, so thank you for being awesome.”

10+ Pets Who Can Get Cozy Anywhere They Want

This Rescue Pit Bull Thinks He Is A Cat, And His Family Keeps Sharing Pics That Prove It