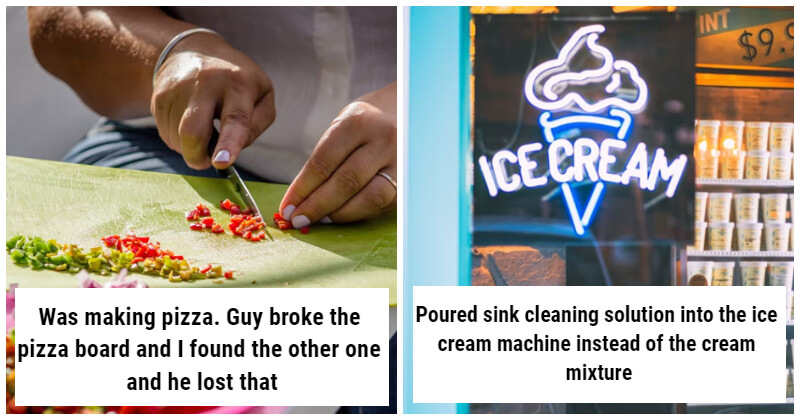 Being human entails making mistakes. Every day, we have several mishaps, whether it’s stumbling into a glass door or sending an email to the wrong person. But every now and again, we manage to make such a blunder that we surprise ourselves and everyone else.

“What’s the biggest mistake you’ve seen an inept coworker make?” said Reddit user xk543x a few days ago in a post on the network. And the feedback has swamped the website’s comment section. So we decided to assemble the greatest (or worst?) of them, and I’m not sure whether I’m impressed or disappointed by these individuals.

We were able to contact xk543x, who volunteered to tell us more about the post’s origins. They added, “I was just chilling and drawing on my sketch pad when I came up with the idea to ask Redditors this question.”

xk543x believes that work mishaps are unavoidable and that the most of them aren’t a big matter, but it’s a problem if you manage to make people doubt your expertise.

At the end of the day, they believe it all comes down to how much the business pays their employees. “Don’t expect someone to devote their entire life to a profession that would still be screening applications tomorrow if you died today.” I was working in an open plan office that had a small kitchen area at one end, microwave, kettle, sink, toaster and water cooler.

We saw one of the managers fiddling with the toaster for a while, looked like she was trying to clean it. It never occurred to her to remove the crumb tray, she was poking around inside it with a knife while it was still plugged into the wall. People just sat back and watched, wondering how long before she got zapped.

Then she turns on the tap and lifts the toaster towards the sink. Someone stepped in then to stop her.

You might just write this off as someone being a bit dim but she was the Health & Safety Officer for the building. Brand new guy is seated next to the CEO. He proceeds to put his head down and fall asleep on the table. During the meeting.

They woke him up at lunch to fire him. Took the wrong coffin to a funeral. Someone else had to drive to the cemetery with the correct deceased on board, and thankfully they made it before the viewing. Tried to retrieve his lighter from a deep fat fryer with his hands. Boy was that fun to clean up. Had a coworker land a plane on the edge of the runway. Like the starting edge. Cracked a landing gear leg and bent a turbine blade in one engine. Then the scatter brained old moron doesn’t log it or tell anyone. Just parks it and walks away. The next crew doesn’t notice the damage, because it’s really not easily detectable. So they go flying and get a bunch of weird s**t going on with the port engine. When they turn back, the f*****g gear wouldn’t lock down. Fortunately they were able to get on the ground and stopped without making themselves or anyone on board dead.

All we did was fire him. No reports to our regulator, no criminal complaint about his conduct. In hindsight I should have made those complaints myself rather than leaving it to our management. Removing the plastic wrapping from a pallet of 5 gallon cans of (highly flammable) acetone. He didn’t have a box cutter so he proceeded to melt it with a lighter I used to work for a landscaping company and over the course of a summer I witnessed one of my co-workers accidentally set 3 different things on fire (a hedge trimmer, a truck, and himself) Not a mistake necessarily, but I once witnessed our chief accounting officer (and our only accountant; it was a small company) type in values into two Excel cells, pull out a calculator, add the two numbers together in the calculator, and then type the answer in a third cell. She had apparently been doing this for years, with sheets consisting of thousands of rows. I explained how to use formulas and copy them but she apparently forgot because I saw her doing the same thing again months later. I worked as a Radiation Protection Tech at a power plant that was re-fueling. My job was to sit outside of a contaminated area and if anyone wanted to take something out of the area (tools, etc.) I had to make sure it didn’t have any radioactive particles on it. To do this you wipe the tool with something like a tissue and then hold the tissue up to a machine called a frisker. If the needle on the frisker goes above a threshold then the tool has to be cleaned or left in the area. One day I come back to relieve a guy who had been sitting outside the area for 2 hour. He tells me there’s been no issues and everything has cleared. I look at the frisker, lean over and turn the machine on. I worked at a company with a shared inbox. One guy sent all of his emails with a distinct font and color. He was super untrustworthy and sucked at the job.

One day he sent an email to a customer from the shared inbox but put my signature on it, to make it seem like it came from me instead of him. He left the font and color the same as all of his other emails.

He didn’t last long there after that. The designer, creative director and head of production all missed that there was an eight day week on a calendar. We sent 10 000 copies of a useless calendar to a client. Rightly so, they refused to pay for it. My wife worked at a gas station and found out her coworker, who had been there for years, had been refilling the napkin dispenser by cramming them one at a time through the front slot. She walked up and unfastened the back and apparently his jaw hit the floor. He had never considered that there might be a better way to do this. I hired a new employee on Friday and gave him directions to the job site for Monday morning. He got there early and helped thieves load all of the building material on their truck and take off. The webcam showed him stopping traffic so they could leave. I worked for a non-profit that hired a guy in fundraising purely “for his rolodex” and they couldn’t care less about any of his job functions as long as he kept bringing more rich people to fundraiser parties. Well when the pandemic hit and we were forced to go remote, it became clear how incompetent he was with technology, and how he’d been coasting for years in the office by sticking to phone calls instead of email, etc. We had our first major online fundraiser coming up and I warned my boss that this dude had no idea how Zoom worked – never muted himself, camera up the nose, treated it like watching a YouTube video. But again, he was the guy inviting all the rich people to the event, so they didn’t want to “lecture him about a computer program” and “hurt his ego”.

Then in our massive 200+ person zoom event, he set his laptop on the bathroom counter and proceeded to take a shirtless, nasty old man dump complete with grunting, splashing, and squelching. It was so loud it drowned out the speaker. They had to end the event early because they had no way to mute him and it kept going for a full two minutes with no sign of stopping. I nearly threw my laptop out a window that night. Poured sink cleaning solution into the ice cream machine instead of the cream mixture and I had to stop them, they then said “I’m sure it’ll be fine, it was only a little.”

No that would poison people. I had to clean out the whole machine top to bottom and refill it. I ended up throwing away nearly a whole bucket full of contaminated ice cream mixture.

I would also like to add that the containers didn’t look anything alike, the sink stuff came in big plastic jugs with screw tops and the ice cream comes in carbord cartons (like orange juice) that you have to cut open. so I don’t know how she could have possibly mixed the two up.

The Most Sexist Dating Tips From The 1930s

20 Things That Will Make You Say “Well That Escalated Quickly”

Employee’s Raise Request Is Denied, And The Company Can’t Function Without Him

17 Images Captured Food Served In Everything But Plates And Bowls

20 Feel Good Posts That Will Warm Your Heart