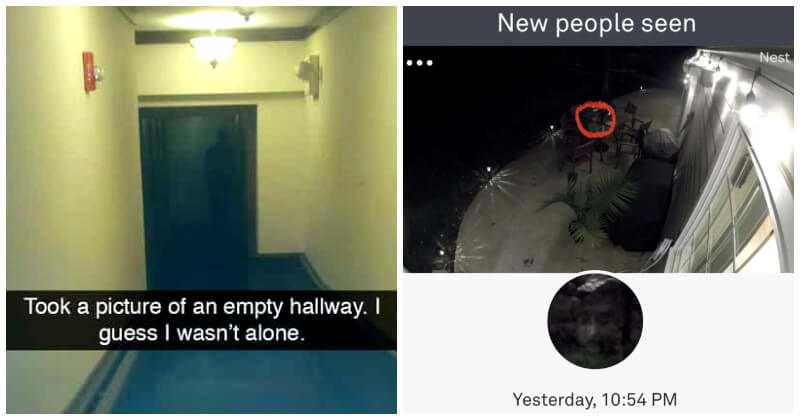 The invention of cameras has brought to life many benefits. Now we can record memorable, historical moments at ease. Even more, these machines allow us to capture the impossible. In case you have a question, yes, we’re talking about ghosts and paranormal activities.

In the distant past, when the camera wasn’t a thing yet, people could only imagine ghosts and spirits based on what they heard from others. But now, thanks to the camera, we can ‘see’ the ghost. Okay, controversy is still circling this matter after years. Some believe that it’s just a glitch in the system that make the camera capture something that wasn’t there. Others believe that it’s definitely ghosts in those photos because, eh, there’s no other way to explain it.

The existence of ghosts is a controversial matter itself. But, even though there’s not yet a definite answer, we have plenty of evidence to back up the claim that ghosts are real. In the list below, we have gathered some haunting photos people have taken of ghosts (possibly). Look closely at these photos, and you’ll see that something’s wrong with them. If you’re curious about the spiritual world, this post is just right for you.

Now, let’s scroll down to check out these 20 bone-chilling photos. We suggest that you probably should read this post with others, or else you may have a sleepless night tonight.

#1 Lurking in the background So, the story of this is that my friend had just moved into her new place in downtown Charleston, South Carolina. Her dog hopped up on the chair, she thought it was cute, and sent me a pic of it. Months later, her girlfriend noticed something in the back of the hallway. She was home alone, doors/windows closed and locked.

#2 Checking on the baby #4 From behind the door

#5 In a dark hallway My family and I went there to eat at the Pirate House and we were told that it was haunted, so after dinner we decided to walk around a little bit and take pictures just to see if anything would pop up. We didn’t expect much of anything but thought it was fun either way.

When I looked through my pictures of the trip, I found this photo. It was taken in a hallway… a completely empty hallway. I used a Motorola Droid. This photo has been unedited other than a little bit of cropping.

#6 Living alone in a new house #7 Waiting in the stairwell #8 Unfamiliar face in the mirror Full story: 6+ years ago, ex-GF went to Malacca, Malaysia for a holiday with her husband and two kids. After checking into the hotel room, [the] youngest kid (3yo) kept crying and subsequently fell into a fever.

Family group chat asked if they reached safely, she took a snapshot of the TV while in bed to send to family and say yeah, now chilling and watching TV. Brother points out the weird thing in the mirror. They freak out and demand to change rooms. Fortunately, the youngest kid recovers from fever after.

#9 As seen on a baby monitor #10 Handprints on the window #11 A visit from her father This photo was taken by my friend who decided to take the photo because her dog kept looking at this part of the room. Her father recently passed. She recognizes her father because of this specific shirt. The photo was taken at night with all windows having curtains closed. #14 Checking on her loved one Her daughter was sitting at her kitchen table eating a snack when she received a notification on her phone from the monitor she set up in her dad’s room to keep an eye on him because of his health. The notification was that movement was detected, and she realized it was her mother checking on her dad herself. He passed not too long after. Maybe she was telling him to come with her.

#15 Standing in the doorway This doorway, the one right above, there’s also the bathroom doors. And he LOVES standing in the living room right in front of the couch. NEVER sits on the couch EVER. On occasions, when there are lots of people, he will make himself known by physically showing himself briefly. Freaking everyone out that caught a glimpse of him.

#16 Stranger in the background My mom sent me this photo a couple of years ago. It was taken by someone she knows. This picture was taken at Jeffrey’s Cliffs in Hawesville, KY. They claim that nobody else was there when the picture was taken. I assume it was taken on a phone. This place was only recently opened to the public in 2018, this was taken around that time. #19 Looking through the window Some people feel like checking their CCTV after reading this post to know if there’s something abnormal inside their house. Yes, definite;y. When you are about to buy a house, you should take pictures of as many places in the house as possible. By doing so, you may know if the house is occupied by something evil. Many people have tried this and confirmed it worked, so why not? Better safe than sorry. We bet that you’ll not want to move into a haunted house by accident, do you?

Atheists Are Sharing What They Believe In, And They Are Totally Hilarious

20 Times Weddings So Tasteless People Just Had To Document It

18 Strangest Wills Written That These Lawyers Decide To Share

People Have No Idea What These Objects Are, Redditors Help Them With The “What”

Neighbor Willfully Complies With Mom’s Demands For The Profits From The Bake Sale, And Now She’s The One Who Has To Pay