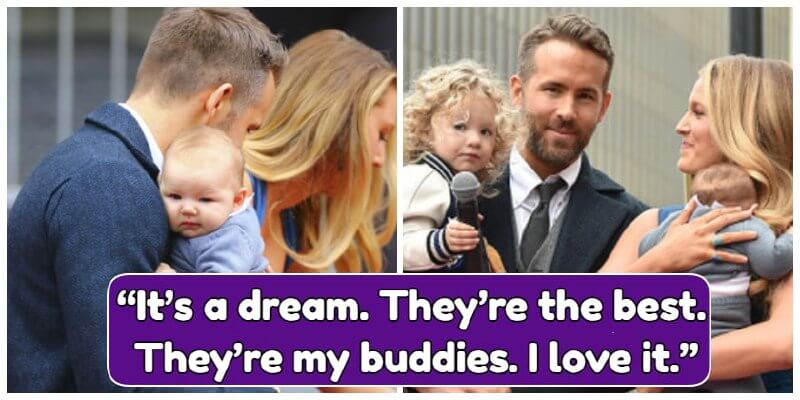 A man’s life is gonna change when he decides to get married and welcome his kids into the world. These feelings are so special that only those who experienced them can fully understand. Celebrities are no exception. Many famous fathers have undergone these blessing moments. They might all agree that being a father is not easy. As they have an extremely busy schedule, they do not have much time for their families. But it is not a big deal. They treasure every moment they spend with their loved ones.

However, some celebrities have learned how to deal with difficulties when having a family. They also prove that they not only make their family happy in their movies but also in the real life. Looking at the pictures of their smiling faces in the list below, we understand fatherhood brings the most beautiful moments in a man’s life.

Today, we have compiled a list of 8 celebrity fathers who share how happy they are with their families. John Krasinski never minds showing his love for his wife Emily Blunt to the public: “For me, the best days of my life started when I met my wife — that’s the truth, it’s not just me saying it because it sounds nice on a card. She’s one of the coolest people, she’s so talented, she’s beautiful, and she’s certainly out of my league.”

John and Emily have 2 daughters together. He stresses that his wife is his hero. Ryan Renold and Blake Lively often share their happy family’s pictures on social media. They have 3 daughters together and Ryan shared: “It’s a dream. They’re the best. They’re my buddies. I love it.”

Blake has taken the most favorite role in her life, posting on Instagram, “You’re the heart and soul of every moment this family shares. I’m grateful for the light and for the kindness you smuggle into each and every second of our lives. I see you in the eyes of our children.” Hugh Jackman and Deborra-Lee Furness tied the knot decades ago. The actor said:  “When I met Deb, it was 10 times better than my single life. And she had confidence in herself. I had a massive crush on her instantly.” At the moment, Jackman and his wife share 2 adorable kids.

Jackman and his wife faced a lot of challenges, but it ain’t nothing when you met the right person in the right place. And now they find trust and strong connection in each other. Chris Hemsworth’s acting career might not flourish, but he has an admirable family. He didn’t hesitate to say everything he has is thanks to his wife, Elsa Pataky. His wife definitely helps him a lot in his career, supporting him in the most challenging time of his life. Chris is grateful for his wife. Jimmy Falon and his wife Nancy Juvonen got married in 2007 and have had 2 kids via a surrogate. Becoming a father, Jimmy said that his life has changed in “the most exciting, amazing” way.

To describe his wife, Jimmy wrote: “I’d be nothing without my wife. She’s the coolest. She’s the greatest. She is the smartest. She’s the funniest. I love her so much. She’s like the — it’s like your best friend for the rest of your life.” The Matthew McConaughey and Camila Alves duo is an example of a happy family. McConaughey often spends time with his wife and children. Once, he shared about his family: “If you go deep in a rom-com, you can sink the ship. In my life, though, I was going very deep. I found the love of my life in Camila. We had a newborn coming. I had more things to get angry about, laugh about, have more joy about, and be sad about.” Prince William has spoken out about his family, saying that “having children is the biggest life-changing moment, but it’s also one of the scariest.” Still, he admitted that he found a lot of difficulties in life, but his wife is always there for him: “Me and Catherine particularly, we support each other, and we go through those moments together and we kind of evolve and learn together.”

Prince William also told the public by chance: [Kate] has the coldest hands ever. But as they say, ’Cold hands, warm heart.’” Although it’s a joke, there’s so much warmth in his words. Pierce Brosnan was married twice and found happiness again with journalist Keely Shaye. They have tied the knot for more than 20 years. Indeed, he had a great marriage and he was lucky enough to find love again. They were meant to love each other.