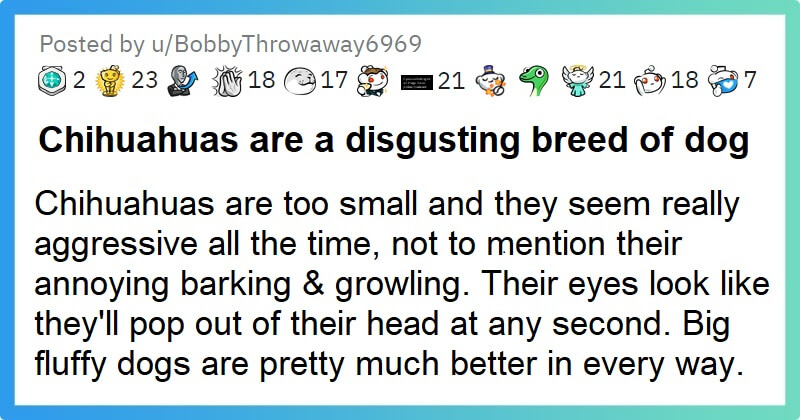 Chihuahuas are known for being smart and sassy. Fans of the Chihuahua just can’t get enough of that cute little dog breed. However, many people hate them because they are loud, obnoxious, busybodies, and cowardly. They are small in size, but big in personality. Despite their small size, they are so aggressive and confrontational.

A Reddit user who goes by the name u/BobbyThrowaway6969 is one of the people who hates this breed of dog. Recently, OP went on the subreddit r/unpopularopinion to share his opinion, which has caused a debate among other users.

At the beginning of the post, OP claimed that “Chihuahuas are a disgusting breed of dog.” He then explained why he hated them and showed his love for big dogs.

He wrote: “Chihuahuas are too small and they seem really aggressive all the time, not to mention their annoying barking & growling. Their eyes look like they’ll pop out of their head at any second. Big fluffy dogs are pretty much better in every way.” His post clearly resonated with several others as it attracted 45,000 upvotes and over 3,000 comments since being shared online. Most of them didn’t agree with OP and pointed out that Chihuahuas are not bad, and they deserve to be loved like other dogs.

“lol but still be nice to them they didn’t ask to be bred,” Redditor Justdontevenworry wrote in the post’s top comment, which has received more than 5900 votes.

Another user going by the name Zeus_Kira replied the top comment, “Please be nice to me too I didn’t ask to be born.”

Redditor mrstipez whose comment has received more than 4700 votes said: “All Chihuahuas seem to have, at one point, recognized that they are a Chihuahua and remain forever disappointed in that fact. Some take it out in anger, others just look embarrassed or apologetic. Edit: thx for awards. This is something I’ve clearly put thought into, I’m glad I could spread awareness. Also, everyone likes awards.” Redditor thugnyssa commented: “Something that someone told me that made me really think: you don’t hate small dogs, you hate small dog owners. Which is so true. Most small dog owners (especially chihuahua owners) let their dogs act like absolute shit heads. It’s not the dogs fault their owners don’t properly train them.”

Some users gave more information about Chihuahuas to protect them and their owners.

“To expand on what u/Chrisonthemountain said, there are two types of chihuahuas: apple head and deer head(yes, there are long hair and short hair but that really doesn’t make a difference).

Apple head are what most people think of when they imagine Chihuahuas. They have bulging eyes, too short a nose, and a myriad of health problems from selective breeding. Sadly, the AKC views this as the correct trait.

Deer head chihuahuas are not a product of selective breeding and as such look healthy and not like God playing a cruel joke. Not only do they actually look like a dog but they body size is usually bigger and more proportionate. They also have very few health problems and their temperament is not aggressive. They bond very closely to a single person and unlike their deformed brothers, only react with anxiety when separated. Finally, chihuahuas have been around for hundreds of years. They were depicted in paintings by the Toltecs and were burned with their bonded person when said person died. As I mentioned earlier, they don’t have many health issues besides the trait Xolo dogs also suffer from: losing their teeth. As such, these dogs can live up to 20 years.

PS. I don’t even like small dogs. I just feel bad for this one getting shit on all the time.”

Another said: “Chihuahuas actually come in two different types ‘apple-head’, which is the big eye type, and ‘deer-head’, which look more like terriers. I never thought much of them as a dog, but my neighbors have two and, to be honest, they’re a super sweet breed of dog, friendly and people-oriented with behavior that’s more like a cat than anything else. They certainly yap a lot but that’s also on the owner to mitigate.”

20+ Dogs Who Can Cat Better Than Cats Themselves