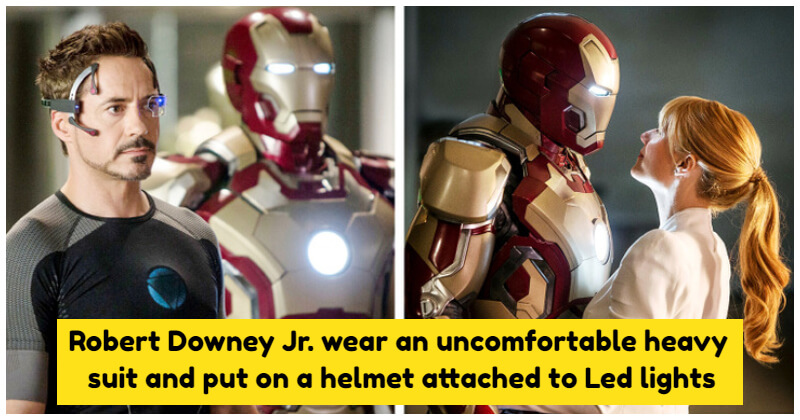 Makeup and costumes play an important role in the success of a movie. They help enhance the experience of the audience by making the characters in movies realistic. When we shower the actors with praise for the effort put into their roles, we forget that they resort to transforming their bodies to embody the characters. It is inevitable that actors wear elaborate makeup or put on bulky costumes for hours, which might even turn actors’ stomachs. That really takes a heavy toll on them.

For example, Jennifer Lawrence was in the role of Mystique, the mutant with the ability to shapeshift into anyone in “X-Men”. The actress shared that her body was wrapped in prosthetics and was painted blue color within 6 hours. For her, transforming into Mystique was an exhausting process.

Below are 10 times celebs shared their invisible struggle. Kit Harington played Jon Snow, the legitimate son of Lyanna Stark and Rhaegar Targaryen in “Game of Thrones”. During filming, he literally got a heavy cloak on and he wished that his costume would be lighter in the last part. Many may not know that Carrey reacted so harshly during the starting days of “How the Grinch Stole Christmas” production. The first time that the makeup team put the suit on him, it took about eight and a half hours. During the film production, he had to wear the Grinch costume 100 times. Iron Man, played by Robert Downey Jr. is one of the Marvel Cinematic Universe’s brightest stars. In the movie of the same name, the actor had to wear an uncomfortable heavy suit. He also put on a helmet attached to Led lights that blocked his view. In “Avengers: Age of Ultron”, Paul Bettany wore partial make-up on set, sometimes blue, sometimes red or purple. The actor also shared that he put on a super-tight costume for 10 hours and it squeezed his body. When starring in “Harry Potter”, Tom Felton had to dye his hair platinum blond every 10 days to capture author J.K Rowling’s description of his character, Draco Malfoy. That made him look like a bad boy. Jennifer Lawrence revealed that three layers of blue paint airbrushed onto her while filming in “X-Men”. It took six girls about seven hours to paint her full body. After many painful blemishes developed, the actress called in a doctor to pop those pus-packed pustules. She also figured out some ways to avoid future skin irritations. Jennifer Aniston had one of the most iconic haircuts of the ’90s with “The Rachel” on Friends, but the actress wasn’t a fan of the memorable look. Back in 2011, in an interview, the actress said that Rachel’s hair was the ugliest haircut that she had ever seen. At the age of 11, Miley Cyrus embodied a pop star in “Hannah Montana” and that meant she had to have blonde long hair and put on some glittery tight things. The fragile little girl played a 16-year-old girl in a wig and a ton of makeup. At that time, she felt embarrassed and wanted to quit her role. Anthony Daniels landed the role of a lifetime when he was cast as iconic robot C-3PO in the very first “Star Wars” film. Many might not know that he was shocked to realize how uncomfortable it was the first time he wore a robot’s costume. He shared: “It was horrible. I had completely lost connectivity with my body, the world”. Benedict Cumberbatch admitted that the outfit he wore in “Sherlock” was so small that he couldn’t breathe in it. The actor added that he couldn’t go out in public wearing them due to their resemblance to the detective’s garments.