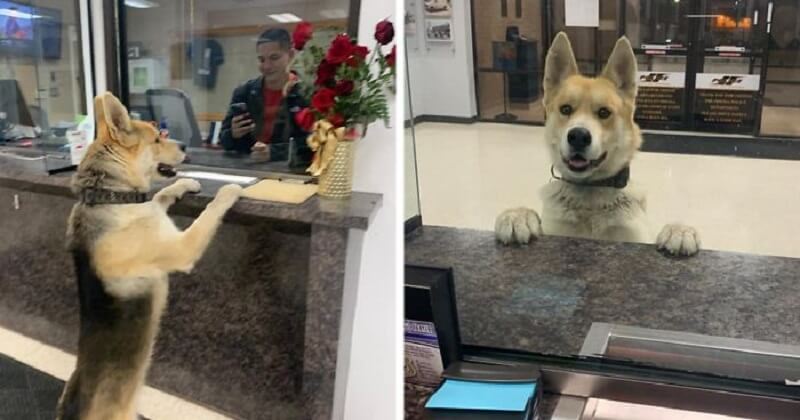 You know that when you’re lost, you can tell the police officers to look for help. So, when dog Chico lost his human, he figured out that the best place to go is the police station. It sounds crazy, but this smart dog did just that. He walked into the Odessa Police Department in Texas and reported his issue like the good boy that he is. The police officers received this unexpected visitor in the early hours of the morning of February 11. The polite boy strolled into the police station and hopped up onto the counter. He gently put his paws onto the front desk to let them know about his issue – he “was missing” from his family. Sergeant Rusty Martin was among the officers there to receive him. He said that the dog didn’t seem distressed about his lost status at all. “We’re thinking he wanted to apply for a K-9 position after eliminating a Lassie type situation,” wrote on Facebook.

The officers said the dog received “lots of love and attention”. “We were all excited to have him in the building,” Martin added. “We had a tennis ball and threw it in the lobby for a bit. Everyone loved him.” Despite enjoying Chico, it was time to return him to his rightful owners. However, it wasn’t easy as his ID tag had fallen off from his collar. Therefore, animal control was dispatched to check for a microchip. But before they arrived, Chico had quickly snuck out of the police station unnoticed.

Luckily, he headed straight back to his owner who reported he got back and is safe and sound at home after his little adventure. “He ran out just as quick as he came in,” Martin said, having posted about the incident on Facebook. “The owner responded the next day [to say that] it was his dog and he had returned home. He lives about a mile from the station.”

What a good boy Chico is. Share this article if it made you smile today!

20+ Pets Who Are Good At Showing Their Emotions, The 7th Picture Will Surprise You!