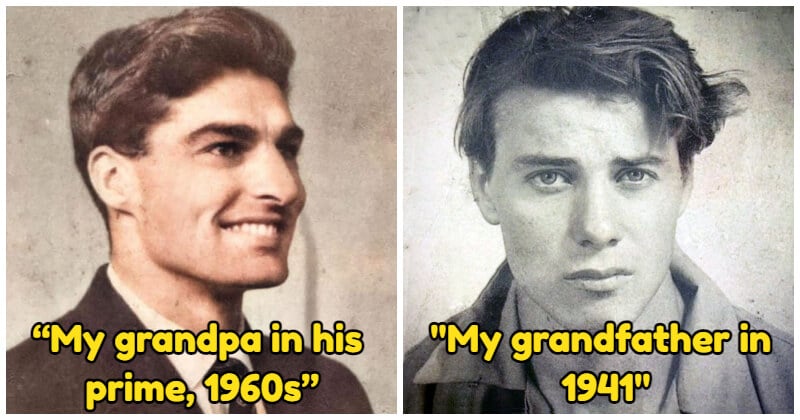 Nowadays, we often admire the beauty of handsome actors like Robert Pattinson, Zac Efron, Brad Pitt, and George Clooney. The reason is simple, one of the many requirements of an actor is having an attractive face. I don’t mean you won’t have any success if you don’t have looks, but it’ll be quite a challenge. However, there are handsome men out there that have nothing to do with Hollywood. Why? Simply because they have other dreams to follow, just like us.

What does this tell us? It means that handsome men have existed throughout centuries, not just now. Good-looking lads have captured the hearts of many women, both in the past and the present. It’s no surprise that your grandma always brags about how handsome your grandpa was when he was young. Your grandma’s probably telling the truth. Try to look at your grandpa’s old photograph, and you might be in for a surprise.

Still don’t believe me? See these photos of 23 charming men from the previous century to see for yourself.

#1 “My great-grandfather in his WWI uniform” #2 “That strange feeling when you realize your great-grandfather was a hottie.” He was definitely a looker back then! Now he’s a cute old man. #6 “My grandfather the day before he shipped out with the Marines, 1941” He’s the reason Eastern Europe is so attractive. Saved them in more ways than one I see.

#7 “My grandfather circa WWII. He watched Pearl Harbor happen in Hawaii and joined up. He surfed with legends in Honolulu.” What a gorgeous man. I love the way he has pushed his cap back to show his style and his waving locks. Everyone in the 50’s had awesome hair. #13 “My grandfather when he played for the Oklahoma Sooners” #15 “I had the most handsome grandfather.” Reminded me of Wally from Leave it to Beaver.

#16 “This is my great grandfather he was 19 years old when this picture was taken in 1938. After doing some research it turns out that today is 102 years since he passed away.” Looks like Conan O’Brien if he were a suave super spy. #20 “My great-grandfather was a WWI flight instructor and I just found a photo of him.” #23 “My great-grandfather in his WWI uniform”