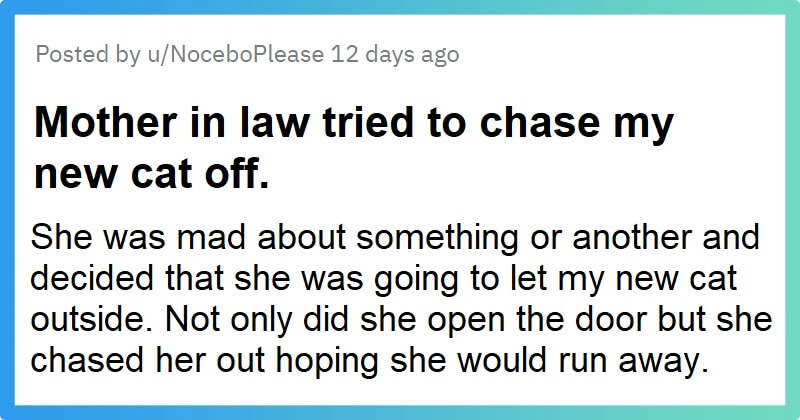 If you’ve heard stories about mothers-in-law, you’re familiar with the stereotypes about them. They have a bad reputation for hating their daughters-in-law. From petty behaviors to horrific acts of vengeance, they are called “monsters-in-law”.

A Reddit user going by the name u/NoceboPlease (OP) also has a mother-in-law who is always mad about something. Therefore, when OP got a new cat, the mother was not happy and decided to let the cat outside.

Taking to the subreddit r/pettyrevenge, OP wrote: “This isn’t really something that I did that was petty but was done to me and backfired. She was mad about something or another and decided that she was going to let my new cat outside. Not only did she open the door but she chased her out hoping she would run away.” “She stayed around the house snd ever since then she has been an indoor/outdoor cat. She even prefers to potty outside so I don’t even have to worry about a litter Box! I can tell my MIL is mad that my kitty stuck around but I think it’s hilarious,” OP continued.

After reading her post, Reddit users quickly replied to blast her MIL for hurting her cat and trying to make the innocent animal homeless because of her madness.

“What a horrible person that she would hurt an animal to hurt you! She sucks,” Redditor Dani3113kc wrote in the post’s top comment, which has received more than 550 votes.

Redditor OblongAndKneeless whose comment has received nearly 200 votes said: “I hope you make your MIL poop outside as well.” The Reddit user NullHypothesisProven said: “Wow your MIL is a shit person to try to make an innocent cat homeless because she’s mad at her son. That is worrying behavior. Are y’all working on setting some boundaries to protect yourselves?”

OP then replied to this comment: “This is typical behavior for this woman. She’s very childish… And It’s a work in progress, but yes.”

NullHypothesisProven added: “Yikes, it’s typical? I’m going to upgrade to “sounds pathological and abusive,” then, and I’m glad you’re working on limiting your exposure to her. Best of luck to you, your spouse, and your kitty! And I do hope she wouldn’t do anything like poison the cat.”

“I am not sure why she is even allowed in your home. If someone ever did that to my cat, I would ban them from my house and after telling them off, they would be dead to me. I would never speak to her again,” the Redditor iluvcats17 said.

The user Odd-Phrase5808 replied iluvcats17: “Exactly, pets are family and what she did was tantamount to animal abuse – deliberately chasing kitty out in hopes she’d get lost and possibly die (lucky for you she was a kitty who could handle the outdoors: my spoiled cats wouldn’t know the first thing about surviving outside, being indoor cats all their lives). Kick your b***h mil out of your house and your life, she’s evil, pure, and simple!”

All images are for illustrative purposes only. What do you think about this post? Tell us your thoughts in the comments below!

Here’s Why We’re So Obsessed With Cats