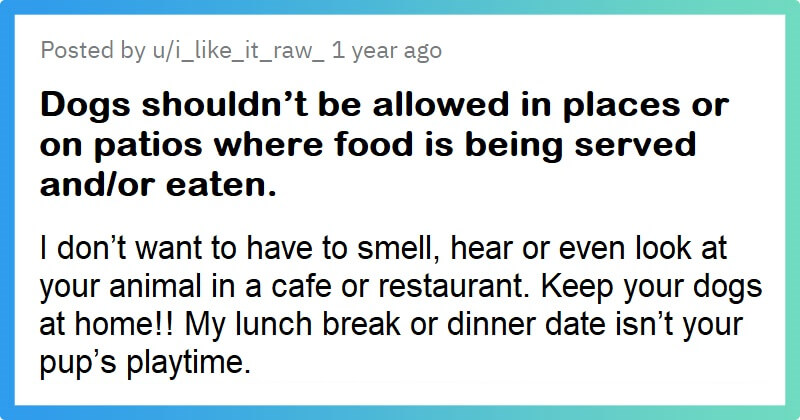 Dog owners love their dogs and consider them family members, so they think their 4-legged friends should be allowed in restaurants and pub patios. They think well-behaved dogs should be welcomed in these places and be joined for a pint or two.

However, many people, especially people who are not pet lovers, don’t think so. They think live animals should be banned from anywhere food is prepared, packaged, handled, sold, displayed, served, or eaten. A Reddit user who goes by the name u/i_like_it_raw_ is one of the people who agrees with this. She went on the subreddit r/unpopularopinion to share her opinion with the hope that other Reddit users have the same opinion as to her. Sadly, she got harassing messages and negative comments for her unpopular opinion.

In her post, OP shared that she hates dog owners who take their dogs to cafes or restaurants. She doesn’t want to have to smell, hear, or even look at their pets in these places. She also shared a bad experience that led her to hate dogs. “I was eating a sandwich in Tampa once at a place that allowed dogs on the patio and one came over and started licking my leg mid-meal. This is gross- not to mention unsanitary. Keep your dogs at home!! My lunch break or dinner date isn’t your pup’s playtime.” After getting harassing and threatening messages via PM, she then edited her post, shared her thoughts, and gave more information.

“Wow. Wasn’t expecting to wake up to this much hate. I now understand the “rip inbox” thing. I’ve been called an asshole, entitled, a dick, a baby bitch told that I’m probably fat, threatened, told to fuck myself, and been called many other names….all because I don’t like dogs near me when I eat. Thanks everyone!

I had no idea this place allowed dogs. I got a seat on the patio and a little bit later this couple sat down a table away from me with a dog. It wasn’t advertised as a “dog friendly” eatery, or I would have sat inside.

I am now getting harassing / threatening messages via PM. Instead of responding to all of them, I’ll say this here; it’s pathetic that you chose to wake up today and harass someone on Reddit that had a differing opinion of you. Good day.”

However, some users, even dog owners, side with her and agree that some people can be pretty inconsiderate when it comes to their dogs. 10+ Proud Four-Legged Moms Who Will Instantly Capture Your Heart