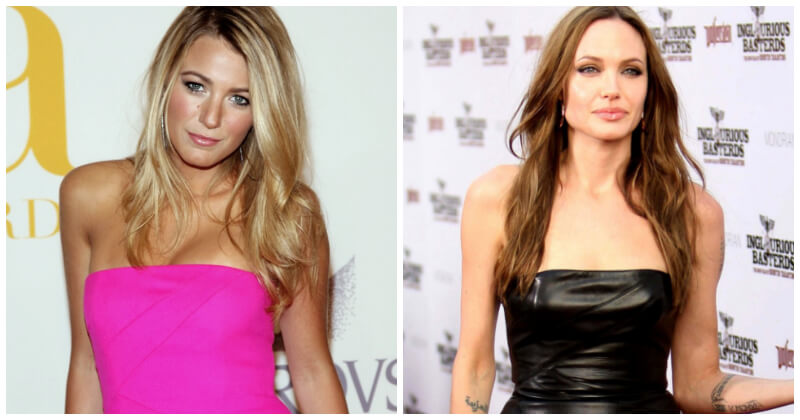 Many of us go to the same average-priced stores, so it’s normal to come across someone on the street or on social media that dresses exactly like you. When two people are seen twinning in the same outfit, whether accidentally or intentionally, people can’t help but ask themselves who’s rocking the outfit. This awkward coincidence can happen to anyone, and celebs are no exception.

Stars always step out in gorgeous looks when attending events. Their stylists tirelessly work to make them more unique at the event, but sometimes wearing the same outfits as anyone is inevitable. A-listers overcome the embarrassment and prove that they have good fashion taste.

Scrolling through to see 16 moments of celebs dressing as others. Salma Hayek was the first to wear this pearl Stella McCartney silk asymmetrical gown, with beaded detail on the shoulder, when she attended a The Art Of Elysium event in November 2008. We also saw Amanda Seyfried grace the red carpet on Sunday at the Golden Globe Awards wearing the same gown, which she complemented with a Daniel Swarovski clutch. Kate Winslet looked stunning whilst attending the Carnage Patis premiere. Her hair was styled into a simple updo and she wore black ankle-strap heels to complete her look. Liv Tyler put on the same dress but different color, accessorized with Christian Louboutin ‘Pigalle’ pumps. Ciara wore a cutout dress by Emilio Pucci to the Black Eyes Peas event. The rich chocolate hue is gorgeous against her skin. At Cannes, Jane Fonda put on a white version of the same frock with sparkly panels in place instead of the exposed flesh. Actress Felicity Jones and supermodel Bella Hadid are the muses of Dior. They took our breath away in this low-cut open-back Dior gown. Jones was in light make-up and a messy bun while Hadid looked fierce in a high bun and a sharp cat-eye. Rachel Weisz wore an orange Victoria Beckham dress to her “Oz the Great and Powerful premiere in Hollywood. She took a more simple route with accessories, opting for one gold cuff. Meanwhile, Aguilera walked the red carpet at the 2013 TIME Gala in New York City looking slim in the same black dress. Her gown hugged her shape perfectly. Jennifer Lopez attempted the same dress at Scott Barnes’s book launch in NYC. Her accessories of choice are ankle-strap Loubs and a chunky cocktail ring. We saw Heidi Klum in the same dress at Victoria’s Secret party. Charlotte Casiraghi looked stunning in a blue strapless bustier gown when attending the religious ceremony for the Royal Wedding of Prince Albert II of Monaco and Princess Charlene of Monaco. Her gown was accented with a jeweled belt. Sarah Jessica wore the same dress in red tonight on the red carpet for the “I Don’t Know How She Does It” Moscow Film Presentation with simple gold Fred Leighton jewels. Keira Knightley looked like a princess in a white dress. Her curly hair made her more attractive. Natalia Vodianova appeared in the same dress at Amfar Cinema Against AIDS 2008 Gala. Undeniably, both two were so beautiful. Celine Dion took to the red carpet for the 83rd Annual Academy Awards wearing an Armani Privé white organza long-sleeved gown. The singer kept her accessories to a minimum, choosing to add only a statement diamond necklace. We saw Penelope Cruz in a red version of the same dress at the “Pirates of the Caribbean: On Stranger Tides” Munich Premiere. The beautiful actress chose to pair the dress with matching satin heels, a boxy red clutch, and diamond stud earrings. Actress Blanke wore a ‘Very Prive” patent pumps and a pink simple dress at the 2009 CFDA Fashion Awards. The movie star, Angelina Jolie looked so pretty in the same dress but in different colors. Cameron Diaz wore the grey sporty frock to the 20th Century Fox’s special presentation of “The Other Woman”. A few months ago, Emilia Clarke put on the blue version for the 2014 AFI Awards At the Los Angeles premiere of the film “Precious”, Mariah Carey made many women jealous when appearing in a Zac Posen halter gown. In the other corner, we’ve got the pretty Kate, who wore the same black frock to the BAFTA awards. Kate Middleton wore this red Preen by Thornton Bregazzi dress on a trip to Canada. She added a diamond-encrusted maple leaf brooch and white drop earrings to make herself more attractive. A few months later, the dress made another appearance on the red carpet. This time, Mandy Moore chose a cobalt blue version of the design. The supermodel Irina Shayk hit the carpet in the Atelier Versace Fall 2016 black satin and crepe off-the-shoulder gown with a contrasting blue panel and bracelet-length sleeves. Meanwhile, Jane Fonda wore a modified version of the runway gown and she proved that at any age, the former fashion model still looks gorgeous.